There is a total of seven extreme-right groups that have been identified in Greek Police probes that are active in Thessaloniki, with a total of about 5,000 members or supporters. 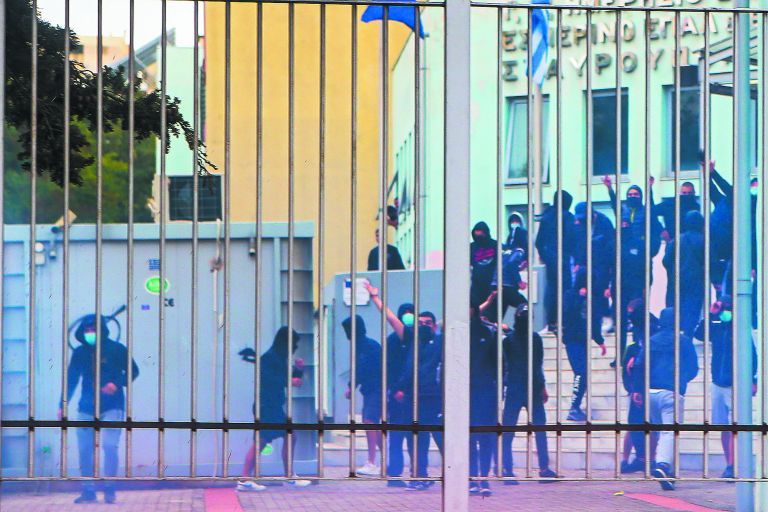 In the aftermath of last week’s shocking attacks by members of extreme-right and fascist organisations at Thessaloniki professional lyceums (EPAL), Greek Police is putting together the pieces of the puzzle of their expansive activity in Greece’s second largest city and their links to other far right groups throughout Greece and abroad.

The “Holy Battalion” (which stands for Greek racial superiority), The “Sacred Band”, which is active throughout Northern Greece, the “Autonomous Nationalists of Thessaloniki (that identifies ideologically with the Athens organisation “Combat 18”, which is responsible for 15 arson attacks in the capital), and “Vanguard Hellas”, which has extreme right members linked to the now defunct “Ideopolis Circle”, which ceased activity in 2018, are the top groups operating in the northern port city.

There is a total of seven extreme-right groups that have been identified in Greek Police probes – revealed in the Sunday edition of To Vima – and that are active in Thessaloniki, with a total of about 5,000 members or supporters, that combined constitute a small army.

A large segment of this “fascist” army is directly or indirectly linked to the outburst of violent attacks in the professional lyceum (EPAL) in the Stavroupolis area of Thessaloniki, in Evosmos, and to a lesser extent in Sykeona, Neapolis, and elsewhere - that have rocked Greek Police and political parties.

Educator acting as a “guide”

As To Vima reported, Greek Police has reliable information that at one of these EPALs, the main role in guiding extreme-right students was played by a teacher with similar views who has an important position in the lyceum.

He assisted students who are Nazi sympathisers in concealing their absences from school and in other ways as well.

Police also confirmed that many of the 100 individuals who were remanded in custody after the violent incidents at Thessaloniki EPALs were very active in anti-vaccination demonstrations in Thessaloniki, often along with their parents and relatives.

Some had previously been arrested for hooligan attacks – mainly by fans of PAOK FC – in Thessaloniki.

The main fear is the prospect of a revival of the “storm troops” and “cells” of the now defunct far-right Golden Dawn party, exactly one year after the party was outlawed by the Athens Appellate Court and it leadership jailed with 13-year prison sentences.

Security Police officials predict that if the violent incidents are not limited by the arrest of members of extreme-right groups – Greek Police headquarters in Athens has ordered a zero tolerance policy nationwide – the violence may spread through the entire city, possible triggering a response from the estimated 3,500 members of anti-authority groups, or from members of the youth wing of legitimate political parties, who may stage legal protests.

Moreover, the mayhem caused by the recent attacks may lead to protest occupations of schools and a spread of clashes.

Greek Police has discovered that at many of Thessaloniki’s professional lyceums fascist cells have been created, each with 20-80 members who are linked to Nazi-sympathising, extreme-right organisations.

It should be noted that in the 2015 general election, Golden Dawn garnered 9.3 percent of the vote in Stavroupolis and 7.27 percent in Thessaloniki’s First Electoral District.

Greek Police says that the top extreme-right organisation in Thessaloniki is “Sacred Band 12”, which has branches in Athens, Larissa, Amyntaio, and Germany.

With about 1,000 members, it is one of the largest extreme-right groups (four or five individuals have a leadership role). It was founded in 2012 and has played a leading role in violent clashes in Thessaloniki and in the city of Katerini in 2019. It has targeted even theatrical productions and former Thessaloniki Mayor Yannis Boutaris.

The organisation has participated in anti-vax protests and plays a central role at a football stadium gate with fanatic fans, who recently protested at the Thessaloniki International Fair against the ban on the entry of unvaccinated people at the city’s large Toumba football stadium.

Greek Police says it is a structured organisation that seeks to establish an operational role through the physical training of members and simulated exercises, similar to those once conducted in Golden Dawn “cells”.

TANEA Team 5 Οκτωβρίου 2021 | 18:23
Share
Δείτε επίσης
Περισσότερα άρθρα για Αγγλική έκδοση
We have the power to leave behind this unprecedented crisis. Editorial: Exiting the pandemic
Mitsotakis – Sisi meeting – Emphasis on energy and defense
What Seismologist Lekkas says Strong earthquake 6.1 Richter off Karpathos
Editorial: Attention must be paid
The European Union’s internal market had completely eliminated internal borders Op-ed: Fortress Europe?
The letter stresses US support for Athens’ dialogue with its neighbours Blinken underlines US ‘respect for sovereignty and territorial integrity’ in letter to Mitsotakis
The strategic dialogue was launched in Washington in December, 2018 US-Greece strategic dialogue covers all levels of bilateral, regional, international cooperation
The main duty of the state is to protect the lives and property of citizens Editorial: Prevention
Cyprus to brief permanent members of UN Security Council on Turkey's moves to re-open Varosha
She is a bright example of a politician who fearlessly and boldly is confronting her new challenge Editorial: Fofi, stand strong!
The enormous August wildfires prepared us for the fires of the future Editorial: Everything must come to light
We must discuss solutions refugees may provide for the productive process Editorial: Contributing to society
Greece is a pole of stability in the region and is a member of both NATO and the EU Editorial: Geopolitical opportunities
The original agreement in 1990 had an eight-year duration Exclusive interview with FM Nikos Dendias: ‘The US recognises Greece’s strategic position’
Apostolakis dodged a question on whether he plans to run on SYRIZA’s ticket Former SYRIZA defence minister supports procurement of French Belharra frigates