Syriza blasts organisers of the huge FYROM rally, even as.New Democracy leader Kyriakos Mitsotakis charges that the massive protest demonstrates that Greeks do not trust the government to handle crucial national issues. 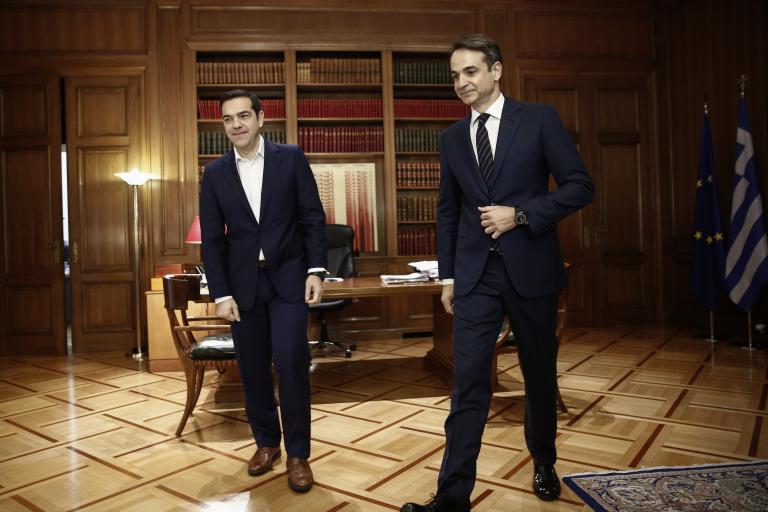 The ruling Syriza party has issued a statement blasting the organisers of the huge rally against FYROM using the name Macedonia, and identifying main opposition New Democracy with the far right Golden Dawn party.

“Today’s demonstration completely belied the expectations of its organisers, who over the last few days raised the bar of massive participation, assisted by a large segment of the media, which acted as communications sponsors.

The nationalist and intolerant message in the speeches, and the presence of the entirety of the Golden Dawn party, determined the message. Moreover, the presence of the former prime minister and ex-New Democracy leader Antonis Samaras, highlighted the opportunistic stance of the main opposition party, which does not hesitate to place its bets in full coordination with the far right, to divide the Greek people, and to exploit its patriotic concerns,” read the Syriza party statement.

“Mr. Mitsotakis’ stance on this issue is a monument of hypocrisy and irresponsibility, as it does not dare to clarify in the public debate its position on the (FYROM) naming issue, despite the fact that in the recent past New Democracy handled the issue while in power,” the party statement read, while expressing support for the government’s management of the issue.

“The peaceful coexistence of peoples, and security and stability in the Balkans, are the strongest guarantees of guarding the national interests, and express the quest of the majority of the Greek people for a future beyond dead-end and pointless isolationism,” the statement concluded.

In a harsh attack against the government, main opposition New Democracy leader Kyriakos Mitsotakis charged that the massive protest demonstrates that Greeks do not trust the government to handle crucial national issues.

“New Democracy, and I personally, from the first moment supported the right of citizens to demonstrate freely, peacefully, and democratically, as the Constitution mandates. Today’s expression of national pride by hundreds of thousands of citizens who descended on Syntagma Square from every corner of the country, had no partisan tinges. No one can exploit politically such a large demonstration. Yet, citizens today expressed their anguish,” Mitsotakis’ statement reads.

“There is a lack of trust in a government which, instead of cooperating from the start with the opposition in order to determine together a national position, did all in its power to divide the political parties and the Greek people, on a crucial national issue. Mr. Tsipras did not attempt to forge national unity. He displayed contempt for the patriotic sentiments of citizens. He sowed winds and is reaping storms. It is obvious that Greeks no longer trust Mr. Tsipras, Mr. Kammemos (defence minister and leader of junior coalition partner Independent Greeks), or (foreign minister) Mr. Kotzias, to negotiate anything, much less a major national issue,” Mitsotakis said.

TANEA Team 4 Φεβρουαρίου 2018 | 22:53
Share
Περισσότερα άρθρα για Αγγλική έκδοση
Both SYRIZA and PASOK are in a transitional phase Editorial: Changes
Tsipras posts on the social media and frequently as possible Editorial: Obligations
Universities have become a sort of state within the state Editorial: Enough is enough!
Nobody for whatever reason has the right to beat a professor Editorial: Zero tolerance
The shift in America’s priorities should come as no surprise Editorial: Fluidity
We have the weapons, the experience, and obviously the collective will Editorial: Transcending the pandemic
How do you negotiate with Vladimir Putin? Editorial: Dilemma
Editorial: Phenomenon
Maintaining tensions does not contribute to dialogue or good neighbourly relations Editorial: Pragmatism in Greek-Turkish relations
The alarm bell of daily life is urgently ringing Editorial: Alarm bell
We believe that the projections of scientists are exaggerated. They are not. Editorial: Living dangerously
It is up to us to exit the pandemic on our feet Editorial: Caution
The cost of a total lockdown would be very high for the economy Editorial: The need for personal responsibility, again
Banks – They secure short-term loans to provide new ones
Price increases in energy threaten the viability of businesses