Tsipras offered Mitsotakis assurances that he took up the matter neither to divide nor to unite any other party. 'I have a responsibility to the country,' he said about the need to settle disputes with Skopje. 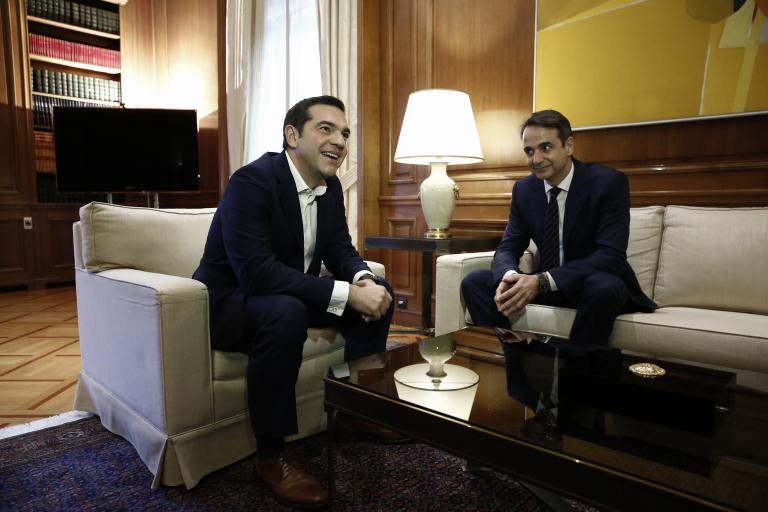 “I have a responsibility to the country,” was Prime Minister Alexis Tsipras’ statement, on the need to settle disputes with Skopje, to main opposition New Democracy leader Kyriakos Mitsotakis, during their recent discussion of the FYROM naming issue, according to a well-informed governmental source.

This is what has been reported by the state-run Athens and Macedonian News Agency, which said that when Mitsotakis accused Tsipras of rekindling the FYROM issue to divide New Democracy, Tsipras offered assurances that he took up the matter neither to divide nor to unite any other party.

Tsipras said that as long as he holds the office of prime minister, he bears a responsibility to the country and its history (to resolve the dispute with Greece’s northern neighbor) .

“Would that Mr. Tsipras had realised (this responsibility) prior to his meeting with Mr. Mitsotakis, as he may have avoided the petty partisan handling of the Skopje issue,” New Democracy said in an informal briefing.

TANEA Team 3 Φεβρουαρίου 2018 | 23:46
Share
Περισσότερα άρθρα για Αγγλική έκδοση
This young woman heard the message of other women that preceded her Editorial: Catharsis
Balances with the Russian side are very delicate and must be maintained Editorial: Composure
'Greece is a significant and wise actor in this part of Europe' Kosovo FM Donika Gervalla–Schwarz: ‘We are not begging for recognition from Greece’
People want answers, persuasive plans, and arguments Editorial: Maturation
The pandemic and citizens’ fears regarding inflation have shocked households Metron Analysis poll: SYRIZA trails New Democracy, KINAL-PASOK skyrockets
It is imperative for the weapons programme to be implemented immediately Editorial: Arrivals
The charges of the victim garnered attention nationwide Editorial: Support
Greece is a peaceful Western country Editorial: Vigilance
Both SYRIZA and PASOK are in a transitional phase Editorial: Changes
Tsipras posts on the social media and frequently as possible Editorial: Obligations
Universities have become a sort of state within the state Editorial: Enough is enough!
Nobody for whatever reason has the right to beat a professor Editorial: Zero tolerance
The shift in America’s priorities should come as no surprise Editorial: Fluidity
We have the weapons, the experience, and obviously the collective will Editorial: Transcending the pandemic
How do you negotiate with Vladimir Putin? Editorial: Dilemma