The Prime Minister Kyriakos Mitsotakis had a meeting with the President of the Arab Republic of Egypt, Abdel Fattah Al Sisi, at the Maximos Mansion, on the sidelines of the 9th Tripartite Summit of Greece – Cyprus – Egypt. During the meeting of the two leaders, the excellent level of bilateral relations was confirmed, while […] 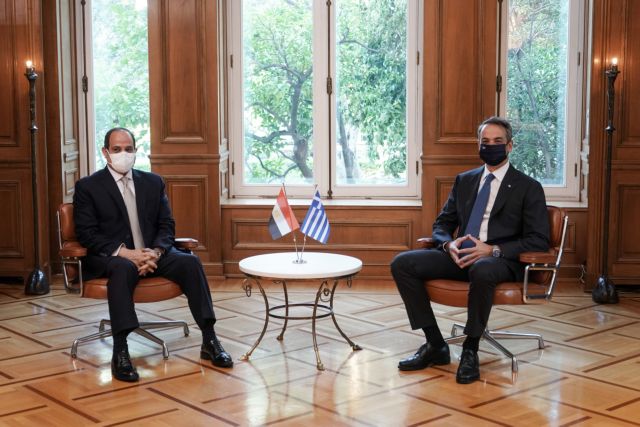 The Prime Minister Kyriakos Mitsotakis had a meeting with the President of the Arab Republic of Egypt, Abdel Fattah Al Sisi, at the Maximos Mansion, on the sidelines of the 9th Tripartite Summit of Greece – Cyprus – Egypt.

During the meeting of the two leaders, the excellent level of bilateral relations was confirmed, while emphasis was placed on the fields of energy and defense. Developments in the Mediterranean and the wider region, which call for the development of the EU-Egypt strategic relationship, were also discussed.

The Prime Minister briefed the President of Egypt on the recent provocative moves of Turkey, emphasizing its destabilizing role in the wider region. He reiterated his readiness for dialogue and rapprochement on the condition of respecting the international law, sovereignty and sovereign rights of our country and refraining from provocative actions. In addition, he briefed Mr. Sisi on the recent strategic moves of Greece in the diplomatic field, which confirm and strengthen its role as a pillar of stability and security in the wider region and open new prospects for closer cooperation with countries that have the same priorities for the Eastern Mediterranean. , like his girlfriend Egypt.

They also discussed the latest developments in the Cyprus issue and in Lebanon, a country with which Greece, Cyprus and Egypt maintain excellent relations and to which they provide firm support, as well as the developments in Libya and the prospects for the country after the elections.

TANEA Team 19 Οκτωβρίου 2021 | 12:56
Share
Περισσότερα άρθρα για Αγγλική έκδοση
The virus recognises no geographical borders Editorial: Nobody is safe
Delays and foot-dragging have long led even to the denial of justice Editorial: Expediting justice
Erdogan’s insistence on keeping interest rates low led him to fire three central bankers Editorial: Turkey’s lonesomeness
Turkey traditionally exports its domestic crises Editorial: Turkey's domestic, foreign crises
Nobody has the right to deny their share of responsibility in the common effort Editorial: Joining forces to confront the pandemic
Of intubated patients, 83 percent are unvaccinated or partially vaccinated EODY: 105 COVID-19 deaths, 7,287 infections confirmed in the last 24 hours, 608 intubated
We must continue to insist that the state is obliged to be citizen-friendly Editorial: 'Guinness World Record'
Behind Lukashenko stands Putin, who backs and assists him Editorial: European sovereignty
The pandemic is an issue of life and death, and the protection of public health is a common aim Editorial: Consensus on managing the pandemic, even at the last minute
The measures announced are tantamount to an at least partial lockdown on the unvaccinated Mitsotakis announces partial lockdown on unvaccinated citizizens, tougher enforcement
Greece accuses Sanchez of ignoring EU decisions after agreement to sell aircraft carrier to Turkey
Anti-vax lawyer arrested for dissemination of fake news on COVID-19, then released
Adjustment to contemporary conditions and conceptions is necessary Editorial: Modernisation of the Church
KINAL is nearly or even over ten percent in all opinion polls Editorial: Opportunity for the Greek centre-left
Suspension of Najla Mangough: What Does it Mean?