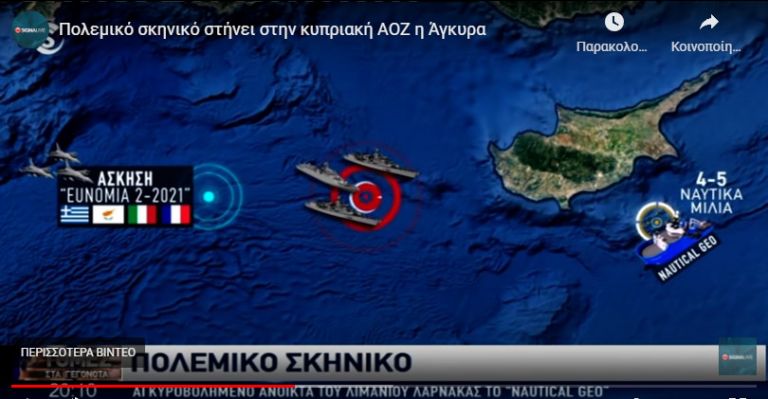 Ankara is flexing its military muscle in Cyprus’ Exclusive Economic Zone (EEZ) in an apparent effort to torpedo efforts to proceed with the construction of the EastMed pipeline by imposing its own maps and pushing its expansionist theory of the “Blue Motherland” at sea.

Cypriot government sources have revealed to Cyprus’ Sigma television that three Turkish warships – two frigates and a corvette – are in the area southwest of Cyprus in order to block the Nautical Geo research vessel.

The warships are essentially occupying an area of Cyprus’ EEZ for which Nicosia issued a NAVTEX days ago. The vessel was conducting research in the same area until recently.

The Nautical Geo – which is conducting research at the behest of Cyprus, Greece, and Israel – has anchored four nautical miles off the port of Larnaca.

Ankara is invoking a NAVTEX it illegally issued in order to conduct military exercises in the area which, however, it has not commenced.

Meanwhile, not far from the area in which the Turkish warships are stationed Greece, France, and Italy are conducting joint air and sea military exercises.

In response to Turkey’s illegal NAVTEX, Greek and French warplanes on 5 October flew over the area that it covered.

After being harassed by a Turkish frigate off the coast of Crete, the Nautical Geo arrived in Cyprus’ EEZ on 28 September and began its research in the area.

Meanwhile, on two October the Turkish research vessel Oruc Reis arrived in the same area, accompanied by Turkish warships, one of which threatened the Nautical Geo, which then withdrew from the area.

Consequently, on 2 October and the following day the Oruc Reis operated in the area unhindered.

According to the latest information, the Oruc Reis has docked in the Turkish port of Antalya, but Ankara’s three warships remain in place.

The Republic of Cyprus has for days been monitoring Turkey’s moves and has responded with charges on the diplomatic level.

The two delegations discussed the delimitation of maritime zones in the Aegean and the Eastern Mediterranean.

A key obstacle is Ankara’s demand for the demilitarisation of the Greek islands that are near the Turkish coast.

The talks are scheduled to resume in six months in Athens.

TANEA Team 7 Οκτωβρίου 2021 | 13:42
Share
Περισσότερα άρθρα για Αγγλική έκδοση
The European Union’s internal market had completely eliminated internal borders Op-ed: Fortress Europe?
The letter stresses US support for Athens’ dialogue with its neighbours Blinken underlines US ‘respect for sovereignty and territorial integrity’ in letter to Mitsotakis
The strategic dialogue was launched in Washington in December, 2018 US-Greece strategic dialogue covers all levels of bilateral, regional, international cooperation
The main duty of the state is to protect the lives and property of citizens Editorial: Prevention
Cyprus to brief permanent members of UN Security Council on Turkey's moves to re-open Varosha
She is a bright example of a politician who fearlessly and boldly is confronting her new challenge Editorial: Fofi, stand strong!
The enormous August wildfires prepared us for the fires of the future Editorial: Everything must come to light
We must discuss solutions refugees may provide for the productive process Editorial: Contributing to society
Greece is a pole of stability in the region and is a member of both NATO and the EU Editorial: Geopolitical opportunities
The original agreement in 1990 had an eight-year duration Exclusive interview with FM Nikos Dendias: ‘The US recognises Greece’s strategic position’
Apostolakis dodged a question on whether he plans to run on SYRIZA’s ticket Former SYRIZA defence minister supports procurement of French Belharra frigates
In health matters as in politics, along with coercion there is also prevention Editorial: The far right-anti-vaxxers osmosis
Editorial: Supply and demand
Concerns over a potential rebound of Golden Dawn followers are widespread Editorial: The duty to combat the far right
Athens University's Applied Evolutionary Virology Group led the study Greek team leads research on role of millions of years old ‘dark genome’ in severe, long-term COVID