A lawyer by training, Tasoulas served as Culture and Athletics Minister in the New Democracy government of Antonis Samaras. 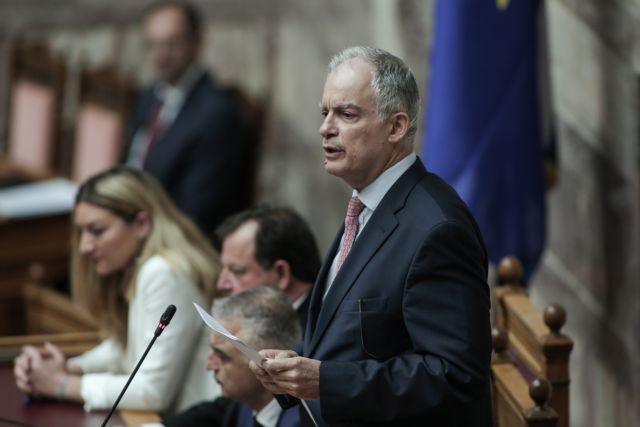 Veteran New Democracy MP (representing the district of Ioannina) Konstantinos Tasoulas has been elected Parliament Speaker with an unprecedented 283 votes in the 300-seat legislature.

Tasoulas was supported by five of the legislature’s six parties (New Democracy, SYRIZA, Movement for Change, Elliniki Lysi, and MeRa 25).

Only MPs of the KKE Greek Communist Party declared themselves “present” during the vote.

“The Greek people must understand from our behaviour that the national legislature, the system of representative parliamentary democracy, can express them, and make them feel proud of it with improvements and self-criticism. This is a difficult task, indeed colossal, but it is not Sisyphean as we will not lose. It is worthwhile for the six parties in Parliament to work together so that we may attempt this. One must upgrade the symbolic value of the Parliament in the eyes of the Greek people, as it has suffered terrible blows, particularly over the last 10 years,” Tasoulas said at today’s handover ceremony with outgoing Speaker Nikos Voutsis.

Tasoulas was a protégé of the late Evangelos Averoff (whose private secretary he was from 1981-1989), a broadly respected patrician in the ranks of Greek conservatism who was a close associate of the late PM and President Constantine Karamanlis at least since the 1950’s.

A lawyer by training, Tasoulas served as Culture and Athletics Minister in the New Democracy government of Antonis Samaras.

Previously Tasoulas was active in politics in the posh northern Athens suburb of Kifisia, serving as mayor from 1994 to 1998.

Before that he had served as special advisor at the then ministry of economy, commerce, and agriculture (1989-1990) and later as president of the Organisation for the Promotion of Exports (OPE, 1990-1993).

The 300-member legislature was sworn in on 17 July and Archbishop Ieronymos of Athens and All Greece administered the religious oath for those that chose it.

Επιδότηση έως 85% για... πράσινα σπίτια - Ολο το πρόγραμμα
TANEA Team 18 Ιουλίου 2019 | 16:13
Share
Δείτε επίσης
Περισσότερα άρθρα για Αγγλική έκδοση
Olympiacos FC statement
Greece’s success in securing its interests at the EU summit shows the way Editorial: Opportunity
Ever since Syriza lost the July, 2019, elections it has appeared unable to adjust to its new role as main opposition party Editorial: Shoestrings
Why Russia? The answer is quite simple for those in the know  Hagia Sophia, Turkey, Russia and the West
Lights of hope: From Olympiacos Piraeus to the World
To continue to confront the coronavirus successfully one needs a combination of state care and individual responsibility Editorial: Time
Britain’s Ocado sees retail sales soar 27% in lockdown half