Bundesbank chief visits Athens to be briefed on reforms

'Over the past few years, people in Germany, myself included, have sympathised deeply as Greece has fought to repair its economy,' Weidmann said. 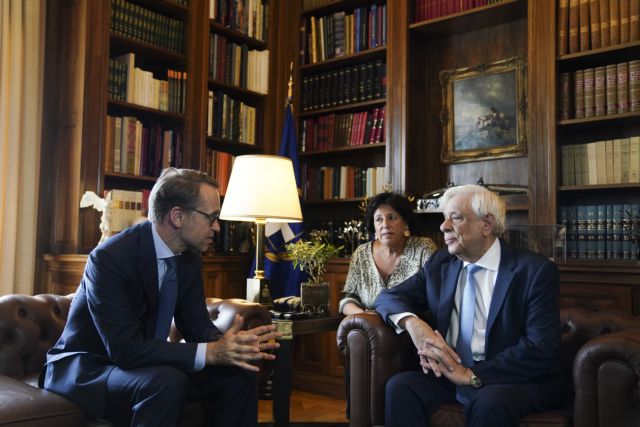 The course of Greece and its economy after the completion of the third bailout memorandum was the focus of Deutsche Bundesbank President Jens Weidmann’s talks in Athens today with Greece’s political leadership.

"The talks in Athens will allow me to learn more about the reform process through which the Greek government seeks to boost economic activity and increase employment levels," Weidmann told Ta Nea in a statement.

"Over the past few years, people in Germany, myself included, have sympathised deeply as Greece has fought to repair its economy," Weidmann said.

"We hope for a strong, prosperous partner country whose citizens feel that they will benefit from the upcoming economic recovery," he underlined.

Weidmann supports the elimination of the European Central Bank’s loose monetary policy, and insists on the continuation of reforms.

Weidmann has extensive knowledge of the realities in Greece and played a leading role in the Greek crisis, in his capacity as German Chancellor Angela Merkel’s economic advisor in 2010, when Greece  signed its first bailout memorandum, and later as chief of the Deutsche Bundesbank as of 1 May, 2011.

Today, Weidmann is considered the favourite to succeed Mario Draghi in October, 2019, as president of the European Central Bank, even though he has not officially announced his candidacy for the position.

The full text of Weidmann's major address to the Hellenic Bank Association can be found at  the link below.

TANEA Team 30 Αυγούστου 2018 | 22:28
Share
Δείτε επίσης
Περισσότερα άρθρα για Αγγλική έκδοση
European supervised drug consumption sites have been an inextricable part of drug treatment Editorial: The first step
The overturning of Roe v. Wade turns the clock back 50 years for American women. Editorial: Back and forth
Thymios' statement - “I no longer trust people.” – is a punch in the gut. Editorial: A punch in the gut
Editorial: Audits of politicians' wealth
Mario Draghi has a prominent position in the EU architecture Editorial: Alliance
After a certain point, the necessary caution is a matter of personal responsibility Editorial: COVID-19 and personal responsibility
Extremists still constitute a threat Editorial: Threat
A consciously responsible stance is needed Editorial: Maintaining COVID-19 alertness
The late PM Constantine Karamanlis famously said, 'We belong to the West' Editorial: Contradictions
The end of EU enhanced fiscal supervision signals the exit from the tunnel Editorial: Breakthroughs
Head of Greek Pomaks’ Association rips into Erdogan’s revisionist expansionism
All Greek governments since Andreas Papandreou's demanded the return of the Marbles Osborne: ‘Deal to be done’ on sharing Parthenon Marbles
All efforts toward a radical resolution of the refugee problem have failed Editorial: The end does not justify the means
France's centrist forces are rallying behind President Emmanuel Macron Editorial: The political centre
The Germans are returning, this time not to impose their will but to cooperate Editorial: Greece as a bridge between Western Balkans, EU