FYROM's PM rules out constitutional change, says talks with Greece all about name

“In this process we must be driven by facts. I have no dilemma that when it comes to the geographical territory of Macedonia, we take its northern or upper part, the southern part belongs to Greece and the eastern part to Bulgaria,” FYROM’s prime minister said. 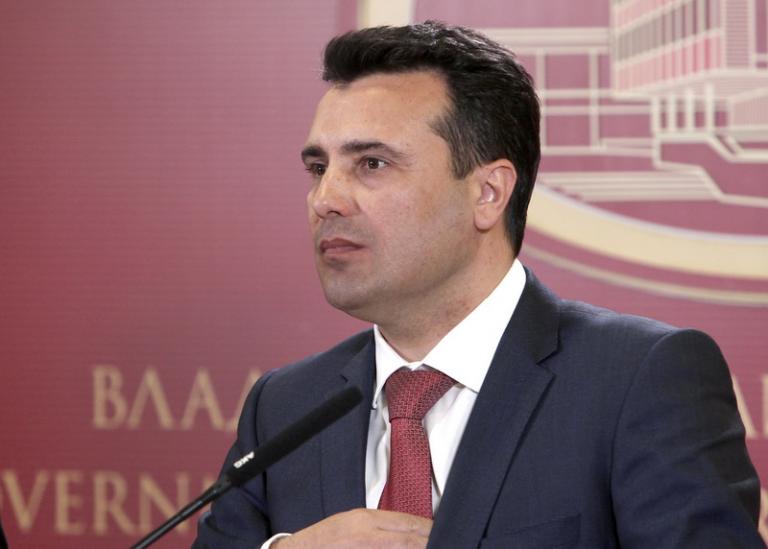 FYROM Prime Minister Zoran Zaev expresses a hard line on Greek demands for a constitutional change to eradicate vestiges of irredentism, and dismisses any deal that would challenge the existence of a “Macedonian” nation and language, in an interview with the Balkan Insight website.

Zaev is categorical when asked about the prospect of amending FYROM’s constitution. “Both sides should not bring up issues that would make a solution impossible,” he declared.

Moreover, he essentially rules out any concessions by Skopje beyond adding a qualifier to the country’s constitutional name.

“We must not forget that the problem revolves around the name. We should not tackle things that will cause additional problems which will only bring us further away from a solution,” he declared.

It is to Skopje’s intransigence on the issues of language and ethnicity that Zaev alludes when he uses the words identity and dignity: “I retain the same feeling that leads me right from the start - that a solution is possible. But at the same time, we remain convinced that this solution must protect the identity and the dignity of both sides.”

Zaev also alludes to the influence of Turkey and Russia, which are considered by the Greek side as wanting to scupper a solution – Turkey in order to restore the influence that the Ottomans once had in the Balkans, through the manipulation of Muslim minorities, and Russia in order to avert FYROM’s admission to Nato, an eventuality that would stem Russian influence in the region.

“My wish and ambition, as well as of each of us that are involved in this process, is to reach a solution for the name dispute by the end of March,” he says. “It will not help us if we delay it because there are always antagonistic forces that are against a solution,” Zaev said.

In effect, Zaev is arguing that Greece must be satisfied by verbal assurances of Skopje’s denunciation of decades-long irredentist propaganda, which centres on the theory, taught in school books, that the real borders of the Slavo-Macedonians are Thessaloniki and the Aegean.

“In this process we must be driven by facts. I have no dilemma that when it comes to the geographical territory of Macedonia, we take its northern or upper part, the southern part belongs to Greece and the eastern part to Bulgaria,” FYROM’s prime minister said.

Interestingly, Zaev attributes Skopje’s fervent desire to strike a deal by June to the aim of receiving an invitation to start EU accession talks, which Brussels and Berlin have made clear requires major domestic reforms, rather than his government’s hopes for an invitation to join Nato at the Alliance’s July summit.

“It would be good to wrap this up by June because that would encourage a decision (by Brussels) for start of EU accession negotiations. I am aware that each passing month (without a solution) will not go in our favour,” he told Balkan insight.

TANEA Team 23 Φεβρουαρίου 2018 | 19:01
Share
Περισσότερα άρθρα για Αγγλική έκδοση
Both SYRIZA and PASOK are in a transitional phase Editorial: Changes
Tsipras posts on the social media and frequently as possible Editorial: Obligations
Universities have become a sort of state within the state Editorial: Enough is enough!
Nobody for whatever reason has the right to beat a professor Editorial: Zero tolerance
The shift in America’s priorities should come as no surprise Editorial: Fluidity
We have the weapons, the experience, and obviously the collective will Editorial: Transcending the pandemic
How do you negotiate with Vladimir Putin? Editorial: Dilemma
Editorial: Phenomenon
Maintaining tensions does not contribute to dialogue or good neighbourly relations Editorial: Pragmatism in Greek-Turkish relations
The alarm bell of daily life is urgently ringing Editorial: Alarm bell
We believe that the projections of scientists are exaggerated. They are not. Editorial: Living dangerously
It is up to us to exit the pandemic on our feet Editorial: Caution
The cost of a total lockdown would be very high for the economy Editorial: The need for personal responsibility, again
Banks – They secure short-term loans to provide new ones
Price increases in energy threaten the viability of businesses