Tsipras may have verbally expressed annoyance but in fact he continues to offer political cover to the phenomenon of Polakism . 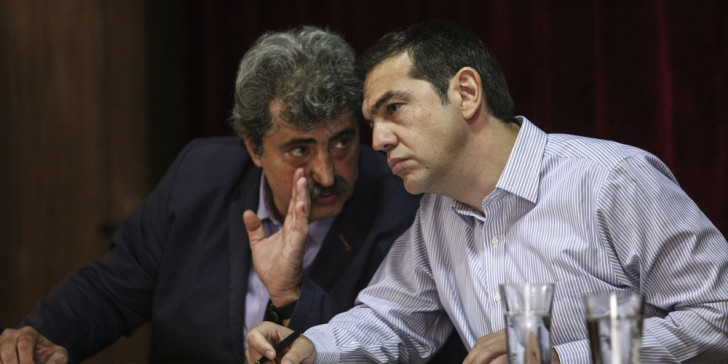 His actions and horribly vulgar manner of speaking have created a new vocabulary that he uses against his political opponents.

It is a brutal and cynical brand of political speech that appeals to the most base popular instincts in social media and does not have a shred of institutional and political seriousness and culture.

The last incident was a photograph that he posted of himself at a meal with friends where at a dramatic juncture in the development of the pandemic he thumbed his nose at the public health measures with which his fellow citizens are required to comply.

As a doctor and former alternate health minister he should have known better and exhibited exemplary behaviour. Instead he flouted the rules.

Obviously the problem is not just Polakis himself, but rather Syriza leader and former PM Alexis Tsipras.

Tsipras may have verbally expressed annoyance but in fact he continues to offer political cover to the phenomenon of Polakism even as he demands the appointment of a mutually acceptable health minister and purports to seek consensus in these difficult hours.

It is by now clear that Tsipras and Polakis are one and the same politically.

The coarse native of the Cretan town of Sfakia, which is historically known for its bravery, is not the exception in Syriza but rather an organic part of the party.

Hence, Mr. Tsipras need not seek formulas for a serious and creative opposition.
That is all a ruse.

TANEA Team 12 Νοεμβρίου 2020 | 22:04
Share
Δείτε επίσης
Περισσότερα άρθρα για Αγγλική έκδοση
We have the weapons. We have fine scientists. We have the experience. We can. Editorial: Urgency
There were delays and tragic omissions in offering proper services to patients Positive Voice in a rough terrain: A look back at the history of HIV/AIDS in Greece
Greece has a multi-faceted policy in its foreign relations and that is how it should continue Editorial: Sobriety in foreign relations
We see irresponsible behaviours and an attitude that the virus is no longer with us Editorial: Behaviours
The virus recognises no geographical borders Editorial: Nobody is safe
Delays and foot-dragging have long led even to the denial of justice Editorial: Expediting justice
Erdogan’s insistence on keeping interest rates low led him to fire three central bankers Editorial: Turkey’s lonesomeness
Turkey traditionally exports its domestic crises Editorial: Turkey's domestic, foreign crises
Nobody has the right to deny their share of responsibility in the common effort Editorial: Joining forces to confront the pandemic
Of intubated patients, 83 percent are unvaccinated or partially vaccinated EODY: 105 COVID-19 deaths, 7,287 infections confirmed in the last 24 hours, 608 intubated
We must continue to insist that the state is obliged to be citizen-friendly Editorial: 'Guinness World Record'
Behind Lukashenko stands Putin, who backs and assists him Editorial: European sovereignty
The pandemic is an issue of life and death, and the protection of public health is a common aim Editorial: Consensus on managing the pandemic, even at the last minute
The measures announced are tantamount to an at least partial lockdown on the unvaccinated Mitsotakis announces partial lockdown on unvaccinated citizizens, tougher enforcement
Greece accuses Sanchez of ignoring EU decisions after agreement to sell aircraft carrier to Turkey