A state, cannot rely on good fortune to protect its citizens. It has a duty to take all necessary measures so that such a tragedy will not be repeated in Kineta or any other part of the country. 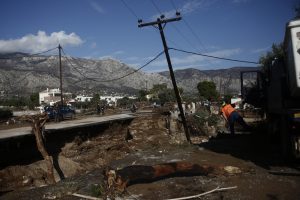 About one year ago Ta Nea in a report highlighted the lack of anti-flooding works in Kineta.

"Kineta is in danger of becoming another Mandra, (where 24 people died in major flood"" the title of the report read.
The aim of the report was obviously not to scare people but rather to inform the public. It was not prophetic. It was certain that at some point Kineta would become another Mandra

It happened yesterday fortunately without mourning victims as occured with the November, 2017 ,Maqndra flood in which 24 people died.

A state, however, cannot rely on good fortune to protect its citizens. It has a duty to take all necessary measures so that such a tragedy will not be repeated in Kineta or any other part of the country.

The government is obliged to act immediately to prevent the next natural disaster that may arise and afflict the country. No excuse is acceptable in a period of extreme weather conditions that are ever more frequent.

There are solutions that can limit the repercussions, and particularly the loss of lives. However it requires vigilance and acknowledgement of the fact that a tragic event can occur at any moment.

Yestrday's flooding in Kineta was not a prophecy. It was clear proof.

Χρυσές Σφαίρες 2021: Αναβάλλεται η απονομή στην σκιά του κοροναϊού
TANEA Team 26 Νοεμβρίου 2019 | 21:24
Share
Δείτε επίσης
Περισσότερα άρθρα για Αγγλική έκδοση
German pig farmers suffer after abattoir’s closure
China braces for more rainstorms over weekend, climate change blamed
SYRIZA is battling to be the first party never to remove its head from the sand Editorial: Self-criticism
Democratic rule is not a given but it has strong antibodies and decades of experience Editorial: Judiciary
Dermitzakis sees task of National Council on Research, Technology and Innovation as key to economic recovery
Everything must come to light now! Editorial: Let everything come to light
Given the fact that Greece did very well in the first phase of the pandemic we can do it again now. Editorial: Restart
One can buttress a new type of citizen-friendly state and a public administration that will rely on expedite digital reform Editorial: State
Shadows, rumours about apartment owned by Greek Orthodox Archdiocese of Australia
The pandemic was a difficult test for students and teachers Editorial: Expectations
A key parameter is the alignment with Italy in the area of resources and fishing policy. Editorial: An historic agreement
Move over Marvel: migrant workers star as superheroes in Latino comic book
Sea, sand and social distancing: Caribbean reopens to tourism