Hatzidakis said that for PPC to be viable in the coming year possibly over 900mn euros will be required. 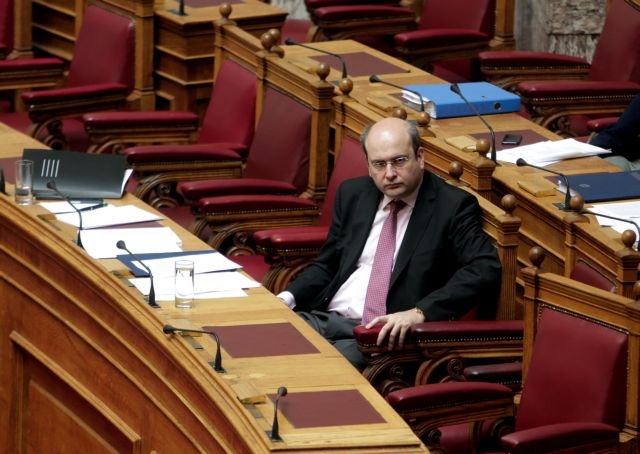 The plan to save the Public Power Corporation (PPC) was presented today by Energy Minister Kostis Hatzidakis who briefed the Parliamentary Committee on Production and Commerce on the government’s efforts to clean up the company.

He said that without these planned measures there would be dramatic consequences when on 24 October Ernst and Young is expected to announce its viability report for the company.

“Many would not envy our position, yet we must do the best we can… We want to save the company. If PPC collapses then the country collapses and I want that to be understood both domestically and in Brussels,” Hatzidakis declared.

‘No buyers for PPC, privatisation not an issue’

As regards the supposed sell-off of PPC Hatzidakis said, “Some say that we want to privatise PPC. My response to them is to worry not. There are no buyers. There are no crazy people who would choose to invest.”

Hatzidakis said that for PPC to be viable in the coming year possibly over 900mn euros will be required.

“The markets understand our intention to protect the company,” Hatzidakis declared.

He said that prior plans during the Samaras administration to create a small PPC have been abandoned.

Referring to NOME electricity auctions in which PPC sold electricity below cost, Hatzidakis said that PPC lost 600mn euros which its competitors gained.

As reagrds delinquent debt to PPC, Hatzidakis said it leaped from 1.4bn euros to 2.5 billion euros in 2018.
He said the government’s intention is not to chase poor people and that for half of delinquent debt only 60,000 people and businesses who owe 800mn euros are responsible.

Hatzidakis announced immediate measures to bolster PPC’s liquidity and tomorrow PPC’s Board will discuss the rationalisation of pricing.

He also said the government will reduce the home electricity discounts for PPC employees from the current 75 percent to 30 percent.

The discount for those who pay their electricity bills on time will be reduced from 10% to 5% and the benefit for each household will be 2.5 euros monthly, according to Hatzidakis.

He also spoke of plans,which began under the company's previous management, to securitise part of the delinquent debt, and said this will help solve the company’s liquidity problem.

Παγκόσμιες συγκρούσεις αναμένει το Ρωσικό Συμβούλιο Διεθνών Σχέσεων – Τι αναφέρει σε έκθεσή του
TANEA Team 29 Αυγούστου 2019 | 23:58
Δείτε επίσης
Περισσότερα άρθρα για Αγγλική έκδοση
The president-elect of Greece has won people over even before assuming office Editorial: Modesty
Marinakis just dealt the final blow to the so-called ‘clean-up’ of Greek Football in front of UEFA/FIFA
The dialogue Marinakis to Grammenos: «You have been doing anything that Savvidis was telling you for such a long time and now you’ve become sensitive?»
President-elect Ekaterini Sakellaropoulou symbolises Greece’s passage to a new era with greater consensus and less toxicity Editorial: A victory for democracy
'Our country is governed by the rule of law and is a force of stability, growth, and culture' President-elect Sakellaropoulou to focus on defending rights, sovereignty
Turkey’s provocations are non-stop Editorial: Audacity
Hospitals should not be excluded from public-private partnerships Editorial: Partnerships
The government in Tripoli has said that Greece 'has nothing substantial to offer'. Haftar in Athens, Greece to veto EU approval of Libya peace deal if MOU with Turkey not canceled
The nominee has the prestige and wherewithal to serve the office in a worthy manner Editorial: Consensus
The last president who was not a politician was Christos Sartzetakis who served between 1985-1990 In historic move, Mitsotakis taps Council of State chief to serve as first woman president
Realism at all levels and in every way must be the only guide Editorial: Realism
Greece cannot be punished ad infinitum for the errors of the past Lower primary surplus targets key to Greek economic growth
Indian slaves swap life of bondage for seat in boardroom at tea plantation
Editorial NEA: Puzzle
EU resumes probe into Boeing-Embraer deal, sets new April 30 deadline