Zaev said he expected fresh Greek investments to exceed €500m. 'The Republic of North Macedonia will have huge economic benefits from the deal that I believe will be seen in every area of the economy,' Zaev said. 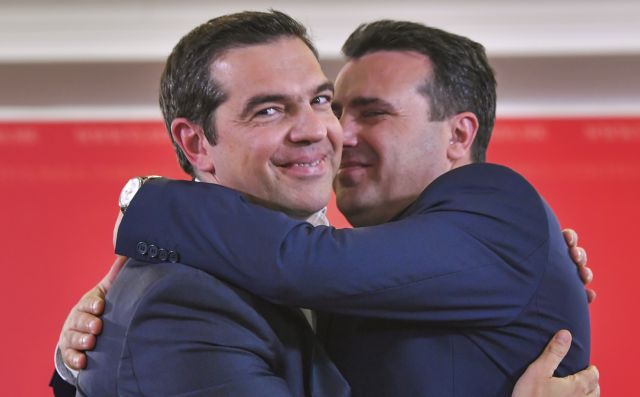 International media outlets reported on PM Alexis Tsipras’ historic visit to North Macedonia today, the first since it was established as an independent state in 1991, with the breakup of Yugoslavia.

Indeed, it was the first visit of a Greek PM since the “Republic of Macedonia” was established as part of Yugoslavia.

The country’s name was changed to North Macedonia after the Prespa Agreement concluded by Tsipras and his counterpart Zoran Zaev.

The BBC reported on the history of the name dispute and the selfie taken by the two prime ministers, which seemed to impress much of the media.

“Tweeting the selfie, Mr Zaev referred to ‘happy moments for an even happier future for the peoples of our friendly countries’,” the BBC reported.

“The two men signed a series of agreements before holding a joint news conference, in which Mr Zaev spoke of his opposite number as a "close, personal friend", the report added.

The Guardian’s report also referred to the widespread popular disapproval of the accord in both countries and that the two leaders are touting the trade and other benefits that they say will result from the normalisation of the two countries’ relations.

The report stated that:

“On the eve of the visit, Zaev said he expected fresh Greek investments in the impoverished state to exceed €500m. ‘The Republic of North Macedonia will have huge economic benefits from the deal that I believe will be seen in every area of the economy.’

“The two states’ foreign ministers will also use the occasion to sign a memorandum highlighting the need for North Macedonia’s accession process to the EU to be fast-tracked. Prior to the accord, Greece had vetoed its tiny neighbour launching membership talks with Nato and the EU,” The Guardian reported, cutting AFP.

Greece as protector and ally

“Greece will be your main ally and protector with regards to political stability, economic cooperation and development,” Tsipras said, describing the visit as ‘historic’,” the report added.

“On his (Tsipras’) trip, the first official visit to Skopje of a Greek leader since the proclamation of the independence of Macedonia, Alexis Tsipras is accompanied by ten ministers and dozens of businessmen from the agribusiness, energy and infrastructure. The two leaders intend to prove that the economies of both countries will also benefit from this agreement, which ended a political quarrel that lasted nearly three decades,” AFP reported.

The French newspaper Le Point also described the visit as historic, while the Swiss press agency SDA focused on the two leaders’ push to demonstrated the economic benefits for both sides of ending a dispute lasting over three decades.

The German press agency DPA in a report entitled “Greece's Tsipras on historic visit to North Macedonia” also noted the popular opposition to the Prespa Agreement on both sides.
“Tsipras is the first Greek prime minister to visit the neighbouring country since Macedonia was established first as a federal Yugoslav republic in 1945, then as an independent country in 1991. He arrived less than two months after Macedonia agreed to rename itself to North Macedonia on February 12, ending a long-running diplomatic row,” the report stated.

The Washington Post also spoke of an “historic selfie” and the AP wire it used noted that Tsipras is accompanied by 10 ministers and business leaders and that the two sides signed trade and defence agreements.

TANEA Team 2 Απριλίου 2019 | 17:26
Share
Δείτε επίσης
Περισσότερα άρθρα για Αγγλική έκδοση
The alternate interior minister said problems with COVID-19 self-tests will be resolved by the end of May Government poised to abolish mandatory SMD to leave home, working to solve self-test problems
If Syriza believes it can garner political gains with daily political transformations it is sorely mistaken Editorial: Political vertigo
Santander Consumer Finance begins activities in Greece
Evangelos Marinakis: Post-Covid Shipping and the Environment – Green Energy Investments
The US ambassador says Biden has “opened up a new vocabulary of cooperation” with Greece Pyatt see deeper US-Greece strategic ties under Biden administration
The case will be re-tried in the framework now set by the Council of State Bombshell Council of State ruling accepts state’s vaccine side-effect liability
May Day should be honoured with a single march each year Editorial: Unity
Transcending the collective crisis will require leadership and not troublemakers Editorial: Messages
After a six-month shutdown, workers in the restaurant business laid the tables Editorial: The first step
The government has repeatedly said that the existing framework is outdated Battle royal looms over government bill overhauling labour relations, limiting strike action
The labour trade union movement is an invaluable and irreplaceable weapon of workers An urgent need for the rebirth of the trade union movement
Editorial: The pendulum of American politics
The thirty-somethings rushed to be vaccinated for the sake of their families and their friends Editorial: Front-and-centre
The parliamentary vote on approval of the plan’s implementation is expected before Easter Editorial: Liquidity
Turkey is keenly aware of the fact that there is a new player on the geopolitical chessboard Editorial: A just act