Greece, Turkey declare their satisfaction with results of NATO summit

Erdogan clearly indicated that he got what he wanted from the deal regarding Sweden and Finland, and that declared he would leave the summit with his 'hands full'. 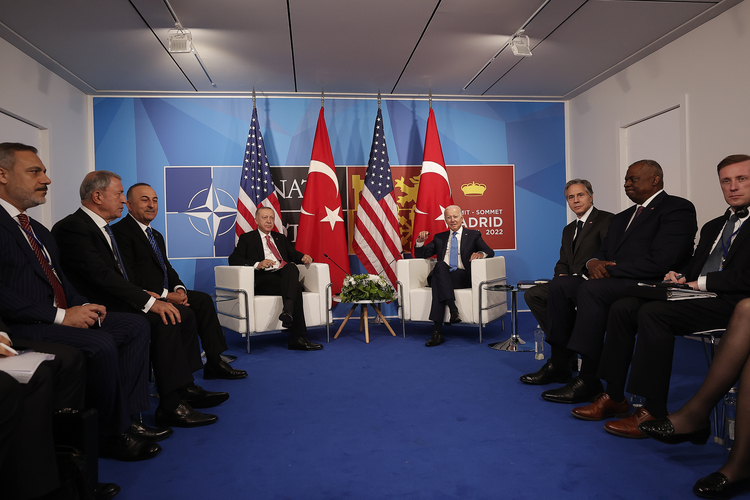 Athens sees the agreement reached during talks between Turkey, Sweden, Finland, and NATO Secretary General Jens Stoltenberg to ply ahead with NATO membership for the two Nordic states as a development that will strengthen NATO in Europe, without any concessions that might affect Greek interests, according to Greek government sources.

The essential objective for Athens during the period of Turkey’s bargaining with NATO and the US was to make sure that no concessions be made by the Alliance or the US that would in any way harm Greek interests or give credence to Turkey’s territorial claims against Greece as a quid pro quo for Turkey lifting its threatened veto of the admission of the two Nordic countries.

A telephone call between US President Joe Biden and Turkish President Recep Tayyip Erdogan on 28 June, ahead of the summit, appears to have paved the way for the shift in Ankara’s stance.

Washington was keen on making it clear that it took Turkey’s stated concerns on Sweden and Finland’s alleged softness on groups like the PKK and its Syrian offshoots and on not making it appear that quid pro quos were involved in Ankara’s shift.

“President Biden noted he looks forward to seeing President Erdogan at the NATO Summit in Madrid where leaders will discuss the consequences of Russia’s invasion of Ukraine for Transatlantic security and other threats to the Alliance such as terrorism, as well as take historic decisions to strengthen the Alliance’s collective defense and security,” the White House readout of the call stated.

The push toward NATO expansion has played a key role in a process of breaking the ice between Washington and Ankara, whose refusal to give up its Russian S-400 missile systems has until now led US-Turkey relations to their lowest point ever.

Biden, Erdogan lavish praise on each other

Erdogan has yet to be invited to the White House for talks with the US President, yet the two leaders’ remarks before a bilateral meeting yesterday, after the Turkish president lifted his objections to the NATO expansion, made clear that the two sides are in the process of seeking a swift rapprochement.

“I want to particularly thank you for what you did putting together the situation with regard to Finland and Sweden, and all the incredible work you’re doing to try to get the grain out of Ukraine and Russia. I mean, you’re doing a great job.”

Erdogan could not hide his joy over breaking the ice with the US thanks to his about-face on the issue of inviting Sweden and Finland to join the alliance (after they agreed to change their counter-terrorism legislation and lift an arms embargo on Turkey), and he lavished praise on Biden, who appears to be shepherding him back into the fold.

The summit conclusions state that Sweden and Finland will cease offering support to the PKK and its Syrian branches, and to the movement of Fetullah Gulen, the arch-enemy of Erdogan, whom the Turkish president accuses of being behind an abortive 2016 against him.

The US has steadfastly refused to extradite Gulen to Turkey.

Turkey is the only NATO member-state that has imposed no sanctions on Russia over its invasion and ongoing war against Ukraine.

Erdogan clearly indicated that he got what he wanted from the deal regarding Sweden and Finland, and that declared he would leave the summit with his “hands full”.

He also underlined Ankara self-styled role as an honest broker in the Russia-Ukraine war, both on a plan that will permit grains exports from Ukraine's Black Sea ports and as regards Russian oil and gas exports.

“Thanks to our efforts, we believe that we will be able to go back to our countries with our hands full and with full satisfaction. And as the United States, we think your pioneering in this regard is going to be crucial in terms of strengthening NATO for the future, and it’s going to have a very positive contribution to the process between Ukraine and Russia. The Russia and Ukraine conflict and the negative developments with regards to taking out of the grain from the Ukrainian ports, as well as the developments involving oil and natural gas, require all of us to work together in order to settle the disputes once and for all,” Erdogan told Biden

US inching closer to sale of F-16s to Turkey

Though the Biden administration has maintained that it has not engaged in bargaining with Turkey in order to lift its veto of Swedish and Finnish NATO membership, and indeed that Turkey did not put on the table its fervent desire to acquire 40 F-16 fighter planes and to upgrade dozens more (though Erdogan had publicly said he would do so ahead of the meeting) a top US Defense Department official quoted by the New York Times suggested that Washington is gearing up for proceeding with the sale:

“Strong Turkish defense capabilities contribute to strong NATO defense capabilities,” said Celeste Wallander, an assistant secretary of defense. “The U.S. Department of Defense fully supports Turkey’s modernization plans for its F-16 fleet.”
She added that efforts to help Turkey acquire the advanced planes “need to be worked through our contracting processes,” but she said that the United States “supports Turkey’s modernization of its fighter fleet, because that is a contribution to NATO security, and therefore American security.”

Prime Minister Kyriakos Mitsotakis, in a 17 May speech to a Joint Session of the US Congress, had urged that Congress not approve arms sales to Turkey.

TANEA Team 29 Ιουνίου 2022 | 22:34
Share
Δείτε επίσης
Περισσότερα άρθρα για Αγγλική έκδοση
The European Commission requested information on the use of Predator spyware in Greece ADAE: An electronic archive will record all surveillance, as major rule of law issues arise
Foreign media have even compared the government with Greece’s seven-year military junta Editorial: A necessary cleanup
Citizens have demonstrated they need of state support Editorial: The need for a steady social benefits policy
In the first phase of the pandemic the correct decisions were taken Editorial: Vigilance needed in dealing with Covid-19
Greek side is obliged to be, as it is, in a constant state of readiness Editorial: Composure
In the long term, liberal democracy is “condemned” to win Editorial: A serious mistake
The PM stressed that the tapping was legal Mitsotakis denies prior knowledge of phone tapping of Androulakis, pledges reform, tight oversight of EYP
Resignations are not enough, nor would a cabinet reshuffle or snap election suffice Editorial: Transparency now!
Citizens seek persuasive solutions to the problems of daily life Editorial: Restoring trust in political parties
Last year in Greece there were 17 femicides Editorial: An urgent wake-up call
Stavros Psycharis never allowed himself to become subjugated. He never censored. Editorial: The death of a journalist
Psycharis He began his long career at the Lambrakis Press in 1972 Renowned journalist, publisher, entrepreneur Stavros Psycharis has died age 77
It is inconceivable for the average citizen to be defenceless amidst major economic trials Editorial: A model programme
Greece now has experience and an enhanced plan of deterrence Editorial Ta Nea: Maintaining composure
'I truly feel that the future of humanity is dark' God at Ground Zero: How a Mount Athos monk fit 9/11 into Byzantine iconography