Just a few days ago, a photograph with a funeral announcement for the rector of the University of Thessaloniki made the rounds on the internet. 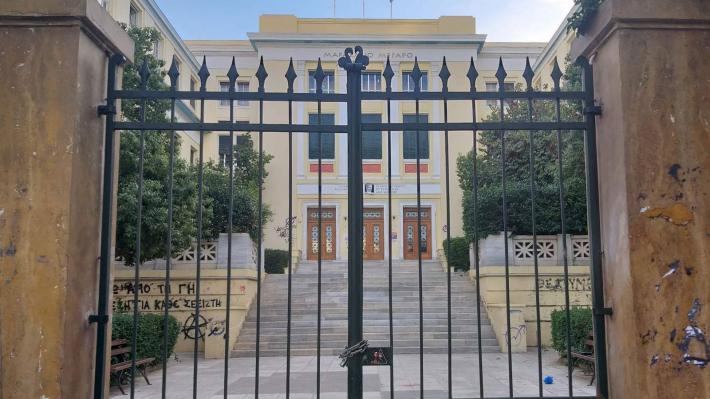 There is a principle that should have been self-evident at the start of 2022.

Nobody for whatever reason has the right to beat a professor in class in front of his students, or anywhere else for that matter.

Yesterday’s incident at the Athens University of Economics and Business, in which a professor was attacked by a group of hooded thugs, is yet another black page of violence for Greek universities, which have been bedeviled by similar incidents in the past.

What happened yesterday is not an exception to the rule. It is a routine, well-established situation that casts a dark shadow on the reputation of our universities abroad.

Despite efforts exerted until now, violence and bullying continues. Just a few days ago, a photograph with a funeral announcement for the rector of the University of Thessaloniki made the rounds on the internet.

At a time that the academic community must handle the repercussions of the pandemic, tolerance for any type of violence leads ineluctably to a further downgrading of our universities.

Thuggery, terrorism, and those who believe they can mete out justice with their fists, harm democracy.

We must reiterate the self-evident unreservedly.

Yesterday’s incident at the Athens University of Economics and Business is a wakeup call regarding a situation that cannot continue indefinitely.

The condemnation of the attack without reservations by parliamentary parties indicates that even belatedly they have understood the dangers, for universities and for the state and its institutions, of tolerating such a situation.

The related education law passed by the current government is a step toward ensuring the smooth operation of universities, but much more needs to be done for the bureaucracy to act rapidly and effectively.

Hooded thugs, wherever they may come from and whatever their aim, cannot be allowed to pose a threat to university students and professors, spreading fear at universities.

Enforcement of the current law and punishment of the culprits is the only way to respond to violence at universities.

This is necessary and should be done swiftly and decisively.

The sooner the better.

TANEA Team 12 Ιανουαρίου 2022 | 15:22
Share
Δείτε επίσης
Περισσότερα άρθρα για Αγγλική έκδοση
This young woman heard the message of other women that preceded her Editorial: Catharsis
Balances with the Russian side are very delicate and must be maintained Editorial: Composure
'Greece is a significant and wise actor in this part of Europe' Kosovo FM Donika Gervalla–Schwarz: ‘We are not begging for recognition from Greece’
People want answers, persuasive plans, and arguments Editorial: Maturation
The pandemic and citizens’ fears regarding inflation have shocked households Metron Analysis poll: SYRIZA trails New Democracy, KINAL-PASOK skyrockets
It is imperative for the weapons programme to be implemented immediately Editorial: Arrivals
The charges of the victim garnered attention nationwide Editorial: Support
Greece is a peaceful Western country Editorial: Vigilance
Both SYRIZA and PASOK are in a transitional phase Editorial: Changes
Tsipras posts on the social media and frequently as possible Editorial: Obligations
Universities have become a sort of state within the state Editorial: Enough is enough!
The shift in America’s priorities should come as no surprise Editorial: Fluidity
We have the weapons, the experience, and obviously the collective will Editorial: Transcending the pandemic
How do you negotiate with Vladimir Putin? Editorial: Dilemma
Editorial: Phenomenon