A year ago, while still a presidential candidate, Biden commemorated the 1.5 million Armenian men, women and children who lost their lives in the final years of the Ottoman Empire. 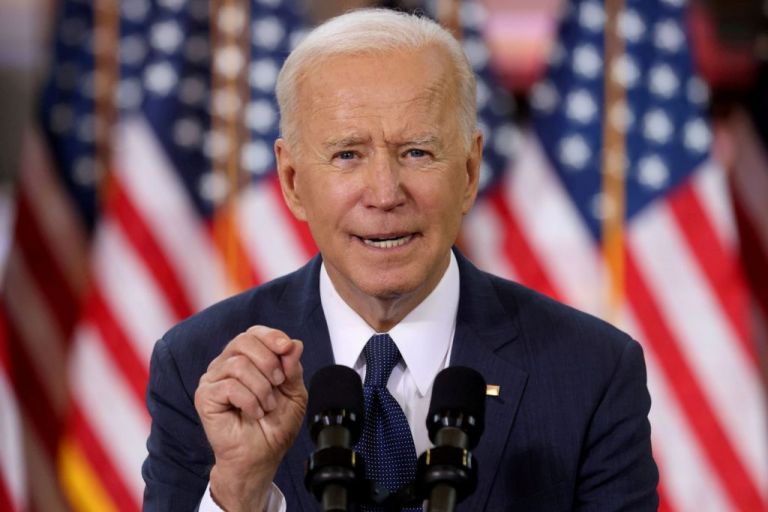 U.S. President Joe Biden on Saturday said the 1915 massacres of Armenians in the Ottoman Empire constituted genocide, a historic declaration that infuriated Turkey and is set to further strain frayed ties between the two NATO allies.

The largely symbolic move, breaking away from decades of carefully calibrated language from the White House, will likely to be celebrated by the Armenian diaspora in the United States, but comes at a time when Ankara and Washington have deep policy disagreements over a host of issues.

Turkish Foreign Minister Mevlut Cavusoglu said Turkey "entirely rejects" the U.S. decision which he said was based "solely on populism".

Biden's message was met with "great enthusiasm" by the people of Armenia and Armenians worldwide, Armenian Prime Minister Nikol Pashinyan wrote in a letter to the U.S. president.

In his statement, Biden said the American people honor "all those Armenians who perished in the genocide that began 106 years ago today."

"Over the decades Armenian immigrants have enriched the United States in countless ways, but they have never forgotten the tragic history ... We honor their story. We see that pain. We affirm the history. We do this not to cast blame but to ensure that what happened is never repeated," Biden said.

In comments that sought to soften the blow, a senior administration official told reporters that Washington encouraged Armenia and Turkey to pursue reconciliation and continues to view Ankara as a critical NATO ally.

For decades, measures recognizing the Armenian genocide stalled in the U.S. Congress and U.S. presidents have refrained from calling it that, stymied by concerns about relations with Turkey and intense lobbying by Ankara.

Turkey accepts that many Armenians living in the Ottoman Empire were killed in clashes with Ottoman forces during World War One, but contests the figures and denies the killings were systematically orchestrated and constitute a genocide.

'Relations already in a shambles'

A year ago, while still a presidential candidate, Biden commemorated the 1.5 million Armenian men, women and children who lost their lives in the final years of the Ottoman Empire and said he would back efforts to recognize those killings as a genocide.

Ties between Ankara and Washington have been strained over issues ranging from Turkey's purchase of Russian S-400 air defense systems - over which it was the target of U.S. sanctions - to policy differences in Syria, human rights and a court case targeting Turkey's majority state-owned Halkbank.

Biden's declaration follows a non-binding resolution by the U.S. Senate adopted unanimously in 2019 recognizing the killings as genocide.

"With relations already in shambles, there was nothing to stop Biden from following through," said Danforth. "Ankara has no allies left in the US government to lobby against this and Washington isn't worried whether it angers Turkey anymore."

Erdogan had established a close bond with former U.S. president Donald Trump, but since Biden took over, Washington has grown more vocal about Turkey's human rights track record. It has also stood firm on its demand that Ankara get rid of the Russian defense systems.

Biden had also delayed having a telephone conversation with Erdogan until Friday -- seen largely as a cold shoulder to the Turkish president -- when he informed him of his decision to recognize the massacres as genocide.

Saturday's announcement was slammed by the Turkish government and several opposition politicians. Turkey's presidential spokesman Ibrahim Kalin said Biden's remarks "only repeat the accusations of those whose sole agenda is enmity towards our country."

U.S. President Joe Biden said on Saturday that the 1915 massacres and forced deportation of Armenians in the Ottoman Empire constituted genocide, a move that infuriated Turkey and further strained frayed ties between the two NATO allies.

Here is some background to the issue:
What happened in 1915?

Repression by Ottoman irregulars, mainly Kurds, led to the massacre of tens of thousands of Armenians in 1894-1896 in eastern Anatolia, now eastern Turkey. Several thousand more were killed in Constantinople, now Istanbul, in August 1896 after Armenian militants seized the Ottoman Bank.
As the Ottomans fought Russian forces in eastern Anatolia in World War One, many Armenians formed partisan groups to assist the invading Russian armies.

On April 24, 1915, the Ottoman Empire arrested and ultimately killed hundreds of the Armenians.

In May 1915, Ottoman commanders began mass deportation of Armenians from eastern Anatolia. Thousands were marched south towards Syria and Mesopotamia. Armenians say some 1.5 million died in massacres or of starvation and exhaustion in the desert.

What does Turkey say?

The Turkish republic, established in 1923 after the Ottoman empire collapsed, has always denied there was a systematic campaign to annihilate Armenians.

It says that thousands of Turks and Armenians died in inter-ethnic violence as the empire started to fall apart and fought a Russian invasion of its eastern provinces during World War One.

How are Turkish-Armenian relations now?

Seeking to bury a century of hostility, the two countries signed a peace accord in 2009 which called for the creation of a commission of international experts to study the 1915 killings, which Armenia insisted should be declared a genocide.

They agreed to establish diplomatic ties and open their border, subject to parliamentary approval of the deal. But Yerevan and Ankara accused each other of trying to re-write the texts, and within six months the ratification was suspended.

Armenia formally scrapped the deal in 2018.

Last year, Turkey strongly supported Azerbaijan in its six-week conflict with Armenia over the enclave of Nagorno-Karabakh, when Azeri forces recaptured territory from Armenian troops.

What do other countries say?

The 1915 killings have been recognised as genocide in dozens of countries.

French President Emmanuel Macron and Italy's lower house of parliament officially declared in 2019 that the events constituted genocide. Macron decreed that April 24 should be a day of annual commemoration.

TANEA Team 24 Απριλίου 2021 | 22:04
Share
Δείτε επίσης
Περισσότερα άρθρα για Αγγλική έκδοση
Pappas' case concerns how institutions were exploited during Syriza’s rule, between 2015 and 2019 Editorial: Duty
Editorial: Barbarity
In times of tensions military service is viewed as a national duty Editorial: Incentives for early military service
An emotional start in taking a position on developments in the region would be catastrophic Editorial: A measured response to Israeli-Palestinian conflict
The alternate interior minister said problems with COVID-19 self-tests will be resolved by the end of May Government poised to abolish mandatory SMD to leave home, working to solve self-test problems
If Syriza believes it can garner political gains with daily political transformations it is sorely mistaken Editorial: Political vertigo
Santander Consumer Finance begins activities in Greece
Evangelos Marinakis: Post-Covid Shipping and the Environment – Green Energy Investments
The US ambassador says Biden has “opened up a new vocabulary of cooperation” with Greece Pyatt see deeper US-Greece strategic ties under Biden administration
The case will be re-tried in the framework now set by the Council of State Bombshell Council of State ruling accepts state’s vaccine side-effect liability
May Day should be honoured with a single march each year Editorial: Unity
Transcending the collective crisis will require leadership and not troublemakers Editorial: Messages
After a six-month shutdown, workers in the restaurant business laid the tables Editorial: The first step
The government has repeatedly said that the existing framework is outdated Battle royal looms over government bill overhauling labour relations, limiting strike action
The labour trade union movement is an invaluable and irreplaceable weapon of workers An urgent need for the rebirth of the trade union movement