Mitsotakis says he seeks proactive growth initiatives with labour on board

"The state will support entrepreneurship with every possible incentive for growth but it also demands that business will fulfil its proper social role,” the PM said. 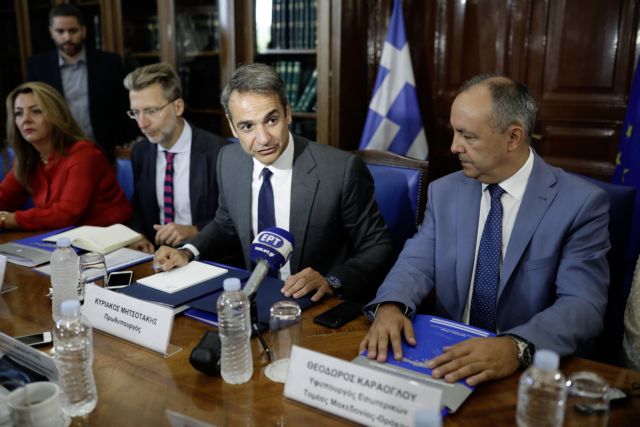 Prime Minister Kyriakos Mitsotakis sought the establishment of a new social contract between entrepreneurs, labour, and the state at a meeting today with Greece’s largest business and labour organisations.

It was a full court house.

"We already have some very good news on many fronts: The huge Elliniko development project, the submission of a new COSCO master plan for a real upgrade of the Port of Piraeus, and developments at the Skaramangas shipyards," Mitsotakis said.

The PM essentially repeated his remark to the BBC that his government is pursuing an “aggressive growth plan” which he will unveil for public consultation by the end of the week.

"The state will support entrepreneurship with every possible incentive for growth but it also demands that business will fulfil its proper social role,” the PM said.

In particular he stressed that business must strictly abide by labour and environmental law.

"This is the truth pact that I spoke of many times, when I was still opposition leader, and which I now call on you to put into action," he declared.

Μωρό γεννήθηκε με… νεύρα – Το «απειλητικό» βλέμμα στο γιατρό
TANEA Team 2 Σεπτεμβρίου 2019 | 21:54
Δείτε επίσης
Περισσότερα άρθρα για Αγγλική έκδοση
Editorial: Pillar
Editorial: Crisis
Government and opposition are skirmishing over the rubble in Mati Editorial: Duty
As it turned out Mega was too big to die Editorial: The return of Mega Channel
The government cannot address the problem of school violence on its own Editorial: Wave of violence
Job creation is the overarching aim so that society can prosper Editorial: Automatic pilot
Right now there must be delicate diplomatic manoeuvres abroad and a solid front domestically Editorial: Consensus
Editorial: Delusions
Editorial: Readiness
It seems that freedom of speech cannot be taken for granted in our country Editorial: Fascism
At last it seems that reason is prevailing over belief and superstition about vaccines Editorial: Sirens
Dialogue must continue to be a basic pillar of Greek foreign policy Editorial: Dialogue
SYRIZA links Oruc Reis incident to Turkey's disputation of Greek sovereignty over Aegean islets
The state is obliged to determine which groups are serving humanistic ideals and which are simply exploiting human misery Editorial: Investigation
Electronic prescriptions a much-needed push toward digital modernisation