Mike Pompeo: ‘I am concerned about a long-term structural shortage of energy resources’

The former US Secretary of State says Erdogan’s tactics ‘do not befit good neighbourly relations between two NATO member states’, only way to confront Putin ‘adequate show of force’. 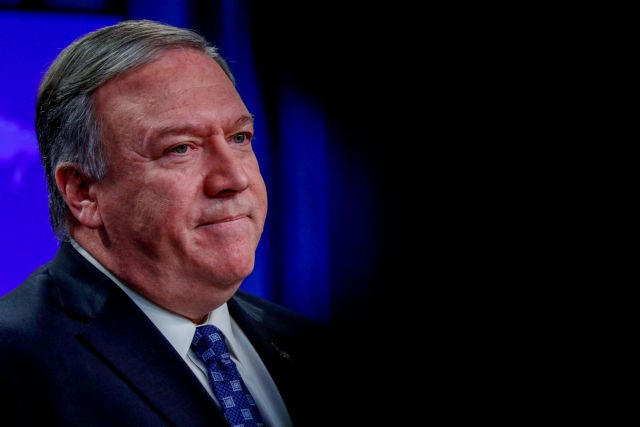 Former US Secretary of State and ex-CIA chief Mike Pompeo, in an exclusive interview with the Sunday To Vima during his visit to Athens for an Economist Conference, expresses his concerns about the prospect of a long-term, structural energy crisis.

Pompeo criticises Turkish President Recep Tayyip Erdogan and underlines that he sees no indication of a change in his stance toward Greece.

Convinced that the November US mid-term elections will bring about a political change, he leaves open the prospect of running for president in 2024.

I would like to begin by you offering us your take on the results of the recent NATO summit.

I think it was useful in the sense that it allowed NATO to begin restructuring in light of a battle that apparently will be prolonged. To be honest, this conflict began long before last February. NATO did not do as much as it should have and Vladimir Putin sensed that and made his move. We lost the opportunity to deter him. Consequently, Secretary General Jens Stoltenberg and NATO leaders had an opportunity to regroup, assess the situation, and see how to end the war. Everyone wants this conflict to end, and by that I mean everyone in the West, because I don’t think that is what Putin wants.

How do you assess NATO’s rapprochement with Turkey? Do you believe that President Erdogan is once again a trustworthy ally (if one assumes that he ever was)? We saw that when he returned to Ankara after the summit hentinued his hostile rhetoric against Greece.

I was both not surprised and glad that President Erdogan withdrew his objections to the accession of two new NATO members. It is very important and I am happy about that, just as I am happy about the role that many member-states played in order to allow that.

Regarding President Erdogan, in my four years as Secretary of State he was a very difficult counterpart. At times he did not do the things that we thought made sense, not for America but for the entire Alliance and Turkey itself.

It was a very complex and difficult relationship. That includes the domestic political clash in Turkey and issues of religious freedom, like the case of Pastor Branson fo example. It was a difficult period. I have no indication that Erdogan has changed in that sense. The interests remain the same. The recent kerfuffle he is making by wanting to label these beautiful waters Turkaegean (Turkey’s tourism advertising campaign) indicate that he will continue with his demands.

Our position was always stable. There may be border disputes, and that happens with many countries. Yet, there are ways to resolve them, and they do not include sending warships, violations, and presenting “crazy” maps.

This way is not constructive. From what I can see, President Erdogan wants to continue this tactic, which does not befit good neighbourly relations between two NATO members which share the same geographic area. This is not the way to behave.

What is Greece’s role in the Alliance today?

Greece has always been an important partner for us, not only because of American and NATO facilities that are here, but because of our common understanding. Prime Minister Mitsotakis and our teams have a common view of the world. If there is a difference, you resolve it. There is a mechanism and a model of action. Moreover, you were always prepared to do what is right for NATO’s “team”. We have signed military cooperation agreements that are very important for all NATO member-states, and that certainly includes the US and Greece.

How do you think the war in Ukraine can end? How do you evaluate Henry Kissinger’s recent urging for a compromise in order to avert the creation of a Sino-Russian axis?

Dr. Kissinger is half right and half wrong. He rightly said that an expanded cooperation between Russia and China is a source of grave concern for global stability and very dangerous. It should be made clear to the Russian people that it is not in their interest to attach themselves to the chariot of Xi Jinping. He (Kissinger) is wrong, however, when he overlooks that Vladimir Putin is not at all interested in entering some kind of negotiations or making concessions. That is how he has behaved throughout his adult life, and certainly since he became the leader of Russia. He believes that Europe, or a large part of it, is Russia, as Kansas is a US state. I know very well – and I don’t have to look at any map – that he believes that. Consequently, there is no reason for one to believe that even if there were a ceasefire tomorrow that that would limit his ambition of putting a large part of Europe under his political control, and I think that Dr. Kissinger is wrong on that point.

Why is he proposing that?

He believes that there can be a compromise, that if you give Putin a piece of real estate the job will be done. I do not believe that. It is my firm conviction that as long as Vladimir Putin and those who believe in Russian expansionism as much as he does continue to control the mechanisms of power in Russia, most likely we will continue to observe this conflict. The only way to handle it in order to achieve what we all want, including Dr. Kissinger and myself, is a sufficient show of force. That is the only thing that Vladimir Putin may potentially understand. If we do not do it, and if we continue to be slow, and continue speaking publicly about all that we are not prepared to do and express fears of escalation, then we will most likely see an escalation. This may sound counterintuitive to some, but this has been demonstrated in the over 100 days of the war in Ukraine.

From that vantage point, are you concerned about a possible destabilisation of Europe, and Germany in particular, due to the energy crisis?

Today we are watching the results of bad choices for decades in energy policy. I am afraid that we will confront structural issues in energy markets, as a result of political choices, which will not be limited to this coming winter. When you cannot invest in new refineries due to ESG (Environmental Social Governance) regulations, because such huge fines are imposed on banks for investing in fοssil fuels anywhere in the world, and certainly in the US, and when you say I will build a new Russian pipeline and shut down my nuclear plants and live on solar energy and windmills, your geostrategic position is at a disadvantage.

We see how this is being exploited today not only by Russia, but also by Iran and Venezuela and all the “bad actors” who provide their resources anywhere in the world. I am deeply worried due to older decisions that now seem irreversible, such as the construction of pipelines, terminals, and transportation networks – and more generally long-term plans with high capital intensity, which are not welcomed by markets and many governments. For these reasons, I consider it likely that we will have a long-term, structural energy resources shortage crisis that will hit every family, whether in Greece or Ohio.

What are you expecting from the US mid-term elections in November? Do you believe they will bring changes in American politics with international repercussions? How do you view the prospects for the Republican Party?

I’ve been working for a long time in the run-up to these elections. I participate in campaigns of Republican candidates who share my views about America and the image we should have in the world. I believe we will see Americans’ reaction to what they are experiencing in their daily lives. There is a baby formula shortage and car fuel is extremely expensive. Over the summer people in Phoenix and Florida will cool their homes with electricity and in the winter they will warm them in Wisconsin and Maine, and they will find that they can’t make ends meet and that household budgets have collapsed. I think the vote in November will send the message, “We won’t suffer that anymore.” It is not a partisan issue – it is political and deeply American.

Hence, I believe we will see the majority of Americans rising up, and that will be important for the rest of the world. The elections, however, involve certain governors, senators, and representatives. They are not presidential elections, which would have a broader global impact. Yet, I think they will remind every American politician from both parties that the most important issues are those that produce positive results and stability for American families and the country. I believe that many Republicans will win and in that sense it is possible you will see a shift in American politics, so that the importance of economic growth will be understood. President Biden will still be in charge, so we will not immediately see the full impact of the electoral results. However, they will shape an environment for the presidential elections in two years, in a manner that will reflect a return to an America that is strong domestically so that it can be an great partner internationally.

It is impossible for me to know. I am now working on ’22 mid-term election campaigns and at some point early next year I will turn my attention to the things I have been involved with over the past decades. I might submit myself to the judgment of the American people as a presidential candidate, and maybe not. I will continue, however, to work on all the things that are important to the American people, so ask me the same question in six or seven months. Then I will have a definitive answer.

I hope to have the opportunity!

TANEA Team 11 Ιουλίου 2022 | 17:23
Share
Περισσότερα άρθρα για Αγγλική έκδοση
Resignations are not enough, nor would a cabinet reshuffle or snap election suffice Editorial: Transparency now!
Citizens seek persuasive solutions to the problems of daily life Editorial: Restoring trust in political parties
Last year in Greece there were 17 femicides Editorial: An urgent wake-up call
Stavros Psycharis never allowed himself to become subjugated. He never censored. Editorial: The death of a journalist
Psycharis He began his long career at the Lambrakis Press in 1972 Renowned journalist, publisher, entrepreneur Stavros Psycharis has died age 77
It is inconceivable for the average citizen to be defenceless amidst major economic trials Editorial: A model programme
Greece now has experience and an enhanced plan of deterrence Editorial Ta Nea: Maintaining composure
'I truly feel that the future of humanity is dark' God at Ground Zero: How a Mount Athos monk fit 9/11 into Byzantine iconography
Hatzidimitriou shattered the stereotype that women are not good at maths Editorial: Worthy role Models
A great reform was necessary but seemed unfeasible0 Editorial: Modernisation of the state
Editorial: The need for an in-depth investigation
Justice delayed is justice denied Editorial: Swift justice
A revival of populism is exploiting the natural anxieties of citizens Editorial: President Katerina Sakellaropoulou's message
Editorial: Mandatory reforestation after the wildfires
The EU is already facing adverse conditions due to the war in Ukraine Editorial: The major crisis the EU faces and the great leap forward