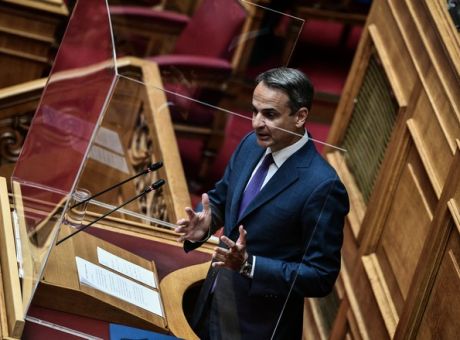 Prime Minister Kyriakos Mitsotakis in a parliamentary debate today on the recent disastrous wildfires defended the government’s management of the crisis, and he blamed the magnitude of it on the extended heat wave in the Mediterranean and on climate change.

Straight on the heels of the destruction of 100,000 hectares of forest land, in a calm and low-key speech, Mitsotakis stressed the need for a basic inter-party consensus in designing the restructuring of civil protection in the country.

“Thousands of human lives were saved, and human life is our paramount concern,” he declared

Mitsotakis blamed climate change for the extent and intensity of the recent wildfires.

“It turned all our forests into tinder boxes,” he said.

Mitsotakis said that the 112 emergency civil protection hotline saved lives and boasted that large and powerful countries such as Germany, France and the UK do not have such a hotline.

“The culture of evacuations is a legacy of these wildfires,”

He also maintained that there were more fire planes this year than ever and that the government plans to buy new fire planes and rent more.

The PM also thanked the fire fighters from other EU countries who played a crucial role in containing the fires.
These include Romanian fire fighters and also Polish fire fighters, who are credited with saving the community of Vilia, Attica.

The PM underlined the fact that he issued a public apology for the extent of the wildfires, which he described as a “personal moral and political act”. He did not specify which particular errors and omissions, and main opposition SYRIZA leader lambasted the PM for that.

“What exactly did you apologise for?” Alexis Tsipras asked repeatedly.

The PM said that 10mn euros in aid to the fire-stricken has already been disbursed. “The state has never moved more swiftly,” he declared.

He also announced that there is a plan for anti-flooding works everywhere, and that the project is already underway in Evia.

The PM said there will be a new platform where private and corporate donors will be able to donate for reconstruction and donors will know where their money is going.

As far as managing the climate crisis is concerned, Mitsotakis said, “We must change everything –forest protection, energy production, and the way we move”. He said billions in EU funding will be earmarked for this.

The PM concluded his speech with a quote from the great French author Victor Hugo:

TANEA Team 25 Αυγούστου 2021 | 13:02
Share
Περισσότερα άρθρα για Αγγλική έκδοση
Unrepentant, Tsipras unleashed charges against the government and announced handouts Editorial: A return to the past
The country is in great need of stability., not electoral surprises Editorial: Normalcy
The EU’s adjustment of financial rules has facilitated the situation Editorial: Lessons
Editorial: The conundrum of early elections
It is common knowledge that all political parties seek the vote of Greece’s youth Editorial: Greece’s youth
In a democracy, elections cannot serve as a weapon for prime ministers Editorial: The need for electoral stability
Mitsotakis rules out any prospect of political consensus with SYRIZA
Merkel’s statement should lead us collectively to a rethinking of what happened and not reflexive indignation Editorial: The price of imprudent politics
Self-tests, contact tracing key to safe re-opening of schools Spike in COVID-19 cases expected after schools open next week
The repercussions of these illegal actions are not limited to public health Editorial: A threat to society
September has arrived, but the University Protection Groups did not keep the rendezvous Editorial: Rendezvous
Theodorakis exemplified the sacred and mystical marriage of music and poetry The Greek nation bids farewell to beloved composer Mikis Theodorakis
One must be very careful in making choices that will influence the education of future generations Editorial: The time has come for a bold ‘yes’
Hellenic Statistical Service Staikouras for GDP – Strong recovery confirmed
Destroying a minority: Turkey's September 6-7, 1955 pogrom against the Greeks of Istanbul