The Belarus regime and its collaborators should be subjected to extremely heavy sanctions for the state aeroplane hijacking that they carried out. 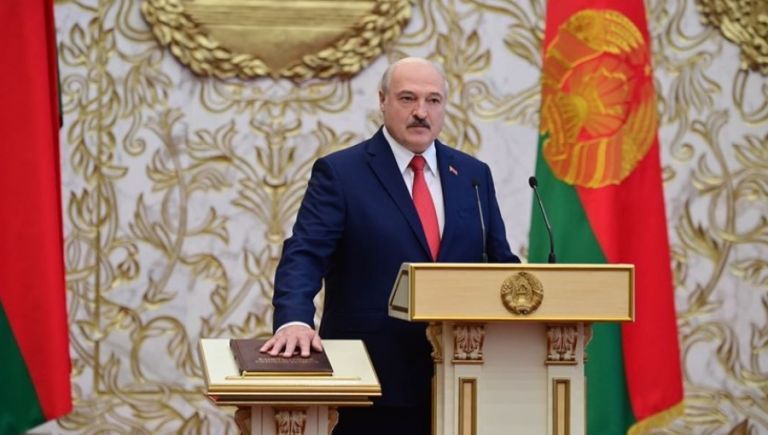 In our age, references to international law seem cliché or even something of a joke. British Prime Minister Boris Johnson forbade government cadres from speaking about an “international rules-based system”.

The fact that international law is violated systematically, provocatively, and without punishment – take for example the Turkish occupation of northern Cyprus, the annexation of Crimea, and the occupation of the Left Bank – does not mean that we should abandon the battle to defend it.

This is all the more true when violations of international law by some leaders are so blunt that they encourage other aspiring imitators.

If the dictator of Belarus can force an aeroplane to land on his country’s territory in order to arrest a dissenter then what is to keep the leaders of Iran, China, and Russia in the future from doing the same – or even from capturing “annoying” citizens from third countries?

Freedom House’s most recent annual report says those three countries – along with Turkey, Rwanda, and Saudi Arabia – are involved in inter-state coercion.

It is for that reason – and not a general “defence of human rights” - that the Belarus regime and its collaborators should be subjected to extremely heavy sanctions for the state aeroplane hijacking that they carried out.

Democracy has red lines and they should at long last defend them.

TANEA Team 25 Μαΐου 2021 | 20:44
Share
Δείτε επίσης
Περισσότερα άρθρα για Αγγλική έκδοση
There is a danger of the war being viewed as something normal Editorial: Taking measures
Athens' objective was to avert concessions that might affect Greek interests Greece, Turkey declare their satisfaction with results of NATO summit
What is at stake is the strategic depth of the Alliance Editorial: A crucial NATO summit
European supervised drug consumption sites have been an inextricable part of drug treatment Editorial: The first step
The overturning of Roe v. Wade turns the clock back 50 years for American women. Editorial: Back and forth
Thymios' statement - “I no longer trust people.” – is a punch in the gut. Editorial: A punch in the gut
Editorial: Audits of politicians' wealth
Mario Draghi has a prominent position in the EU architecture Editorial: Alliance
After a certain point, the necessary caution is a matter of personal responsibility Editorial: COVID-19 and personal responsibility
Extremists still constitute a threat Editorial: Threat
A consciously responsible stance is needed Editorial: Maintaining COVID-19 alertness
The late PM Constantine Karamanlis famously said, 'We belong to the West' Editorial: Contradictions
The end of EU enhanced fiscal supervision signals the exit from the tunnel Editorial: Breakthroughs
Head of Greek Pomaks’ Association rips into Erdogan’s revisionist expansionism
All Greek governments since Andreas Papandreou's demanded the return of the Marbles Osborne: ‘Deal to be done’ on sharing Parthenon Marbles