The residents of the Aegean islands that are the point of entry for most migrants are also relieved because those residing in Reception and Identification Centres has fallen by 62 percent. 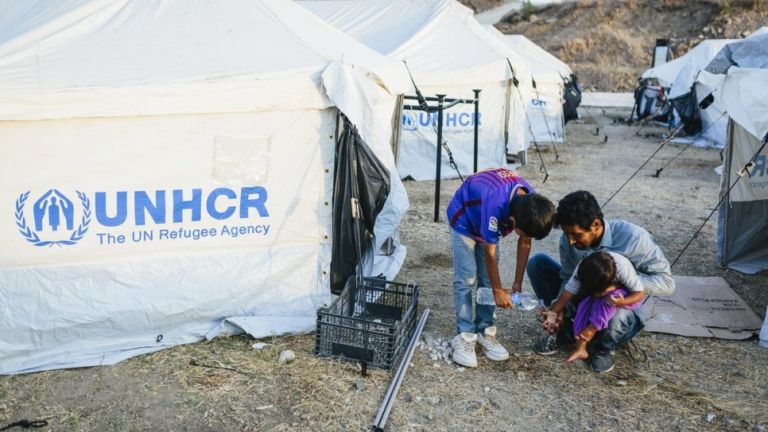 The Greek government appears to be pleased because the number of refugees and migrants residing in reception facilities has fallen by 25 percent since the beginning of the year.

Moreover, the number of new arrivals from Greece's eastern borders has decreased by 78 percent compared to last year.

The residents of the Aegean islands that are the point of entry for most migrants are also relieved because those residing in Reception and Identification Centres has fallen by 62 percent.

Naturally these numbers do not signal a resolition of the refugee issue.

As the UN High Commissioner for Refugees wrote in a piece published by Ta Nea today the total number of asylum seekers and displaced people has reached one percent of the global population.

This is not the result of natural diasters but is rather due to the fact that, "A world that has sworn to love in peace has proven itself to be very good and starting battles but not so capable of resolving them."

Of course solutions exisτ, but they will not be found by burying one's head in the sand, in push-backs, or in shifting responsibility.

It requires the cooperation of political leaders in order to address the causes that lead people to abandon their countries.

"Leave me jobless!" is the heart-wrenching plea of the UN High Commissioner for Refugees on the occasion of its 70th anniversary. It is pointless to remember refugees only when we see a picture or on an anniversary.

We must work to create a world in which no human being is forced to leave his or her home.

Until then we must remember that seeking asylum is not a lawless act.

It is a right.

TANEA Team 14 Δεκεμβρίου 2020 | 22:31
Share
Δείτε επίσης
Περισσότερα άρθρα για Αγγλική έκδοση
People want answers, persuasive plans, and arguments Editorial: Maturation
The pandemic and citizens’ fears regarding inflation have shocked households Metron Analysis poll: SYRIZA trails New Democracy, KINAL-PASOK skyrockets
It is imperative for the weapons programme to be implemented immediately Editorial: Arrivals
The charges of the victim garnered attention nationwide Editorial: Support
Greece is a peaceful Western country Editorial: Vigilance
Both SYRIZA and PASOK are in a transitional phase Editorial: Changes
Tsipras posts on the social media and frequently as possible Editorial: Obligations
Universities have become a sort of state within the state Editorial: Enough is enough!
Nobody for whatever reason has the right to beat a professor Editorial: Zero tolerance
The shift in America’s priorities should come as no surprise Editorial: Fluidity
We have the weapons, the experience, and obviously the collective will Editorial: Transcending the pandemic
How do you negotiate with Vladimir Putin? Editorial: Dilemma
Editorial: Phenomenon
Maintaining tensions does not contribute to dialogue or good neighbourly relations Editorial: Pragmatism in Greek-Turkish relations
The alarm bell of daily life is urgently ringing Editorial: Alarm bell