In her first statement as president Sakellaropoulou spoke of 'the difficult but not unsolvable equation' of both guarding the borders and fulfilling one’s humanitarian duty defenceless and desperate people. 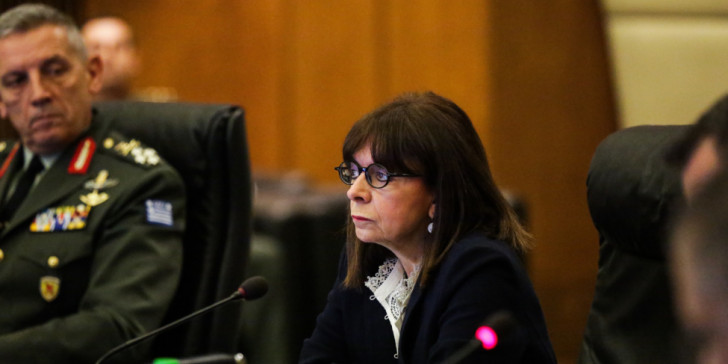 The decision of newly-inaugurated President Katerina Sakellaropoulou to pay her first official visit to the defence ministry is packed with symbolism.

In so doing she expressed her solidarity with the members of the armed forces who have been encharged by the state with the difficult task of guarding the borders under extremely conditions adverse conditions.

Moreover, her visit underlined the fact that she shares the same concerns as all Greek citizens.

The visit also constituted a message to the Turkish leadership which has exploited refugees and has used unseemly language, which undermines the mores of international relations and any sense of diplomacy, in referring to Greece.

The visit signaled the country’s decisiveness and the unity of the Greek nation and its political class.

In her first statement as president Sakellaropoulou spoke of “the difficult but not unsolvable equation” of both guarding the borders and fulfilling one’s humanitarian duty defenceless and desperate people.

This is at once a message to Greece’s European Union partners.

Her words reminded them of the values that Greece has been serving and that Europe must not cease serving.

TANEA Team 18 Μαρτίου 2020 | 22:48
Share
Δείτε επίσης
Περισσότερα άρθρα για Αγγλική έκδοση
Turkey and Greece are moving in opposite directions Editorial: Turkey's dangerous games
The Ukrainians are fighting on home turf and have very high morale Dinner with Zelensky: the character of a Ukrainian hero
The PM is also mulling a substantial cabinet reshuffle Mitsotakis no longer rules out early elections, possible autumn dates floated
Editorial: A scourge at our schools
When time is of the essence, the government has a duty to act Editorial: It is high time for reforms
Mitsotakis underlined Greece’s crucial geostrategic position PM Kyriakos Mitsotakis’ historic speech to Joint Session of US Congress (full text)
A party without self-criticism and renewal cannot move forward Editorial: Political parties transforming
Greece’s role as an energy hub must be emphasised Editorial: Opportunities
Mitsotakis-Biden talks: Greek-Turkish relations, the war in Ukraine, wayward Turkey’s new role in NATO
It is not in Greece’s interest for Turkey to be isolated or humiliated Editorial: Opportunity
The Marshall Plan prioritised rebuilding export capacity How should a Marshall Plan for Ukraine work?
Drop in COVID-19 deaths - number of infections, intubated patients stable, hospital admissions rise
Policing of universities is an unpleasant but necessary measure Editorial: No excuse
A strict price inspections policy is needed to curb untrammelled price hikes Editorial: Dealing with inflation
Editorial: Axes