'Indeed, these are extraordinary circumstances. And we have just been to the border area and have seen how tense and how difficult the situation is. The Greek authorities are facing a very difficult task in containing the situation.,' said European Commission President Ursula von der Leyen. 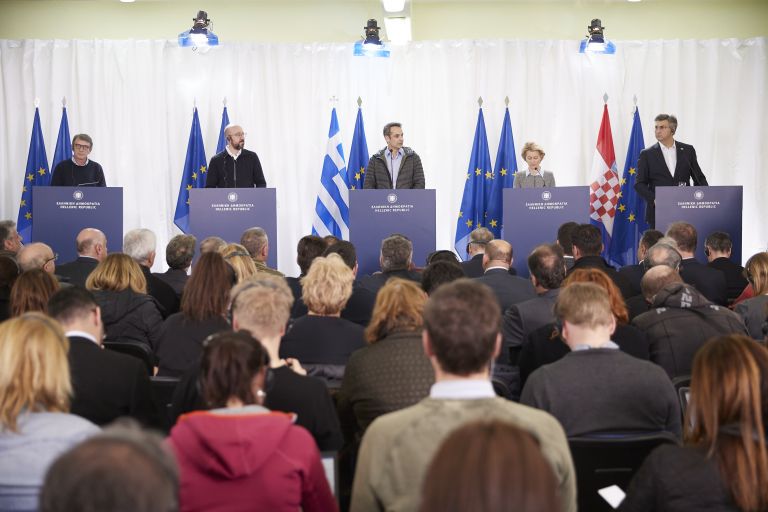 European Commission President Ursula von der Leyden announced that Greece will receive an additional 700mn euro in EU aid in order to confront the mounting migrant and refugee crisis at its eastern land and sea borders.

In line with Greece’s longstanding declarations of the self-evident, that Greece’s borders are the EU’s, Von der Leyen underlined that the situation at the EU’s borders is not an exclusively Greek affair and that it is Europe’s responsibility to address the situation in an orderly manner with unity, responsibility, and decisiveness.

“Indeed, these are extraordinary circumstances. And we have just been to the border area and have seen how tense and how difficult the situation is. The Greek authorities are facing a very difficult task in containing the situation. And I want to thank the Greek border guards and the coast guards, I want to thank the civilians, the police, the servicemen and servicewomen, and I want to thank Frontex for their tireless effort. It is important to me to be here today with you and to tell you that the Greek worries are our worries,” the European Commission president declared at a joint press conference in the Evros border region,” said Ursula von der Leyen.

Migrants 'lured through false promises' from Turkey to go to Greece

“This border is not only a Greek border but it is also a European border. And I stand here today as a European at your side. I also want to express my compassion for the migrants that have been lured through false promises into this desperate situation. We have come here today to send a very clear statement of European solidarity and support to Greece. Our first priority is making sure that order is maintained at the Greek external border, which is also a European border. I am fully committed to mobilising all the necessary operational support to the Greek authorities,” she said regarding operational support.”

“Following Greece's request, Frontex is now getting ready to deploy a Rapid Border Intervention Team. Frontex is preparing the deployment of one offshore patrol vessel and six coastal patrol vessels, two helicopters, one aircraft, and three thermo-vision vehicles. 100 border guards in addition to the current 530 border guards will be deployed by Frontex at the land and at the sea borders,” Von der Leyen noted.

She said the EU can provide financial assistance of EUR 700 million to Greece. This consists of EUR 350 million, which is immediately available, plus an additional EUR 350 million that can be requested as part of an amending budget. The financial assistance is for migration management generally, for setting-up and managing the infrastructure needed.

Moreover, a civil protection mechanism will be created in response to a Greek request. The assistance will include medical equipment, medical teams, shelters, tents, blankets, as needed.

It remains unclear how European unity can be forged in the refugee-migrant crisis as Europe’s EU partners have consistently refused to do the least to participate in burden-sharing following the mass influx of 2015 when Germany took in hundreds of thousands of migrants.

‘EU prepared to guard its borders’

On the purely symbolic level, however, the joint visit of Von der Leyen, European Council Co-President Charles Michel, and European Parliament President David Sassoli was intended as a message to Turkey and migrants that the EU is prepared to guard its borders in the framework of international law regarding the treatment of refugees.

She stressed that those (Ankara) who wish to test Europe’s resolve will be disappointed.

Michel: Europe must protect its borders

“The Greek borders are our European borders. Our presence sends a strong message. We trust the Greek government of @PrimeMinisterGR. Even if the task is very difficult it’s important as Europeans to protect our borders and show respect for international law and human rights,” Michel stated in a tweet.

“We saw what is going on here despite the (Turkish) propaganda and fake news,” the PM declared.

Turkey has accused Greece of mistreatment of migrants and of actions that have led to their dead.

The sole death in the migration flow was that of a seven-year-old child that drowned when the boat carrying migrants was purposely capsized and before Greek rescue workers reached the spot.

Erdogan’s move to place extreme pressure on Greece through massive migrant flows is seen by Greek analysts and a segment of the press as leverage to force Greece to share the oil and gas wealth within its Exclusive Economic Zone (EEZ) with Turkey.

“This is no longer (just) a refugee issue but also an asymmetrical threat at the borders of Greece and the EU that is proceeding by a plan that is turning Turkey into a human smuggler,” said Mitsotakis.

“The public threats of Tayyip Erdogan himself, the transport by bus of thousands of migrants to the borders, and the violence of those who want to charge into Greece confirm this reality and belie the propaganda and fake news.

ΕΕ : Στηρίζουμε την Ελλάδα στη διαχείριση της προσφυγικής κρίσης
TANEA Team 3 Μαρτίου 2020 | 19:14
Share
Δείτε επίσης
Περισσότερα άρθρα για Αγγλική έκδοση
Protecting the citizenry is a fundamental objective of contemporary democracies Editorial: Protection
Quite rightly the government in this phase has made public health its top priority Editorial: Priorities
How European Banking Supervision can help fight the economic consequences of the coronavirus outbreak in Europe
The past can teach us valuable lessons today and equip us for the future Editorial: Lessons
Neither the state nor society can wage this battle on their own Editorial: Rallying cry
Editorial: Action
We can be relatively optimistic because at least we got off to a good start in this struggle for survival. Editorial: Optimism
Editorial: Collateral damage
The Greek president reminded the EU of the values that Greece serves and that Europe must not cease serving Editorial: Messages
Greece takes sweeping measures to protect business, labour from coronavirus tempest
EU shuts borders to impede march of 'the enemy' Coronavirus pandemic
There can be absolutely no complacency or laxness in responding to the Coronavirus pandemic Editorial: Uphill battle
Health ministry announces slight rise in Covid-19, over 4,000 test conducted
At this time of crisis one must not enforce rules that were adopted for normal timeS Editorial: Trying times
Greek president takes to Facebook to unify nation in Coronavirus battle, stresses public health guidelines