The inter-party consensus in election included New Democracy, main opposition SYRIZA, and the centre-left Movement for Change. Many expressed hopes that this political consensus may be maintained . 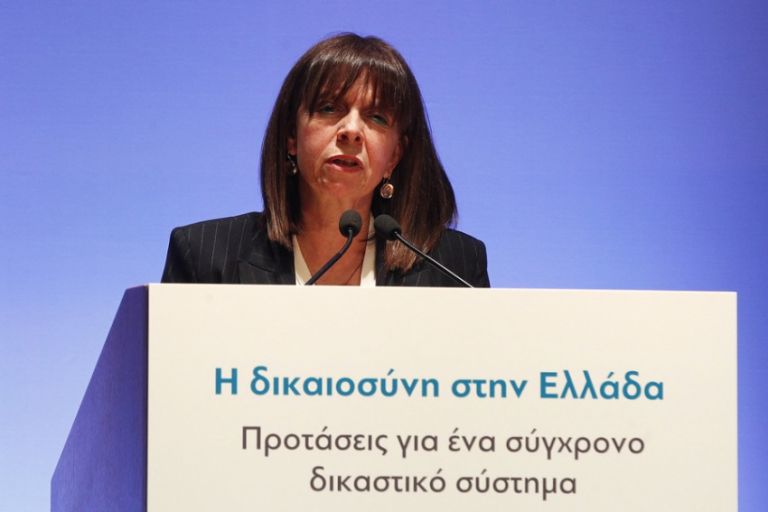 A parliamentary delegation visited Council of State President Ekaterini Sakellaropoulou at her office on 22 January to officially announce that Parliament has elected her as the next President of the Hellenic Republic, with 261 votes in the 300-member legislature.

Sakellaropoulou is to assume office on 13 March and will be the first woman to hold the office of President of Greece.
A two-thirds majority (200 MPs) is required to elect the president in the first round.

The inter-party consensus aside from ruling New Democracy included main opposition SYRIZA and the centre-left Movement for Change and many expressed hopes that this political consensus may be maintained in major national issues such as confronting Turkish threats against Greece and working together on a comprehensive medium and long-range plan for economic recovery.

Parliament President Kostas Tasoulas presented Sakellaropoulou with the result of Parliament's vote, underlining that her nomination was approved with a very large majority that greatly exceeded the two-thirds minimum required by the Constitution, indicating that she is beginning her tenure in a propitious manner.

Sakellaropoulou thanked Parliament for electing her and underlined that she is fully cognizant of the weighty responsibility she is undertaking.

"Our country is a modern state governed by the rule of law and is a force of stability, growth, and culture. An essential prerequisite for it to continue in this manner is to ensure its territorial integrity and its sovereign rights," Sakellaropoulou stressed.

"I look forward to a society that respects the rights described in the Constitution, the UN Charter of Fundamental Human Rights and the European Convention on Human Rights," she said.

The president-elect also noted crucial global problems such as the economic crisis, the climate change crisis, the displacement of populations, inequality, the protection of the weak, and growing challenges to the rule of law.

Sakellaropoulou called for a society that, supported by its long democratic tradition, will heal the hurts of the past and look to the future with optimism.

"For this future, I can assure you that I will give all my strength to fulfil my constitutional role," she said.

TANEA Team 22 Ιανουαρίου 2020 | 23:38
Share
Δείτε επίσης
Περισσότερα άρθρα για Αγγλική έκδοση
There is a danger of the war being viewed as something normal Editorial: Taking measures
Athens' objective was to avert concessions that might affect Greek interests Greece, Turkey declare their satisfaction with results of NATO summit
What is at stake is the strategic depth of the Alliance Editorial: A crucial NATO summit
European supervised drug consumption sites have been an inextricable part of drug treatment Editorial: The first step
The overturning of Roe v. Wade turns the clock back 50 years for American women. Editorial: Back and forth
Thymios' statement - “I no longer trust people.” – is a punch in the gut. Editorial: A punch in the gut
Editorial: Audits of politicians' wealth
Mario Draghi has a prominent position in the EU architecture Editorial: Alliance
After a certain point, the necessary caution is a matter of personal responsibility Editorial: COVID-19 and personal responsibility
Extremists still constitute a threat Editorial: Threat
A consciously responsible stance is needed Editorial: Maintaining COVID-19 alertness
The late PM Constantine Karamanlis famously said, 'We belong to the West' Editorial: Contradictions
The end of EU enhanced fiscal supervision signals the exit from the tunnel Editorial: Breakthroughs
Head of Greek Pomaks’ Association rips into Erdogan’s revisionist expansionism
All Greek governments since Andreas Papandreou's demanded the return of the Marbles Osborne: ‘Deal to be done’ on sharing Parthenon Marbles