Sakellaropoulou is noted, Mitsotakis said, for her 'groundbreaking rulings for the right balance between protecting the environment and economic development'. 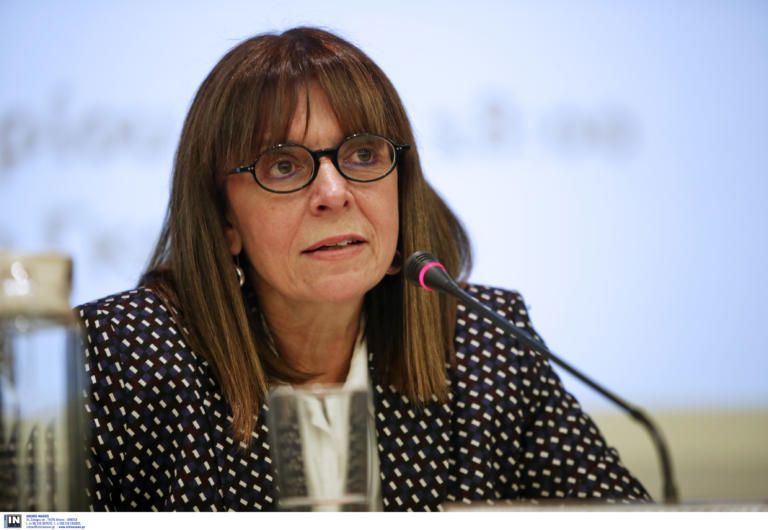 Prime Minister Kyriakos Mitsotakis has nominated Ekaterini Sakellaropoulou, the first woman chief justice of the Council of State, to be the first woman president of the Hellenic Republic.

The surprise nomination was announced by the PM in a nationally televised address on the evening of 15 January.

For months there was furious speculation about the PM’s criteria for picking the state’s highest official and the prospect of a woman nominee had been touted for quite a while.

A distinguished jurist, Sakellaropoulou has the profile of a centre-left progressive and thus is in line with the tradition of the PM picking a president not from his own party.

The last president who was not a politician was Christos Sartzetakis who served between 1985-1990 and was nominated by Andreas Papandreou.

He too was a judge and gained international fame in Costa Gavras’ film Z which storied his brave stance as investigating magistrate in the case of the murder of MP and left-wing icon Grigoris Lambrakis by organs of the right-wing deep state.

Sakellaropoulou, head of the country's highest administrative court, was not a member of the ruling New Democracy party, the premier underlined.

Former PM Alexis Tsipras tapped her for the top spot on the court and she was approved unanimously by the cabinet.

Consequently, SYRIZA is expected to support her, at least in the second round of voting, even though Tsipras backed incumbent Prokopis Pavlopoulos for a second term.

The centre-left Pasok-centred Movement for Change is also expected to back her as is Yanis Varoufakis’ MeRa 25, which would cumulatively secure a sweeping parliamentary consensus at a time that the country is striving for unity amidst grave geopolitical threats.

In his address, Mitsotakis said, "The decision I had to make was by no means easy, as the person fulfilling the role has to incorporate the nation's unity, have a sense of duty, knowledge, prestige and international experience.”

Despite the fact the office of president is largely ceremonial, the choice had to reflect Greece's renewal, and be "a window opening to the future.”

Sakellaropoulou is noted, Mitsotakis said, for her "groundbreaking rulings for the right balance between protecting the environment and economic development, and she has served as president of the Hellenic Society for Environmental Law."

She is also "known for her moderation, her sound judgment, and her interest in protecting individual rights, which is her focus," he noted.

Mitsotakis said she "is a nomination that is unifying, beyond partisan considerations, progressive, and meets all conditions to be approved by the entire body of MPs.”

He expressed the hope she would be supported by all parliamentary parties and that she would "symbolise the consensus that Greeks want very much."

Mitsotakis had earlier informed the current president, Prokopis Pavlopoulos, of his decision and thanked him for his service.

Pavlopoulos' term runs out in February.

The choice for the country's highest office "honors both the judiciary  and the modern Greek woman," Sakellaropoulou told the Athens-Macedonian News Agency (ANA-MPA), thanking the prime minister for his nomination.

"I accept the nomination and, if elected, will devote all my efforts to serving this exalted duty, as set out by the constitution," the judge said, adding that she will abstain from active legal duties as of now.

Sakellaropoulou was born in Thessaloniki in 1956 and completed her studies at the University of Athens Law School in 1978.

She studied during a leave of absence from her Council of State duties at the Sorbonne, Paris II (1989-1990).

She was tapped by Tsipras to head the Council of State in October, 2018.

Sakellaropoulou has extensive experience in teaching, as an educational and foreign ministry consultant, and as an officer of the judges' union.

She has served as president of the Hellenic Society for Environmental Law since 2015, and has actively worked on major environmental cases such as the diversion of Acheloos River in Thessaly and the preservation of the historic refugee buildings on Alexandras Avenue in Athens.

The author of several books, she speaks English and French

TANEA Team 16 Ιανουαρίου 2020 | 01:44
Share
Δείτε επίσης
Περισσότερα άρθρα για Αγγλική έκδοση
A businessman has the right to bar entry to his or her establishment of unvaccinated people Editorial: Reaching an understanding
Editorial: Privileges
The NATO Summit is bound to be newsworthy as it is Biden’s first Editorial: Lines
The government must ensure that the path toward modernisation will begin. Editorial: Changes
Covid free Kythnos island – 100% of the population vaccinated
Tourism minister in the Netherlands
There are strikes, like the one at the port, held just for the sake of declaring them Editorial: Conceptions
Ideally, we should fashion a new social and economic model for Greece Editorial: Model
The government must urgently undertake necessary initiatives to root out organised crime Editorial: Root out organised crime
COVID-19 vaccines and immunity: We are not among the lucky ones
Our era requires balances, seriousness, planning, and of course to defend one’s red lines Editorial: A coordinated foreign policy
The Turkish Foreign Minister confirms that the big goal is to convene a Mitsotakis – Erdogan meeting Exclusive Interview TO VIMA – Mevlut Cavusoglu: The “keys” for a solution
Fear could lead to slowing down the pace of appointments in the vaccine rollout Editorial: Choices
In our age, references to international law seem cliché or even something of a joke Editorial: Red lines of democracy
The UGS’s position on the recent statements made by Mr. Panos Laskaridis