You will say Erdogan is in power today. Certainly, Turkey has changed. What will not change unto the ages is that Turkey is our neighbour and will always be. 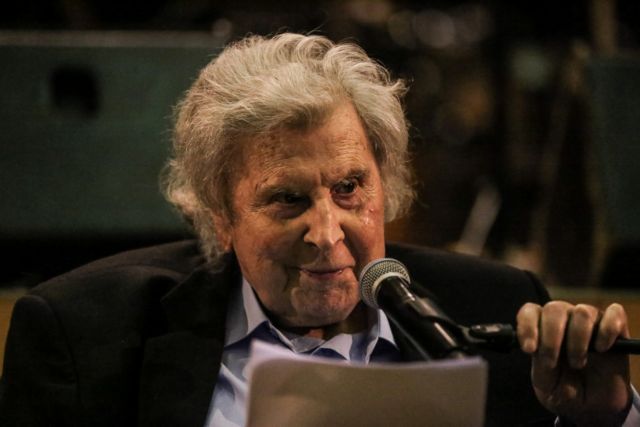 “Though due to my age I have withdrawn fro public affairs, the interview two days ago of Turkish-Cypriot leader Akinci with Ta Nea forces me to marshal my forces and speak again," said famed composer and left-wing icon Mikis Theodorakis in an opinion piece that was widely discussed

“In 1986, I took the initiative along with other friends in Greece and in Turkey to form the first Greek-Turkey friendship committee in Constantinople which immediately received support from both peoples.”

“Once I returned to Athens after the establishment of the committee, Pasok received me as a traitor. Not long afterwards, Andreas Papandreou invited me to his home in Kastri (north of Athens) to tell me “You are right. I had not seen things properly. That is why I called in the journalists who are awaiting us to admit that.”

“Immediately thereafter, he called in the entire committee to ask us to convey to Turkey his own message of friendship.”

“Hence, we went to Constantinople (Istanbul) to convey our message of friendship on behalf of Andreas Papandreou.

As I read his statement on camera for the then sole television station, the channel for the first time broadcast the image of the Greek PM.

“The next day in Ankara we held talks with all party leaders and naturally with PM Turgut Ozal. We conveyed to all the views of Andreas Papandreou about the start of a new era in bilateral relations and they were received enthusiastically.”

In Greece, we found the same accceptance, particularly in the provinces, where local committees had started to be formed, beginning with Preveza and Ioannina.

Immediately after Andreas Papandreou, Constantine Mitsotakis became Prime Minister and he asked me to convey the same message of friendship and cooperation to Ozal, who had become President of Turkey.

Along with the Turkish Committee for Greek-Turkish Friendship headed by Ankara University Professor Ekrem Akurgal, we visited large Turkish cities and were received with enthusiasm.

I am here recording what the two leaders told me:
Mitsotakis: “Let us make a new beginning, as did Eleftherios Venizelos and Kemal Ataturk.”

Ozal: “I am willing and thank the Greek Prime Minister. All that is said about expansionist policies are myths. Today the values of people are not measured in geographic area but rather by their social development.

“I am reducing our military expenditures by 2%.

“With the capitals accrued we shall build a second bridge in Istanbul, highways in Eastern Turkey, and the large Ataturk dam that will lift our economy.”

Then he showed me his cell phone which was then unknown to us, Theodorakis says, and asked me what my home phone number is and what foreign language my wife speaks.I said French. He called my number and said I am President Ozal, I am happy to speak with you and I’m passing you over to your husband.

I present these details to conclude after many decades my thoughts and initiatives regarding Turkey.

You will say Erdogan is in power today. Certainly, Turkey has changed. What will not change unto the ages is that Turkey is our neighbour and will always be.

Our peoples have nothing to divide as long as the leaders behave responsibly and realistically.

Now I come to the issue of hydrocarbons.

Since 2012, with my collaborators in the Spitha (spark) movement we presented studies by Antonis Foskolos, Theodoros Karyotis, Ilias Konofagos, Nikos Lygeros and others about the great wealth in the EEZ of the Eastern Mediterranean and we invited the government to declare Greece’s EEZ so as to protect gas and oil deposits that belong to Greece the value of which is estimated at trillions of euro.

So I ask, why does no Greek government dare to declare Greece’s EEZ?

I believe it is because the US and Europe do not allow it.As law professor emeritus Georgios Kasimatis has repeatedly stated, the first move must be the removal of related provisions in the bailout memorandums, on the basis of which any Greek revenues go to creditors.

I agree that the Turkish threat is an obstacle. That obstacle can be lifted perhaps if before that step we take an initiative to reach an understanding with Turkey.

Unfortunately the truth is that the declaration of Greece’s EEZ and the exploitation of its wealth is a complex issue. My view is that Turkey is surrounded by the sea and feels suffocated if for various reasons there a re substantial obstacles such as our islands which annul its exploitation of deep sea wealth.

I remember that the late Konstantinos Karamanlis who supported Greek-Turkish friendship told me that the Turks feel as we would if Salamis and Aegina were Turkish islands. I believe that we must comprehend the suffocation of Turkey and discuss lucidly here a realistic solution, a bilateral one.

It worth the effort to turn Turkey from a competitor into an a partner.

Dividing the wealth based on international law

As for the percentages of the wealth for each side that will be the result of negotiations based on international law and common sense in a spirit of justice and raw realism. This is better for Greek interests than creating a front with the risk of a military confrontation for the which the two peoples on either side of the Aegean will pay the price.

As regards Cyprus' President Anastasiades I wonder why when he began delimiting and rightly so Cyprus' EEZ he did not deem it very positive to seek the participation of the Turkish-Cypriots which would be a big step toward peace on the island. They live in the same country and that the fact that they are a minority places a greater responsibility on the majority to create the necessary tranquility that peoples need in order to achieve progress.

The presence of Turkish exploration and drilling ships (which demonstrates the degree of confusion on the Turkish side) cannot be addressed with the presence of foreign (oil and gas) companies and the US fleet. These are fleeting things but our neighbouring with Turkey will not change.

Shouting about the country's advantageous position at this juncture due to various fronts against Turkey and Greece being supported by the US and EU constitutes dangerous acrobatics. Imagine what will happen if Erdogan or his successor agrees to make Turkey an American base again. Then suddenly will change and our country and its people will be left to their own devices.

I believe this is our last opportunity if we want to benefit from our wealth and help our battered people and country to achieve the future they deserve and to have a self-sufficient and independent country with economic, social, and cultural development.

TANEA Team 13 Αυγούστου 2019 | 17:48
Share
Δείτε επίσης
Περισσότερα άρθρα για Αγγλική έκδοση
Today Greece has the opportunity to draft its own economic roadmap for the future Editorial: Challenge
Marinakis: «The result was clearly distorted – Dräger was fouled before the goal»
It is behind closed doors that the harshest stories of violence against women are hidden Editorial: Silence means sharing the guilt
Fourteen ICU beds, donated by Evangelos Marinakis, Angeliki Frangou and ION S.A. ready for use
SYRIZA in fact was not so eager to create a common front with the left Editorial: Political flirt
It is not too much to ask our political parties to adapt to the new realities Editorial: Time to build consensus
Any back-pedaling on the public health restrictions that have been imposed would be catastrophic Editorial: No to complacency!
Politicians can visit the historic Athens Polytechnic campus to leave a flower, as the PM suggested, or to lay a wreath as the main opposition leader proposed. Editorial: The cost
Perhaps the government could have handled the matter earlier and differently Editorial: Lives must be saved
We must deprive Turkey of its strongest weapon – the element of surprise Editorial: Equation
It is by now clear that Tsipras and Polakis are one and the same politically Editorial: Political cover
The only way to deter a disaster from the second wave of the virus is to get a vaccine and religiously comply with restrictive measures Editorial: Deterrence
There is an urgent need to strictly enforce the lockdown Editorial: Behaviours
As COVID-19 cases soar Greece announces three weeks nationwide lockdown
The freedom to disseminate applies to ideas and not the distribution of drugs Editorial: Breaking taboos