The government’s slew of handout and social benefits that are designed to lure voters does not appear to have substantially improved SYRIZA’s polling numbers. 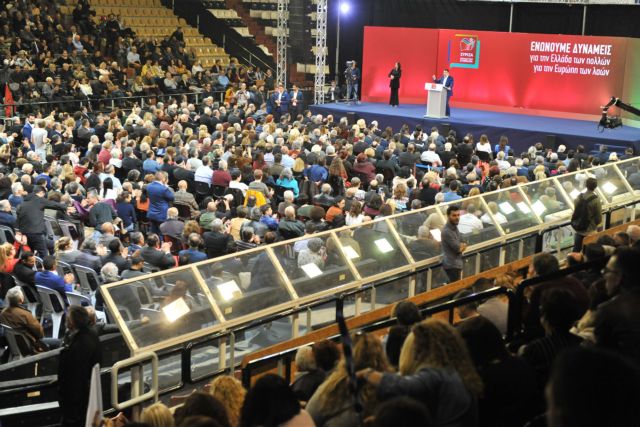 SYRIZA’s poor polling numbers and Prime Minister Alexis Tsipras’ decision to make a strong shift to the centre-left is causing fissures along with backstabbing between comrades who are anxious about the outcome of the 26 May European Parliament election and even more about the general election, as a large number of current MPs will almost certainly lose their seats.

All polls give main opposition New Democracy a large lead over SYRIZA and the current electoral system gives the top party a 50-seat bonus in the 300-member legislature.

MPs and party cadres are anxiously watching Tsipras’ feverish efforts to turn the tables by pledging everything to the very middle class (or former middle class) voters whom he has brought to their knees through over-taxation in order to exceed primary surplus targets and offer electoral handouts.

Those concerns are heightened due to the fact that the government’s slew of handout and social benefits that are designed to lure voters does not appear to have substantially improved SYRIZA’s polling numbers.

Another issue that is dividing the ruling party’s MPs and cadres is Alexis Tsipras efforts to push the party to the centre-left in an effort to reconstitute the political and ideological hegemony that Pasok enjoyed for over three decades.

Opponents of the move argue that it will damage the party’s popularity among left-wing voters which were its base when SYRIZA was garnering only four or five percent of the popular vote, and many MPs still rely on that pool of voters.

At the same time the group of 53+, an informal internal opposition comprised of over 50 MPs and cadres that has pushed for the party not to abandon its old left-wing principles during the long bailout memorandum period, has fired warning shots against the emerging “Pasokification” of the erstwhile radical left-wing party.

Another apparent battle is being waged between former foreign minister Nikos Kotzias’ Pratto (I act) movement and the supporters of the “Bridge” initiative to attract former Pasok ministers and MPs.

TANEA Team 30 Απριλίου 2019 | 14:49
Share
Δείτε επίσης
Περισσότερα άρθρα για Αγγλική έκδοση
In times of tensions military service is viewed as a national duty Editorial: Incentives for early military service
An emotional start in taking a position on developments in the region would be catastrophic Editorial: A measured response to Israeli-Palestinian conflict
The alternate interior minister said problems with COVID-19 self-tests will be resolved by the end of May Government poised to abolish mandatory SMD to leave home, working to solve self-test problems
If Syriza believes it can garner political gains with daily political transformations it is sorely mistaken Editorial: Political vertigo
Santander Consumer Finance begins activities in Greece
Evangelos Marinakis: Post-Covid Shipping and the Environment – Green Energy Investments
The US ambassador says Biden has “opened up a new vocabulary of cooperation” with Greece Pyatt see deeper US-Greece strategic ties under Biden administration
The case will be re-tried in the framework now set by the Council of State Bombshell Council of State ruling accepts state’s vaccine side-effect liability
May Day should be honoured with a single march each year Editorial: Unity
Transcending the collective crisis will require leadership and not troublemakers Editorial: Messages
After a six-month shutdown, workers in the restaurant business laid the tables Editorial: The first step
The government has repeatedly said that the existing framework is outdated Battle royal looms over government bill overhauling labour relations, limiting strike action
The labour trade union movement is an invaluable and irreplaceable weapon of workers An urgent need for the rebirth of the trade union movement
Editorial: The pendulum of American politics
The thirty-somethings rushed to be vaccinated for the sake of their families and their friends Editorial: Front-and-centre