The Finance Minister said the estimated cost of New Democracy’s announcements so far is 5bn euros in the first year and another 4bn over the next four years and that ND has not said where the money will come from. 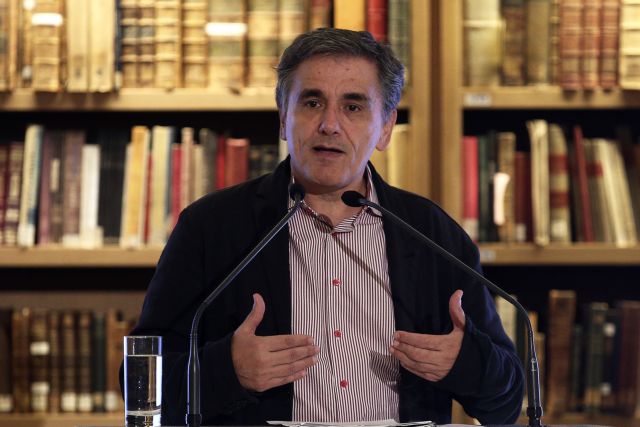 Finance Minister Euclid Tsakalotos said that SYRIZA and New Democracy should cooperate and forge a common front toward creditors in demanding a reduction of the high, 3.5 percent of GDP primary surplus target, the results of which he said fuel the rise of the far right.

Effectively, Tsakalotos completely agreed with main opposition leader Kyriakos Mitsotakis that there must a push to reduce those targets through a negotiation with creditors with a credible growth strategy, which he said New Democracy does not have.

“There is consensus across the political divide on this issue. I think 3.5 percent - and I’ve said it for an awful long time – is too high, especially for a country that has lost 27 percent of its GDP. I don’t think this should be something that we should disagree about,” Tsakalotos told CNBC television in an interview.

“We should go together and say in a Europe that has taken a lesson from the rise of the radical right and populist forces that such high primary surplus targets only feed into discontent, not only with political parties but with the political process itself. So I have no disagreement with the leader of the opposition that we need to do this, and it would be nice if he had a less conflictual attitude so that we actually could have consensus on this issue.

Asked whether if New Democracy comes to power SYRIZA would support him in renegotiating primary surplus targets with creditors Tsakalotos said, “We wouldn’t change our position just because New Democracy was in power – I don’t think it is very likely that they will be in power but in the unlikely and unfortunate eventuality that they are in power, of course if that was one of their main building blocks in what they want to do we would support them.”

Tsakalotos stressed that SYRIZA would not support them on a large number of issues “especially since we actually don’t know what their programme is”.

Tsakalotos maintained that the estimated cost of New Democracy’s announcements so far is 5bn euros in the first year and another 4bn over the next four years and that ND has given no serious response to the question where the money will come from.

Return to the markets

Asked how external factors such as the Italian economy could affect Greece’s return to the markets, Tsakalotos said that the cash buffer that Athens has accrued effectively means that the Greek debt is collateralised for the next two years.

“We’ve created a debt deal which means that we have lower repayment schedules than countries like Portugal and Spain over the next 15 years. That gives us the space in which to have serious discussion with opposition parties and social partners to have a growth strategy that begins to reduce the debt-to-GDP ratio from the denominator – from GDP by having a serious growth strategy. That’s what we’re trying to do,” the finance minister said.

TANEA Team 21 Φεβρουαρίου 2019 | 18:44
Share
Δείτε επίσης
Περισσότερα άρθρα για Αγγλική έκδοση
Greece’s role as an energy hub must be emphasised Editorial: Opportunities
Mitsotakis-Biden talks: Greek-Turkish relations, the war in Ukraine, wayward Turkey’s new role in NATO
It is not in Greece’s interest for Turkey to be isolated or humiliated Editorial: Opportunity
The Marshall Plan prioritised rebuilding export capacity How should a Marshall Plan for Ukraine work?
Drop in COVID-19 deaths - number of infections, intubated patients stable, hospital admissions rise
Policing of universities is an unpleasant but necessary measure Editorial: No excuse
A strict price inspections policy is needed to curb untrammelled price hikes Editorial: Dealing with inflation
Editorial: Axes
Ta Nea has repeatedly called for decisive action Editorial: University police force plan on the back burner
Everything depends on how the social media are used Editorial: Words
SYRIZA’s gains in 2012 were a Pyrrhic victory. Editorial: Populism
There will be a 600 euro cap on the rebate Amidst uproar over skyrocketing energy costs, Mitsotakis announces rebates for households
This is the 12th anniversary of the deadly arson attack Editorial: Radio silence
Many cases involving extremely serious crimes have not been tried Editorial: A bitter political legacy
EODY has recorded a total of 3.34mn COVID-19 infections EODY: 32 COVID-related deaths, over 8,000 infections, 660 reinfections, 231 intubated patients