Peace is not built on hasty visits. It is even more difficult to build when the country effectively lacks a foreign minister (as the PM has assumed the portfolio). 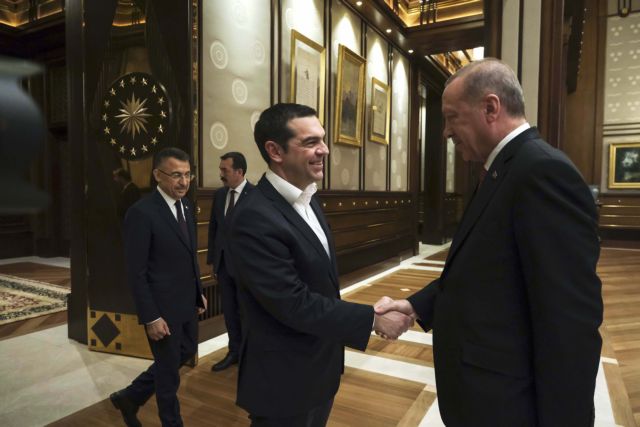 Prime Minister Alexis Tsipras could not but have felt uneasy when he learned upon his landing in Ankara that the country he was visiting had just a bit earlier declared a bounty of 700,000 euros on each of the eight Turkish military officers who had requested asylum in Greece.

He could not but have felt uneasy about an action which demonstrated that his host, the Turkish President, did not adhere to the basic rules of hospitality and indeed did not exhibit a modicum of respect for his guest.

Ta Nea in an editorial had underlined the dangers of a visit for which suitable preparations had not been made by delimiting the precise framework of the visit.

These reasonable concerns were confirmed. Aside from the bounty, Ankara made clear that the agenda would include issues which for Greek diplomacy have been steadfastly non-negotiable.

The question that arises is what was the motivation and utility of the Greek Prime Minister’s visit to Ankara?

It would be at least irresponsible for Mr. Tsipras’ visit to have been motivated primarily by the image of the peacemaker that he may want to cultivate on the international stage.

Peace is not built on hasty visits. It is even more difficult to build when the country effectively lacks a foreign minister (as the PM has assumed the portfolio) at a time when the presence of a seasoned and not ornamental foreign minister is needed.

TANEA Team 6 Φεβρουαρίου 2019 | 14:17
Share
Δείτε επίσης
Περισσότερα άρθρα για Αγγλική έκδοση
Pappas' case concerns how institutions were exploited during Syriza’s rule, between 2015 and 2019 Editorial: Duty
Editorial: Barbarity
In times of tensions military service is viewed as a national duty Editorial: Incentives for early military service
An emotional start in taking a position on developments in the region would be catastrophic Editorial: A measured response to Israeli-Palestinian conflict
The alternate interior minister said problems with COVID-19 self-tests will be resolved by the end of May Government poised to abolish mandatory SMD to leave home, working to solve self-test problems
If Syriza believes it can garner political gains with daily political transformations it is sorely mistaken Editorial: Political vertigo
Santander Consumer Finance begins activities in Greece
Evangelos Marinakis: Post-Covid Shipping and the Environment – Green Energy Investments
The US ambassador says Biden has “opened up a new vocabulary of cooperation” with Greece Pyatt see deeper US-Greece strategic ties under Biden administration
The case will be re-tried in the framework now set by the Council of State Bombshell Council of State ruling accepts state’s vaccine side-effect liability
May Day should be honoured with a single march each year Editorial: Unity
Transcending the collective crisis will require leadership and not troublemakers Editorial: Messages
After a six-month shutdown, workers in the restaurant business laid the tables Editorial: The first step
The government has repeatedly said that the existing framework is outdated Battle royal looms over government bill overhauling labour relations, limiting strike action
The labour trade union movement is an invaluable and irreplaceable weapon of workers An urgent need for the rebirth of the trade union movement