'I am not being blackmailed' PM Alexis Tsipras declares

Prime Minister Alexis Tsipras has declared that not even one iota of parliamentary rules should be changed. 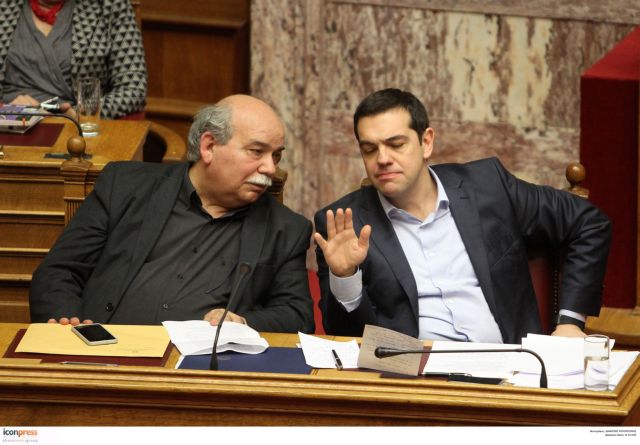 Following an uproar against plans to change parliamentary rules to permit leaders of parties that have lost their parliamentary status (because their group dropped to fewer than five MPs) to retain their privileges, Prime Minister Alexis Tsipras has declared that not even one iota of parliamentary rules should be changed.

The Prime Minister made his views known in a letter to Parliament Speaker Nikos Voutsis, in which he indignantly lambasted his critics.

Tsipras hastened to reverse the government’s plan following charges from the opposition and the press that he was being blackmailed by his ex-junior coalition partner Panos Kammenos, whose Independent Greeks party is about to lose parliamentary status. Kammenos has been publicly attacking the PM for days.

The text of Mr. Tsipras’ letter as released is as follows:

“You may recall that in our recent communication, last week, I expressed to you my concerns regarding the political and regulative irrationality of having parties which are elected to enter parliament with the vote of the Greek people, but along the way lose the requisite number of MPs and thus do not have the right to constitute a parliamentary group.”

“That irrationality lies in the fact that the law itself mandates that regardless of the number of MPs, broadcast time for parties allotted by the National Council for Radio and Television (ESR is the Greek acronym) and state funding for a party remains the same – and rightly so – proportional to the popular vote, whereas in Parliament party leaders lose their privileges including the time allotted for them to speak during parliamentary debate.”

“Following our conversation and having agreed with my thoughts, you correctly undertook an initiative to discuss this issue with representatives of the parties, in order to achieve the broad consensus that is needed to rectify this irrationality.”

“However, I have observed with surprise over the last days that primarily the main opposition party but other parties as well, along with a segment of the media, have reacted with incredible aggressiveness to a reasonable democratic sensitivity.”

“Some even reach the point of arguing and depicting the Prime Minister as supposedly being blackmailed.”

“For any possible ambiguity in the existing Parliamentary Rules, I would ask you kindly to submit the question to the Scientific Committee of Parliament so that it can issue an opinion.”