Gennimata expelled from the party the leader of the small, cooperating Democratic Left party, Thanasis Theocharopoulos. 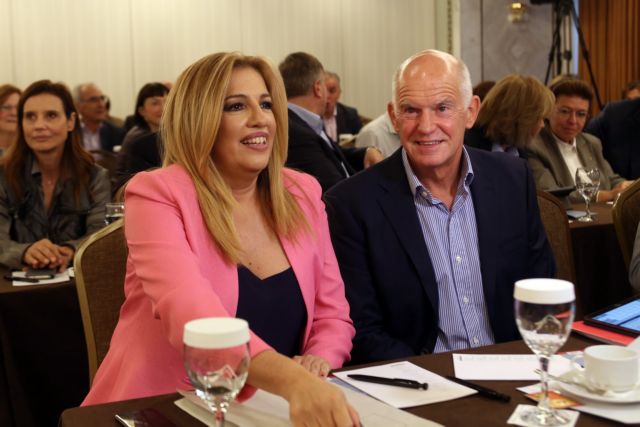 The meeting comes amidst deep divisions that rocked the party due to the ratification of the Prespa Accord.
Papandreou publicly expressed support for the agreement, while Gennimata imposed party discipline and voted down the agreement, leading to criticism that the party (largely Pasok members) abandoned its longstanding support for a compound name with a geographical marker added to the name Macedonia.

Gennimata expelled from the party the leader of the small, cooperating Democratic Left party, Thanasis Theocharopoulos, after his decision to back the agreement became known.

Large numbers of Democratic Left supporters are reportedly abandoning the Movement for Change as a consequence. Theocharopoulos had said that expelling him is tantamount to expelling the small party.
That was to be discussed at the meeting.

Also on the agenda was Papandreou’s candidacy in parliamentary elections and the electoral district that he can choose as a former PM. It is said that he wishes to represent Achaia, the ancestral homeland of the Papandreou family.

Papandreou’s brother Nikos has also expressed an interest in being a candidate for the European Parliament on the party’s ticket.

The meeting comes on the eve of a meeting of the party’s Executive Secretariat and before a meeting of its Central Committee, which will prepare for a March party convention.

Κωστής Παλαμάς, ένας από τους σπουδαιότερους ποιητές της Ελλάδας
TANEA Team 31 Ιανουαρίου 2019 | 17:47
Δείτε επίσης
Περισσότερα άρθρα για Αγγλική έκδοση
The hour of truth appears to be drawing near and it must be followed by the time for explanations Editorial: The moment of truth
Mayhem on Lesvos, Chios as hundreds of riot police clash with islanders determined to block migrant centres
In the economy words can help shape the climate but deeds yield results Editorial: Profile
Democracy has a duty to defend itself Editorial: Adventure
Editorial: Pillar
Editorial: Crisis
Government and opposition are skirmishing over the rubble in Mati Editorial: Duty
As it turned out Mega was too big to die Editorial: The return of Mega Channel
The government cannot address the problem of school violence on its own Editorial: Wave of violence
Job creation is the overarching aim so that society can prosper Editorial: Automatic pilot
Right now there must be delicate diplomatic manoeuvres abroad and a solid front domestically Editorial: Consensus
Editorial: Delusions
Editorial: Readiness
It seems that freedom of speech cannot be taken for granted in our country Editorial: Fascism
At last it seems that reason is prevailing over belief and superstition about vaccines Editorial: Sirens