The Independent Greeks leader and the rest of the protagonists in the government’s drama forget that governments are elected to rule, not to preoccupy themselves with power plays. 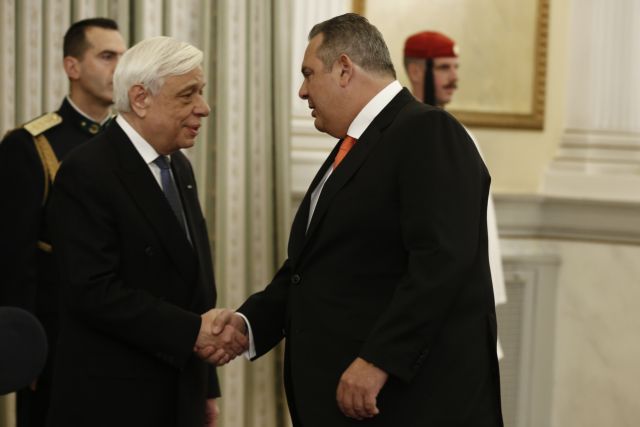 One cannot but be concerned by all that is transpiring within the government with its junior coalition partner, Independent Greeks leader and Defence Minister Panos Kammenos.

He has adopted a tactic of mixed messages, which harms not only the government’s cohesion, but also political stability.

It is becoming obvious that as the days go by and his political end approaches, he will intensify his attacks, creating loci of confrontation in a wider war.

The Independent Greeks leader and the rest of the protagonists in the government’s drama forget, however, that governments are elected to rule, and not to preoccupy themselves with power plays. They are elected to defend the public interest, not to have every cabinet member tending to his or her own interests.

That principle is all the more true for our country, which unfortunately is still in the midst of the adventure that resulted from the actions of the current government.

There are not many possible solutions. Either the government will secure the requisite majority to continue its work or it will go to the polls as soon as possible.

What is certain is that the country cannot move forward with a government which in every parliamentary vote on a bill will depend on the whims of those who declare that they support the government, when in fact they attack it with all possible means.

With all of its previous adventures and travails, this country cannot afford more adventures, including the inability of the government to govern.

Even more, it cannot endure yet another adventure in this wretched political climate.

Επιδότηση έως 85% για... πράσινα σπίτια - Ολο το πρόγραμμα
TANEA Team 7 Ιανουαρίου 2019 | 20:22
Share
Δείτε επίσης
Περισσότερα άρθρα για Αγγλική έκδοση
Olympiacos FC statement
Greece’s success in securing its interests at the EU summit shows the way Editorial: Opportunity
Ever since Syriza lost the July, 2019, elections it has appeared unable to adjust to its new role as main opposition party Editorial: Shoestrings
Why Russia? The answer is quite simple for those in the know  Hagia Sophia, Turkey, Russia and the West
Lights of hope: From Olympiacos Piraeus to the World
To continue to confront the coronavirus successfully one needs a combination of state care and individual responsibility Editorial: Time
Britain’s Ocado sees retail sales soar 27% in lockdown half