German Chancellery does not confirming backing for rescinding of pension cuts, stresses reforms

Asked by Ta Nea about pension cuts, Angela Merkel's office has signaled that the Greek government must stay the course of reforms, as agreed to this past summer, upon the completion of the third and last bailout memorandum. 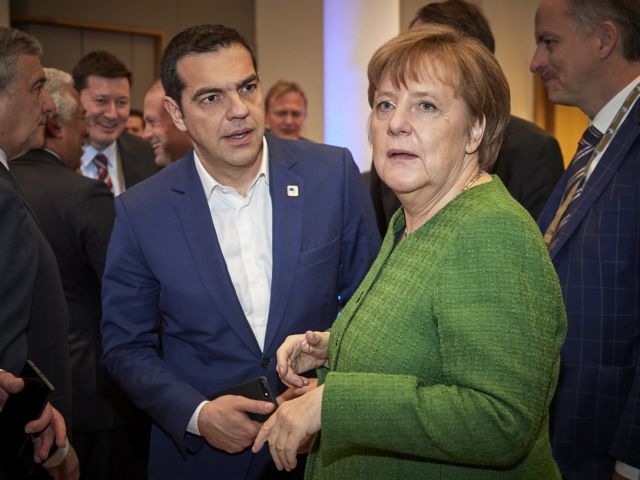 German Chancellor Angela Merkel's office has signaled that the Greek government must stay the course of reforms, as agreed to this past summer, upon the completion of the third and last bailout memorandum.

That clarification was given by the Chancellor’s press office in response to a question submitted by the daily Ta Nea, regarding scenarios of a postponement or cancellation of legislated pension cuts, due to take effect on 1 January, 2019.

Asked if the Chancellery can confirm press reports that Merkel is positive about Athens’ request to rescind the cuts, and that she is prepared, under certain conditions, to back their elimination, Merkel’s press office offered the following response:

“As a rule we do not comment on reports concerning supposed statements of the Chancellor. Independent of that, Greece, in the framework of its (bailout) programme and of its completion, committed itself to continue on the reform path, which was set by the ESM (European Stability Mechanism) programme. The implementation of this commitment is the object mainly of the post-memorandum (fiscal) surveillance by the institutions and the eurozone.”

The definitive decision on the cutting of pensions, or not, will be made by early December.

Until then, Athens and creditors will be in communication regarding the 2019 budget and pensions.

The narrative regarding a “clean exit” and a Greek success story due to the completion of the memorandum in August, was followed by the constant demands of creditors.

ESM chief Klaus Regling was clear in an interview with The Netherlands newspaper De Telegraaf.

“Greece has undertaken post-memorandum commitments, and creditors will judge and decide about what will be done about pensions in 2019, and about what the government will do with that part of the 2018 primary surplus that exceeds targets,” he said.

The government plans to submit to the European Commission on 15 October the two scenarios that were included in the 2019 draft budget – one with pension cuts and the other without – which was tabled in parliament last Monday.

It is possible that the final decision will be made before the final budget is tabled in parliament on 21 November.

TANEA Team 5 Οκτωβρίου 2018 | 14:37
Share
Δείτε επίσης
Περισσότερα άρθρα για Αγγλική έκδοση
Greece’s role as an energy hub must be emphasised Editorial: Opportunities
Mitsotakis-Biden talks: Greek-Turkish relations, the war in Ukraine, wayward Turkey’s new role in NATO
It is not in Greece’s interest for Turkey to be isolated or humiliated Editorial: Opportunity
The Marshall Plan prioritised rebuilding export capacity How should a Marshall Plan for Ukraine work?
Drop in COVID-19 deaths - number of infections, intubated patients stable, hospital admissions rise
Policing of universities is an unpleasant but necessary measure Editorial: No excuse
A strict price inspections policy is needed to curb untrammelled price hikes Editorial: Dealing with inflation
Editorial: Axes
Ta Nea has repeatedly called for decisive action Editorial: University police force plan on the back burner
Everything depends on how the social media are used Editorial: Words
SYRIZA’s gains in 2012 were a Pyrrhic victory. Editorial: Populism
There will be a 600 euro cap on the rebate Amidst uproar over skyrocketing energy costs, Mitsotakis announces rebates for households
This is the 12th anniversary of the deadly arson attack Editorial: Radio silence
Many cases involving extremely serious crimes have not been tried Editorial: A bitter political legacy
EODY has recorded a total of 3.34mn COVID-19 infections EODY: 32 COVID-related deaths, over 8,000 infections, 660 reinfections, 231 intubated patients