Turkey has every right to be concerned about its security, but its leader does not have the right to interpret international treaties any way that suits him. 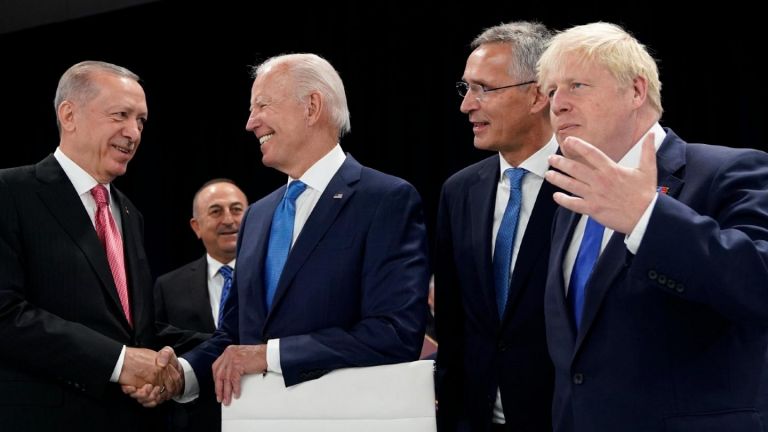 The Russian invasion of Ukraine triggered an immediate, dynamic, and unifying reaction in the West on the political, economic, and military levels.

The civilised world thus sent a message that it is not prepared to tolerate a violation of borders, annexation of territory, or the violation of international law more generally.

This message, however, cannot be transmitted selectively.

The sensitivities of the West regarding values and principle cannot be contingent upon its interests, and even if the violent exportation of democracy was drowned in blood in Iraq, the free world still has a duty to react whenever democratic freedoms are trampled over.

Turkey has every right to be concerned about its security, and its president has the right to hold talks with any leader he wishes.

He does not, however, have the right to interpret international treaties any way that suits him.

He has no right to threaten and blackmail, and above all he does not have the right to demand that democratic countries disavow their principles.

Just as Recep Tayyip Erdogan believed in the past that a Greek prime minister could “promise” him that he would extradite eight Turkish military officers who fled to Greece, after the abortive coup against him (with no evidence they were involved), seeking international protection, so too today he believes that the prime ministers of Sweden and Finland can “commit themselves” to extradite Kurdish and Turkish expats whom he accuses of terrorism, and he made his approval of these two countries’ NATO membership contingent upon their meeting this “commitment”.

Judging other countries by the standards that he implements in Turkey, Erdogan forgets that democratic countries have an independent judiciary that decides, after weighing all the evidence, whether the extradition of a citizen is legally mandated and morally acceptable, and that only in undemocratic and authoritarian states is there no separation of powers.

Western capitals, large and small, are well aware of all this.

If confronting Russian aggression remains their paramount objective, it does not justify compromises with other authoritarian and revisionist countries and leaders.

TANEA Team 2 Ιουλίου 2022 | 21:37
Share
Δείτε επίσης
Περισσότερα άρθρα για Αγγλική έκδοση
Resignations are not enough, nor would a cabinet reshuffle or snap election suffice Editorial: Transparency now!
Citizens seek persuasive solutions to the problems of daily life Editorial: Restoring trust in political parties
Last year in Greece there were 17 femicides Editorial: An urgent wake-up call
Stavros Psycharis never allowed himself to become subjugated. He never censored. Editorial: The death of a journalist
Psycharis He began his long career at the Lambrakis Press in 1972 Renowned journalist, publisher, entrepreneur Stavros Psycharis has died age 77
It is inconceivable for the average citizen to be defenceless amidst major economic trials Editorial: A model programme
Greece now has experience and an enhanced plan of deterrence Editorial Ta Nea: Maintaining composure
'I truly feel that the future of humanity is dark' God at Ground Zero: How a Mount Athos monk fit 9/11 into Byzantine iconography
Hatzidimitriou shattered the stereotype that women are not good at maths Editorial: Worthy role Models
A great reform was necessary but seemed unfeasible0 Editorial: Modernisation of the state
Editorial: The need for an in-depth investigation
Justice delayed is justice denied Editorial: Swift justice
A revival of populism is exploiting the natural anxieties of citizens Editorial: President Katerina Sakellaropoulou's message
Editorial: Mandatory reforestation after the wildfires
The EU is already facing adverse conditions due to the war in Ukraine Editorial: The major crisis the EU faces and the great leap forward