As Prime Minister Kyriakos Mitsotakis said, the door of dialogue remains open, but it cannot be based on threats. The modernisation of Greece’s defence system is a national strategy. 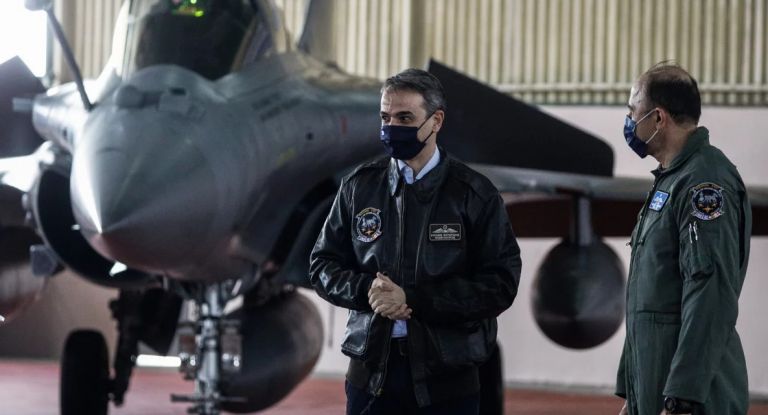 The arrival in Greece of the first batch of French Rafale fighter jets is a turning point.

This is due not only to their advanced electronic and weapons systems that will give Greece a significant advantage in a period when the situation in the Eastern Mediterranean is still tense.

It is the result of a major defence agreement with France and it coincides with the French presidency of the European Council.

It places Greece at the centre of European developments and sends a warning to Turkey.

As Prime Minister Kyriakos Mitsotakis said, the door of dialogue remains open, but it cannot be based on threats.

The modernisation of Greece’s defence system is a national strategy and a necessary choice given Ankara’s aggressive policies.

That is why it is imperative for the weapons programme to be implemented immediately, without backpedaling, in order for Greece not to lose the dynamic it has gained and to contribute to stability in the wider region.

Speed, however, does not mean sloppiness. Greece has in the past paid a very high price for imprudent political and economic moves.

For that reason, and because of successive crises, it has been 15 years since Greece last upgraded its defence arsenal, and there is no room for further delays.

TANEA Team 20 Ιανουαρίου 2022 | 14:38
Share
Δείτε επίσης
Περισσότερα άρθρα για Αγγλική έκδοση
Mitsotakis underlined Greece’s crucial geostrategic position PM Kyriakos Mitsotakis’ historic speech to Joint Session of US Congress (full text)
A party without self-criticism and renewal cannot move forward Editorial: Political parties transforming
Greece’s role as an energy hub must be emphasised Editorial: Opportunities
Mitsotakis-Biden talks: Greek-Turkish relations, the war in Ukraine, wayward Turkey’s new role in NATO
It is not in Greece’s interest for Turkey to be isolated or humiliated Editorial: Opportunity
The Marshall Plan prioritised rebuilding export capacity How should a Marshall Plan for Ukraine work?
Drop in COVID-19 deaths - number of infections, intubated patients stable, hospital admissions rise
Policing of universities is an unpleasant but necessary measure Editorial: No excuse
A strict price inspections policy is needed to curb untrammelled price hikes Editorial: Dealing with inflation
Editorial: Axes
Ta Nea has repeatedly called for decisive action Editorial: University police force plan on the back burner
Everything depends on how the social media are used Editorial: Words
SYRIZA’s gains in 2012 were a Pyrrhic victory. Editorial: Populism
There will be a 600 euro cap on the rebate Amidst uproar over skyrocketing energy costs, Mitsotakis announces rebates for households
This is the 12th anniversary of the deadly arson attack Editorial: Radio silence