Ankara’s geopolitical shift toward Moscow and the accompanying threat to the cohesion lies at the core of US-Turkey disputes. 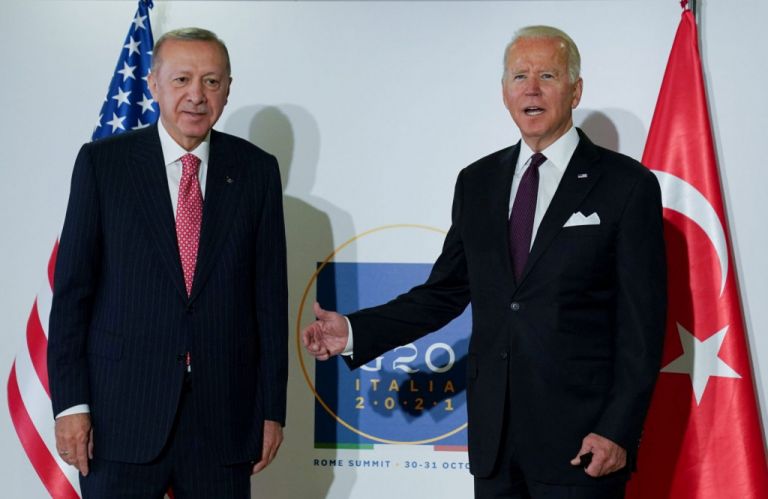 After months of tense bilateral US-Turkey relations with sharp public recriminations between the two leaders, US President Joe Biden and Turkish President Recep Tayyip Erdogan held talks on the sidelines of the G20 meeting in Rome today.

In the nine months since he assumed office, Biden has maintained a tough stance toward Turkey on a host of issues that have infuriated the US Congress and the American military establishment, from Ankara’s tight embrace with Moscow and its refusal to back down on the procurement of Russian S-400 missile systems, to Turkey’s military interventions in Syria and Libya and its expansionist and destabilising actions in the Eastern Mediterranean, where Turkey has positioned itself as an aggressive regional power, effectively ignoring the overarching geopolitical role of the US in the region.

Ankara’s geopolitical shift toward Moscow and the accompanying threat to the cohesion of NATO, in which Turkey has the second largest army, lies at the core of US-Turkey problems. Though Washington would like to bring Turkey back into the fold, Biden has made it plainly clear that it will not happen on Ankara’s terms.

The White House readout on the meeting combined the carrot and the stick - an initial conciliatory overture with a firm insistence on Washington’s positions on geopolitical disputes.

“President Biden underscored his desire to maintain constructive relations, expand areas of cooperation, and manage our disagreements effectively. He expressed appreciation for Turkey’s nearly two decades of contributions to the NATO mission in Afghanistan,” the statement read.

Though Erdogan has repeatedly sought a meeting with the US President in the nine months since he assumed office, Biden’s steadfast refusal was one of many strong signals toward Ankara that any rapprochement will happen on Washington’s terms and not based on Turkey’s pretence of being an untouchable regional power that acts unilaterally and ignores its allies.

Washington’s decision to remove Ankara from the next-generation F-35 fighter jets programme and its recent reluctance to accept Turkey’s recent alternative proposal to procure a large batch of F-16’s is indicative of the lingering big chill in bilateral ties.

Erdogan’s recent decision to expel 10 Western ambassadors, over their support for the release of a prominent political prisoner, which was promptly revoked amidst a political uproar, reflected by the fact that Erdogan is still digging in his heels in his disputes with Washington.

Defence partnership with intense US concerns

“President Biden reaffirmed our defense partnership and Turkey’s importance as a NATO Ally, but noted U.S. concerns over Turkey’s possession of the Russian S-400 missile system. He also emphasized the importance of strong democratic institutions, respect for human rights, and the rule of law for peace and prosperity,” the statement read, underlining Erdogan’s autocratic leadership and contempt for the rule of law in his country.

Moreover, the readout indicated that the two leaders discussed the full list of hot button issues.

“The leaders discussed the political process in Syria, the delivery of humanitarian assistance to Afghans in need, elections in Libya, the situation in the Eastern Mediterranean, and diplomatic efforts in the South Caucasus. President Biden reaffirmed our defense partnership and Turkey’s importance as a NATO Ally, but noted U.S. concerns over Turkey’s possession of the Russian S-400 missile system. US, Turkey agree on formation of joint mechanism to strengthen, improve bilateral ties, following a meeting between countries' presidents in Rome.'

“US, Turkey agree on formation of joint mechanism to strengthen, improve bilateral ties, following a meeting between countries' presidents in Rome,” the agency reported.

“Turkish, US presidents discuss steps to be taken in line with common perspective to expand bilateral trade volume during their meeting.”

TANEA Team 31 Οκτωβρίου 2021 | 15:42
Share
Δείτε επίσης
Περισσότερα άρθρα για Αγγλική έκδοση
We have the weapons. We have fine scientists. We have the experience. We can. Editorial: Urgency
There were delays and tragic omissions in offering proper services to patients Positive Voice in a rough terrain: A look back at the history of HIV/AIDS in Greece
Greece has a multi-faceted policy in its foreign relations and that is how it should continue Editorial: Sobriety in foreign relations
We see irresponsible behaviours and an attitude that the virus is no longer with us Editorial: Behaviours
The virus recognises no geographical borders Editorial: Nobody is safe
Delays and foot-dragging have long led even to the denial of justice Editorial: Expediting justice
Erdogan’s insistence on keeping interest rates low led him to fire three central bankers Editorial: Turkey’s lonesomeness
Turkey traditionally exports its domestic crises Editorial: Turkey's domestic, foreign crises
Nobody has the right to deny their share of responsibility in the common effort Editorial: Joining forces to confront the pandemic
Of intubated patients, 83 percent are unvaccinated or partially vaccinated EODY: 105 COVID-19 deaths, 7,287 infections confirmed in the last 24 hours, 608 intubated
We must continue to insist that the state is obliged to be citizen-friendly Editorial: 'Guinness World Record'
Behind Lukashenko stands Putin, who backs and assists him Editorial: European sovereignty
The pandemic is an issue of life and death, and the protection of public health is a common aim Editorial: Consensus on managing the pandemic, even at the last minute
The measures announced are tantamount to an at least partial lockdown on the unvaccinated Mitsotakis announces partial lockdown on unvaccinated citizizens, tougher enforcement
Greece accuses Sanchez of ignoring EU decisions after agreement to sell aircraft carrier to Turkey