'The two countries underlined the importance of respect for international law and the peaceful resolution of differences, as a guiding principle to good neighbourly relations.' 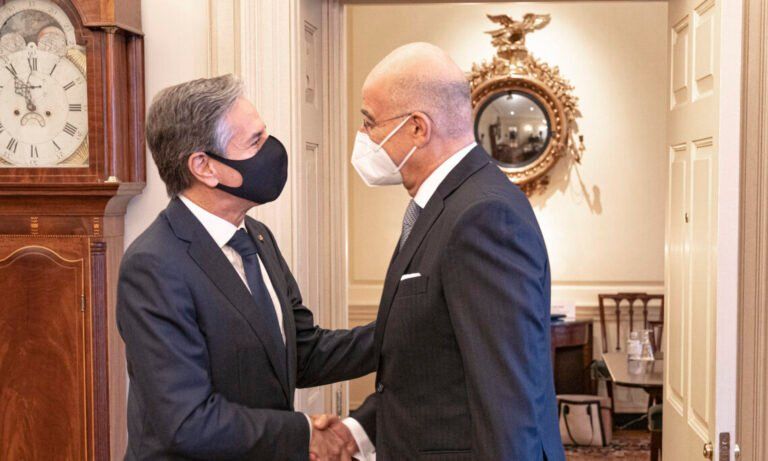 Though public attention over the last days in Athens focused on yesterday’s signing of the bilateral, revised US-Greece Mutual Defence Cooperation Agreement (MDCA), which is as US Secretary of State Anthony Blinken stated the “bedrock” of the two countries’ defence cooperation, less attention was paid to the importance of the latest round of the US-Greece Strategic Dialogue that was held in Washington the same day.

The strategic dialogue was launched with much fanfare in Washington in December, 2018, by then US Secretary of State Mike Pompeo and Greek Foreign Minister Yorgos Katrougalos, when SYRIZA was in power.

“The Strategic Dialogue builds on a year of intensive engagement, highlights the strength of the bilateral relationship, and confirms the mutual commitment of the United States and Greece to deepen cooperation,” the two sides said in a joint statement at the time.

Beyond defence issues, the dialogue became the foundation of an official, exceptionally broad and deep cooperation between the two countries. It was rightly seen as the take-off of a vastly expanded relationship based on mutual interests on the bilateral, regional, and international level – including the two countries’ strategic cooperation with Israel - and it was hailed as such at the time.

The second round was held in October, 2019, after the current New Democracy government.

Third round of dialogue

Yesterday’s third round came at a time that Turkey has drastically escalated it provocations against Greece both in the Eastern Mediterranean, and it became perfectly clear in remarks at yesterday’s signing of the revised MDCA and then in the joint statement on the strategic dialogue that Athens looks to Washington as a strategic partner in its battle to deter Turkish aggression and threats. References to America’s respect for Greece’s sovereignty and territorial integrity were made in that framework.

“The two countries underlined the importance of respect for international law and the peaceful resolution of differences, as a guiding principle to good neighbourly relations and as a means to resolving problems and addressing tensions,” the statement read.

A similar formulation was adopted by the US Secretary of State in a non-binding statement accompanying the MDCA, the full text of which has not yet been released.

Today’s joint statement details the major expansion and deepening of US-Greece relations over the last three years in every conceivable area of politics and international affairs.

The full text of key sectors of the cooperation are as follows:

The United States and Greece underscored the continued importance of working together to strengthen peace and prosperity across the region. The two governments exchanged views on the Eastern Mediterranean, the Western Balkans, European and transatlantic institutions, and migration. The two countries also discussed wider international issues, including developments in the MENA region, Russia, and China. Greece and the United States reinforced their commitment to a rules-based system and respect for international law, including international human rights obligations. They lauded the resumption of exploratory talks and stressed the importance of avoiding destabilizing actions. They emphasized the importance of diplomacy, good-neighborly relations and peaceful resolution of differences between countries.

Both noted the importance of respecting sovereignty, sovereign rights, international law, including the law of the sea, and existing regional frameworks to prevent future tensions. They also reiterated their dedication to enhancing their close cooperation, using all appropriate means at their disposal to safeguard stability and security in the wider region. The United States applauded Greece’s recent efforts to deepen ties with neighbors across the Eastern Mediterranean to enhance stability. The two sides reiterated their desire to bolster cooperation through the 3+1 format (Greece, Cyprus, Israel, plus the United States) on energy issues, economic development, counterterrorism, and the climate crisis and associated humanitarian challenges which recently affected the region. Greece and the United States reaffirmed the importance of the full, consistent and in good faith implementation of the Prespa Agreement. Both parties resolved to support continued integration, investment, and infrastructure development of Western Balkan partners.

The United States and Greece both continue to strongly support the Euro-Atlantic integration of the Western Balkans, including Kosovo, and stress the importance of urgently commencing accession negotiations between EU and both Albania and North Macedonia according to the set conditionalities. Both sides highlighted recent successes in national public health policies designed to curb the COVID-19 pandemic and cited the need to dispel disinformation and other malign influences that threatened public safety. Both sides discussed priorities in responding to the humanitarian crisis in Afghanistan. Greece shared the progress made in processing and integrating asylum-seekers and refugees; both countries affirmed the importance of respecting the human rights of asylum seekers, migrants, and refugees.

The United States and Greece welcomed the recent update to the Mutual Defense Cooperation Agreement (MDCA), which greatly contributes to the security of both nations and reflects our long-term, deepening and expanding, strategic defense partnership and cooperation and Greece’s geostrategic importance in contributing to the stability of the region.

Both sides reiterated their firm determination mutually to safeguard and protect the security, sovereignty, independence and territorial integrity of their respective countries. They both emphasized the continued importance of bilateral exercises and training activities throughout Greece that enhanced their ability to address regional security issues. Both countries expressed interest in enhancing cooperation on security issues in the Western Balkans, Middle East, and North Africa, and the Eastern Mediterranean regions, and in that respect the United States acknowledged the importance of Greece in promoting stability and cooperation in the wider periphery.

The two governments expressed the joint desire to assist each other in maintaining strong and capable militaries and increase their modernization and interoperability. The United States highlighted the F-16, S-70B, and P-3B upgrades and Greece’s procurement of MH-60R anti-submarine helicopters. The United States welcomes Greece’s expression of interest to join the F-35 fighter program. The United States expressed appreciation that Greece continued to exceed the 2014 Wales Summit pledge to spend at least 2 percent of GDP on defense and 20 percent of its defense budget on modernizing major equipment. The United States also thanked Greece for its many contributions to NATO’s 20-year mission in Afghanistan.

The United States and Greece welcomed the initial recovery of their economies from the COVID-19 pandemic and looked forward to deepening trade and investment across various sectors. Both governments stressed the importance of bilateral trade and investment consistent with broader multilateral frameworks such as the U.S.-EU trade policy.

They lauded the recent inaugural meeting of the U.S.-EU Trade and Technology Council (TTC), with the aim to expand and deepen transatlantic investment and update the rules-based framework for the 21st century economy. In this context, Greece stressed the importance of a transatlantic accord for removal of trade measures against EU on steel & aluminum that directly affect bilateral trade. Greece also stressed the importance of enhancing bilateral cooperation on mutual recognition of control systems for the entry of Greek agri-food products to the United States. Both sides hailed the presence of significant new U.S. investments in Greece’s technology and digital sectors following the 2020 signing of our Science and Technology Agreement and Greece’s removal from the USTR 301 Watch List.

The United States congratulated Greece on its continued development of Thessaloniki as a regional technological and educational hub and expressed support for significant U.S. tech investments to further develop Greece’s digital economy. Greece highlighted the main incentives granted for private and strategic investments with a special reference to the Emblematic Investments and the Just Development Transition Plan. Both sides welcomed bilateral cooperation on emerging technologies.

Both sides reiterated their support for women’s economic empowerment, with the United States highlighting TechCamp Thessaloniki, a U.S.-funded program designed to support women-led startups and create equal opportunities in the entrepreneurship ecosystem. The United States and Greece noted they look forward to exchanging views on trends and best practices regarding investment screening. The United States highlighted the new Build Back Better World initiative as a possible area of cooperation for investment in low and middle-income economies.

The United States also welcomed the investment of Greek companies in the United States. Through an innovative program in cooperation with Enterprise Greece, 43 companies from Greece participated in the annual SelectUSA Investment Summit last June – the largest delegation ever from Greece. The United States welcomed more investment successes from Greece. The United States welcomed the proposal of Greece for the signing of an MOU on Tourism. Both sides reiterated the importance of enhancing bilateral tourism flows. Greece expressed its satisfaction for the maintenance of flights uniting the two countries. Both countries intend to consider the establishment of new all year-round air connections.
Energy and Environment

The United States and Greece recommitted to their shared goals of increasing energy diversification and security, promoting fair and equitable access to greener sources of energy, and addressing climate change through decarbonization policies. The United States lauded Greece for its growing role as a regional energy hub and welcomed completion of the Trans-Adriatic Pipeline and progress on the Interconnector Greece Bulgaria, set to become operational in 2022. Greece shared developments on other regional energy projects that will further diversify regional energy supplies and support the phaseout of coal, such as the planned Greece-North Macedonia Interconnector and the Floating Storage Regasification Unit in Alexandroupoli.

Both sides celebrated the increasingly interconnected energy relationship between Greece and the United States, both in terms of bilateral trade and investment and as a positive driver of progress towards energy security and diversification goals. Greece pointed out the importance of natural gas discoveries by Israel, Cyprus and Egypt as a valuable diversified energy source for southern and southeastern Europe.
Greece reiterated its goal to phase out lignite by 2025, and the United States praised Greece’s steps forward on its 2019 National Energy and Climate Action Plan. Both sides acknowledged the importance of a diversified strategy to support the energy transition and our broader goal to achieve net zero emissions by 2050. This includes opportunities to expand energy efficiency initiatives and increase the supply of clean energy resources like offshore wind, energy storage, and hydrogen.

The United States highlighted increasing U.S. investments in green energy projects in Greece and stressed the need for continued decarbonization and renewable energy development, and Greece shared updates on its planned windfarms and solar energy projects.

TANEA Team 15 Οκτωβρίου 2021 | 15:51
Share
Δείτε επίσης
Περισσότερα άρθρα για Αγγλική έκδοση
Over the last days the image of our country has not been attractive Editorial: A different image of Greece
There will be more weather crises in the future Editorial: Deficiencies
This young woman heard the message of other women that preceded her Editorial: Catharsis
Balances with the Russian side are very delicate and must be maintained Editorial: Composure
'Greece is a significant and wise actor in this part of Europe' Kosovo FM Donika Gervalla–Schwarz: ‘We are not begging for recognition from Greece’
People want answers, persuasive plans, and arguments Editorial: Maturation
The pandemic and citizens’ fears regarding inflation have shocked households Metron Analysis poll: SYRIZA trails New Democracy, KINAL-PASOK skyrockets
It is imperative for the weapons programme to be implemented immediately Editorial: Arrivals
The charges of the victim garnered attention nationwide Editorial: Support
Greece is a peaceful Western country Editorial: Vigilance
Both SYRIZA and PASOK are in a transitional phase Editorial: Changes
Tsipras posts on the social media and frequently as possible Editorial: Obligations
Universities have become a sort of state within the state Editorial: Enough is enough!
Nobody for whatever reason has the right to beat a professor Editorial: Zero tolerance
The shift in America’s priorities should come as no surprise Editorial: Fluidity