Mitsotakis rules out any prospect of political consensus with SYRIZA

Amidst rampant talk about the prospect of snap elections, Prime Minister Kyriakos Mitsotakis sendt a strong message that his government will serve out its full, four-year term. 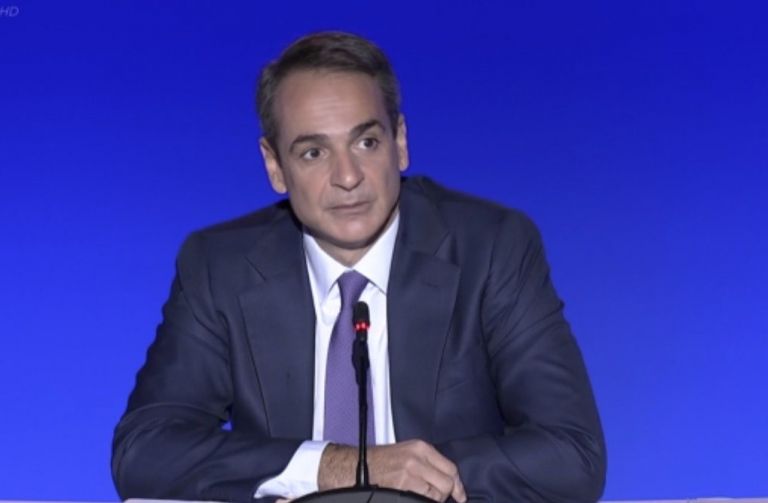 Amidst rampant talk about the prospect of snap elections, Prime Minister Kyriakos Mitsotakis sendt a strong message that his government will serve out its full, four-year term at the annual PM’s news conference at the Thessaloniki International Fair (TIF).

Moreover, Mitsotakis said there is no possibility of reaching any consensus with main opposition SYRIZA, for which he blamed main opposition leader Alexis Tsipras, and that he seeks consensus only with the Greek people.

Referring to his major keynote speech yesterday at TIF and the economic policies that he announced, the PM said that, “I am avoiding the terms “hand outs” and “big basket” that journalists in the past have used to describe government economic policies announced at TIF each September.”

“All the measures announced are part of a comprehensive strategy to increase wealth, which must be justly distributed. Reducing inequalities is my central choice,” he said.

In that framework, Mitsotakis spoke of the social forces on which he is relying for support of the measures, with the main one being the middle class, the core of which is small-to-medium-sized businesses.

Moreover, in his speech yesterday, Mitsotakis said that the country’s youth is at the centre of economic planning and that his government has hammered out measures to help them find jobs.

Mitsotakis was cautious in outlining the government’s management of the pandemic. He adamantly declared, however, that there will be no shut down of the economy again.

He also conceded that he made a mistake in not imposing a lockdown in Thessaloniki last October (experts had advised him to do so), when a huge COVID-19 epidemic began in northern Greece.

He also expressed the resolve, regarding Greek-Turkish relations, to defend national sovereignty at all costs, and he reiterated that Greece’s borders are closed to any further refugee flows, particularly from Afghanistan, where he said neighbouring countries must be bolstered in order to receive the refugees.

Dividing lines and the electoral dilemmas of 2023

Regarding the economy, the PM said that, “Our policies are not expansive. They are measured.” He said he considers as a given the revision of the EU’s Stability Pact.
“As of 2023, I consider it a given that we shall return to normalcy and that the country will be able to achieve primary surpluses.”

Mitsotakis outlined the political preconditions for implementing his economic policies, drawing a clear dividing line with SYRIZA leader and former PM Alexis Tsipras, and effectively presenting the stark choices that will emerge in the next general election in 2023, which he said will pose the same dilemmas that existed in 2015, when SYRIZA clashed with the EU over the last bailout memorandum.

Asked if certain choices of ministers from the right-wing of ND signals a further shift to the right, the PM said that, “I do not use right-wing scales or left-wing scales to weigh (the government). I want the government to be measured in terms of kilometres of progress and to express a sweeping alliance with citizens who want works, an alliance that creates a synthesis and does not divide. There are ministers who do not come from the ranks of New Democracy, but rather from the centre and centre-left. ND expresses the political spectrum from the left to the centre-left. When I choose ministers, I examine whether they can serve the government’s policy,” he said.

‘Those who dream of new indignados are deluded’

Mitsotakis ruled out a new movement of indignados, like the one which fought the bailout memorandums, that could challenge his government.

“Mr. Tsipras has chosen the path of personal attacks against me and my family. Have no doubt about who is directing the sewer (of criticism) on the internet. We feel that there is a chasm between us and SYRIZA in terms of values and politically.”

“That does not mean that society is being divided. I have a duty to conduct a dialogue with society and avoid tensions. If some people think society is where it was in 2011 and dream of a new wave of indignados, they are fooling themselves. You can ask Mr. Tsipras what he hopes to gain from these attacks. The main opposition is harming itself if it believes that it will disorient me with personal attacks.”

Asked about the botched appointment of Admiral Evangelos Apostolakis (who refused at the last minute), a former SYRIZA defence minister, to the post of Civil Protection Minister, the PM dropped barbs against Tsipras without naming him.

“I am very optimistic about the course of the Greek economy. The conditions will be favourable when we again seek the trust of the Greek people…The trustworthiness of this government will be compared to that of the previous one,” the PM said regarding the next general election.

“At the end of our four-year term, (citizens) will compare the choice of a party which says it wants to achieve single-party rule (ND) with the choice of another party (SYRIZA), which I have no idea what it means when it speaks of progressive governance. Should Mr. Tsipras rule with (former finance miniter Yanis) Varoufakis? I don’t think the Greek people want to return to 2015,” the PM said.

TANEA Team 12 Σεπτεμβρίου 2021 | 19:54
Share
Δείτε επίσης
Περισσότερα άρθρα για Αγγλική έκδοση
Approximately 160,000 people in Greece today are afflicted with Alzheimer’s disease Editorial: Reminder
Unrepentant, Tsipras unleashed charges against the government and announced handouts Editorial: A return to the past
The country is in great need of stability., not electoral surprises Editorial: Normalcy
The EU’s adjustment of financial rules has facilitated the situation Editorial: Lessons
Editorial: The conundrum of early elections
It is common knowledge that all political parties seek the vote of Greece’s youth Editorial: Greece’s youth
In a democracy, elections cannot serve as a weapon for prime ministers Editorial: The need for electoral stability
Merkel’s statement should lead us collectively to a rethinking of what happened and not reflexive indignation Editorial: The price of imprudent politics
Self-tests, contact tracing key to safe re-opening of schools Spike in COVID-19 cases expected after schools open next week
The repercussions of these illegal actions are not limited to public health Editorial: A threat to society
September has arrived, but the University Protection Groups did not keep the rendezvous Editorial: Rendezvous
Theodorakis exemplified the sacred and mystical marriage of music and poetry The Greek nation bids farewell to beloved composer Mikis Theodorakis
One must be very careful in making choices that will influence the education of future generations Editorial: The time has come for a bold ‘yes’
Hellenic Statistical Service Staikouras for GDP – Strong recovery confirmed
Destroying a minority: Turkey's September 6-7, 1955 pogrom against the Greeks of Istanbul