The EU recovery fund creates substantial and realistic prospects for a re-structuring and re-orientation (assuming that there was an orientation in the first place) of the battered Greece economy. 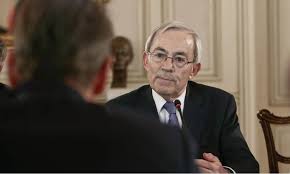 In the years of the bailout memorandums one of the most common complaints of European officials concerned Greece’s reluctance to “take ownership” of the economic adjustment programmes.

The answer to that criticism was to be expected and not entirely unreasonable.

How can you embrace a programme in the drafting of which you have not been allowed to participate and which has been imposed on you?

Today Greece has the opportunity to draft its own economic roadmap for the future.

With 31.9 billion euros in EU funding that the country will receive it finally has a chance to make a much desired leap forward into a new era.

The EU recovery fund creates substantial and realistic prospects for a re-structuring and re-orientation (assuming that there was an orientation in the first place) of the battered domestic economy.

The first draft of the plan crated by a commission headed by the Cypriot Nobel Prize winning economist Christopher Pissarides (photo) has already been sent to the European Commission and the final draft has been submitted to Prime Minister Kyriakos Mitsotakis for approval.

Such opportunities are rare and therefore the effort to overhaul the Greek economy must succeed.

There is no other way for the country to definitively transcend the recession wrought by the unprecedented public health crisis and to build the foundations for healthy and well-grounded development.

All political forces must realise that this plan will be the compass for Greece’s journey into the new era.

It is a national project that extends far beyond the term of a single government and should in no way be exploited to attain partisan objectives.

This must be a national plan both in word and deed. It is imperative.

TANEA Team 26 Νοεμβρίου 2020 | 23:03
Share
Δείτε επίσης
Περισσότερα άρθρα για Αγγλική έκδοση
People want answers, persuasive plans, and arguments Editorial: Maturation
The pandemic and citizens’ fears regarding inflation have shocked households Metron Analysis poll: SYRIZA trails New Democracy, KINAL-PASOK skyrockets
It is imperative for the weapons programme to be implemented immediately Editorial: Arrivals
The charges of the victim garnered attention nationwide Editorial: Support
Greece is a peaceful Western country Editorial: Vigilance
Both SYRIZA and PASOK are in a transitional phase Editorial: Changes
Tsipras posts on the social media and frequently as possible Editorial: Obligations
Universities have become a sort of state within the state Editorial: Enough is enough!
Nobody for whatever reason has the right to beat a professor Editorial: Zero tolerance
The shift in America’s priorities should come as no surprise Editorial: Fluidity
We have the weapons, the experience, and obviously the collective will Editorial: Transcending the pandemic
How do you negotiate with Vladimir Putin? Editorial: Dilemma
Editorial: Phenomenon
Maintaining tensions does not contribute to dialogue or good neighbourly relations Editorial: Pragmatism in Greek-Turkish relations
The alarm bell of daily life is urgently ringing Editorial: Alarm bell