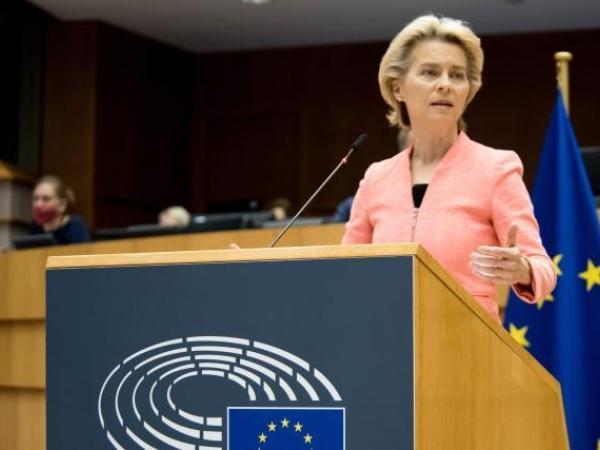 We have become accustomed to viewing EU bureaucrats in a tolerant manner and considering matters outside the nation-state as boring.

Yet the maiden State of the Union address of European Commission President Ursula von der Leyen was exceptionally political, substantial, and ambitious.

Von der Leyen did not mince her words about two issues of great concern to Greece in her speech before the European Parliament.

She stated that the chasm between the EU and Turkey is growing.

On the refugee-migration issue and the situation in Moria she declared that the Dublin Regulation concerning migration must be replaced by a new European migration management system.
Von der Leyen said that on both the Greek-Turkish and migration issues Greece and Cyprus can count on the EU’s absolute solidarity.
Regarding the coronavirus pandemic she called for a stronger European health union.

She also underlined two issues that she had stressed at the beginning of her tenure – the urgent need to confront climate change and the digital revolution.

She presented her vision that the EU should lead the way in transitioning from the current fragility to a new vitality and that major decisions should be taken with a qualified majority.
We have become accustomed to viewing the EU as timid, lacking resoluteness, and slow in acting.

That criticism is largely justified.

Nevertheless, contrary to the message of populists there is only one solution – building a stronger and more dynamic EU and it is worthwhile to fight to achieve that objective.

TANEA Team 17 Σεπτεμβρίου 2020 | 22:31
Share
Δείτε επίσης
Περισσότερα άρθρα για Αγγλική έκδοση
Tsipras posts on the social media and frequently as possible Editorial: Obligations
Universities have become a sort of state within the state Editorial: Enough is enough!
Nobody for whatever reason has the right to beat a professor Editorial: Zero tolerance
The shift in America’s priorities should come as no surprise Editorial: Fluidity
We have the weapons, the experience, and obviously the collective will Editorial: Transcending the pandemic
How do you negotiate with Vladimir Putin? Editorial: Dilemma
Editorial: Phenomenon
Maintaining tensions does not contribute to dialogue or good neighbourly relations Editorial: Pragmatism in Greek-Turkish relations
The alarm bell of daily life is urgently ringing Editorial: Alarm bell
We believe that the projections of scientists are exaggerated. They are not. Editorial: Living dangerously
It is up to us to exit the pandemic on our feet Editorial: Caution
The cost of a total lockdown would be very high for the economy Editorial: The need for personal responsibility, again
Banks – They secure short-term loans to provide new ones
Price increases in energy threaten the viability of businesses
Tax clearance certificate – What to expect in 2022