After the chaos that prevailed when SYRIZA was in power these stricter measures were necessary and public opinion approves of them. 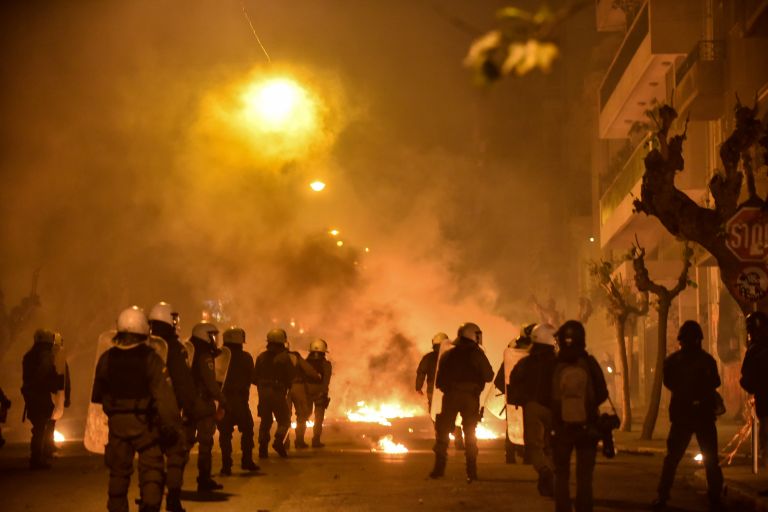 Citizen’s Protection Minister Michalis Chrisohoidis is dedicated. Lawlessness will come to an end. Thugs throwing Molotov cocktails have no place in a democratic society.

Universities will be handed back to university students and professors.

Occupied houses will be returned to their rightful owners.

The police presence in neighborhoods will be more intense.

The minister has promised that “citizens will see policemen in their neighborhoods every 10 minutes”.

After the chaos that prevailed when SYRIZA was in power these measures were necessary and public opinion approves of them.

However, there are two dangers. The one is that certain hot-headed policemen may believe that the need to impose order is a green light for arbitrary actions. There have already been some charges.

The minister is aware of all this and he has offered assurances that whenever there is a charge of police violence there will be a probe with sworn witnesses and it will be reviewed by the Alivizatos Committee. Moreover, the Ombudsman will have a section to review such charges.

The other danger is a decentralisation of lawlessness. While police struggle to put an end to the situation in which Exarcheia has become an impassable area for many one saw an anti-authority group causing mayhem in a Marousi shopping centre.

Also, what happened the day before yesterday with the police effort to reclaim the Kouvelos mansion and the deviant actions that followed is indicative.

One therefore needs an organised plan to handle such phenomena with patience, persistence and calm.

The aim of returning to normalcy cannot be achieved overnight. That is all the more so when certain asinine people inside and outside of Parliament continue to dispute the self-evident and provoke common sense.

Κοροναϊός : Νέα κρούσματα σε Γαλλία και Γερμανία – Έτοιμο σχέδιο δράσης στην Ελλάδα
TANEA Team 24 Δεκεμβρίου 2019 | 15:32
Δείτε επίσης
Περισσότερα άρθρα για Αγγλική έκδοση
Greece bolsters deterrent force, prepares response to Turkey’s expansionism
Health ministry undertakes campaigns to combat smoking, alcoholism, obesity
The president-elect of Greece has won people over even before assuming office Editorial: Modesty
Marinakis just dealt the final blow to the so-called ‘clean-up’ of Greek Football in front of UEFA/FIFA
The dialogue Marinakis to Grammenos: «You have been doing anything that Savvidis was telling you for such a long time and now you’ve become sensitive?»
President-elect Ekaterini Sakellaropoulou symbolises Greece’s passage to a new era with greater consensus and less toxicity Editorial: A victory for democracy
'Our country is governed by the rule of law and is a force of stability, growth, and culture' President-elect Sakellaropoulou to focus on defending rights, sovereignty
Turkey’s provocations are non-stop Editorial: Audacity
Hospitals should not be excluded from public-private partnerships Editorial: Partnerships
The government in Tripoli has said that Greece 'has nothing substantial to offer'. Haftar in Athens, Greece to veto EU approval of Libya peace deal if MOU with Turkey not canceled
The nominee has the prestige and wherewithal to serve the office in a worthy manner Editorial: Consensus
The last president who was not a politician was Christos Sartzetakis who served between 1985-1990 In historic move, Mitsotakis taps Council of State chief to serve as first woman president
Realism at all levels and in every way must be the only guide Editorial: Realism
Greece cannot be punished ad infinitum for the errors of the past Lower primary surplus targets key to Greek economic growth
Indian slaves swap life of bondage for seat in boardroom at tea plantation