The abandonment of plans for a Cyprus settlement combined with the fact that Turkey is distancing itself from the EU with Erdogan's tougher stance are swiftly moving toward a final divorce that will not be smooth. 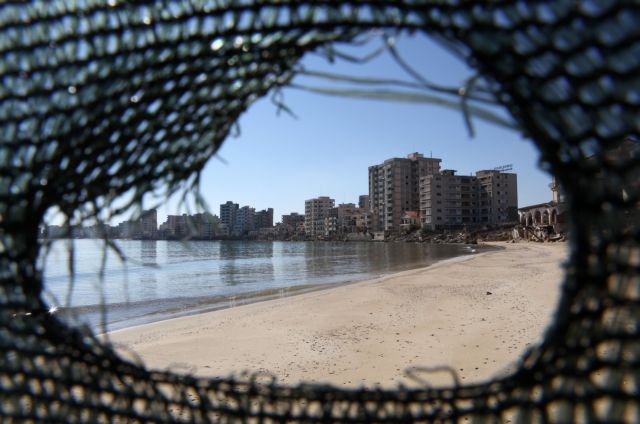 There is a spectre haunting Cyprus.

It is the spectre of the establishment in perpetuity of two states - which is to say the end of the goal of over four decades of basing a Cyprus settlement on the creation of a bi-zonal, bi-communal federation - through the final partition of the island.

There are a number of indications of this. Turkey’s provocative and illegal actions in the Exclusive Economic Zone (EEZ) of the Republic of Cyprus aim to create a de facto situation which neither Nicosia nor Athens can overturn with their demarches, and which the EU cannot avert with resounding condemnations.

On the other hand, the declarations of the Turkish-Cypriot administration that it will open the fenced-off ghost city of Famagusta to experts is reminiscent of the late Turkish-Cypriot leader Rauf Denktash’s sudden decision in 2003 to open the crossings between free Cyprus and the Turkish-occupied north.

The idea of opening up the city has charmed businessmen who are close to Turkish President Tayyip Erdogan - and who are already doing business in the occupied territories - as they dream of turning Varosha, the abandoned southern portion of the city, into a gamblers’ heaven, a new Las Vegas.

The argument that perpetuation of the status quo on Cyprus benefits the Greek-Cypriot side or at least will not change the geopolitical realities is collapsing due to the gas and oil deposits discovered in the Eastern Mediterranean and Turkey’s insistence that they must be exploited in concert with Ankara.

The abandonment of plans for a Cyprus settlement combined with the fact that Turkey is distancing itself from the EU with the tougher stance of the Erdogan regime are swiftly moving toward a final divorce that will not be smooth.

Moderate voices on all sides are ever more being drowned out by those of opponents of any compromise.

The world, however, and even more so Cyprus, cannot endure another wall.

TANEA Team 21 Ιουνίου 2019 | 16:26
Share
Δείτε επίσης
Περισσότερα άρθρα για Αγγλική έκδοση
The alternate interior minister said problems with COVID-19 self-tests will be resolved by the end of May Government poised to abolish mandatory SMD to leave home, working to solve self-test problems
If Syriza believes it can garner political gains with daily political transformations it is sorely mistaken Editorial: Political vertigo
Santander Consumer Finance begins activities in Greece
Evangelos Marinakis: Post-Covid Shipping and the Environment – Green Energy Investments
The US ambassador says Biden has “opened up a new vocabulary of cooperation” with Greece Pyatt see deeper US-Greece strategic ties under Biden administration
The case will be re-tried in the framework now set by the Council of State Bombshell Council of State ruling accepts state’s vaccine side-effect liability
May Day should be honoured with a single march each year Editorial: Unity
Transcending the collective crisis will require leadership and not troublemakers Editorial: Messages
After a six-month shutdown, workers in the restaurant business laid the tables Editorial: The first step
The government has repeatedly said that the existing framework is outdated Battle royal looms over government bill overhauling labour relations, limiting strike action
The labour trade union movement is an invaluable and irreplaceable weapon of workers An urgent need for the rebirth of the trade union movement
Editorial: The pendulum of American politics
The thirty-somethings rushed to be vaccinated for the sake of their families and their friends Editorial: Front-and-centre
The parliamentary vote on approval of the plan’s implementation is expected before Easter Editorial: Liquidity
Turkey is keenly aware of the fact that there is a new player on the geopolitical chessboard Editorial: A just act