The centre-left owes a debt of gratitude to SYRIZA because its attempts to pillage it ended up rallying it together. 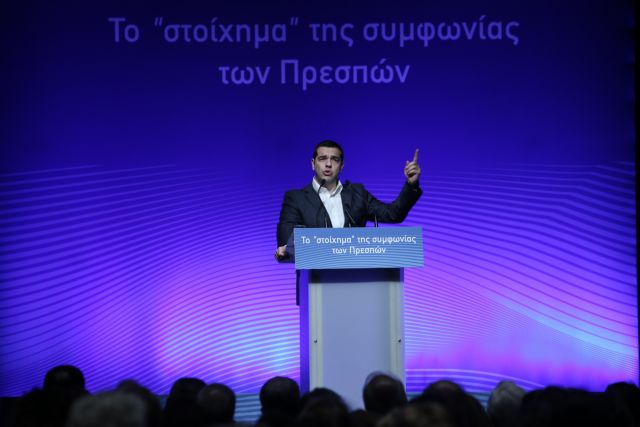 Just a few days ago, a cabinet minister who is said to have expertise in opinion polling predicted the electoral annihilation of the centre-left in the next general election.

This issue is not that the minister will be belied by the election result as all surveys indicate. It is that his statement reminded us that the creation of a progressive front that the ruling party is preaching is not being pursued based on ideological convergences but is instead based on vote-mongering and on an effort to pillage the political base of the centre-left.That is why it is failing miserably.

The ruling party has not learned its lesson. SYRIZA hastended to exploit a political interview with a prominent constitutional law professor, Nikos Alivizatos, who has longstanding ties to the centre-left, to suggest that he has been promised some position or office.

Alivizatos’ categorical denial demonstrated once again that SYRIZA is courting the centre-left in the wrong manner.
The case highlighted the fact that no distinguished member of the centre-left has responded positively to SYRIZA’s cunning invitation, which has fallen by the wayside.

From that perspective, the centre-left owes a debt of gratitude to SYRIZA because its attempts to pillage it ended up rallying it together.

The attempt to break up the centre-left united it and it shut its doors and windows. That is because the democratic part of the political spectrum will always be the country’s dominant progressive force.

TANEA Team 7 Μαρτίου 2019 | 18:59
Share
Δείτε επίσης
Περισσότερα άρθρα για Αγγλική έκδοση
Mario Draghi has a prominent position in the EU architecture Editorial: Alliance
After a certain point, the necessary caution is a matter of personal responsibility Editorial: COVID-19 and personal responsibility
Extremists still constitute a threat Editorial: Threat
A consciously responsible stance is needed Editorial: Maintaining COVID-19 alertness
The late PM Constantine Karamanlis famously said, 'We belong to the West' Editorial: Contradictions
The end of EU enhanced fiscal supervision signals the exit from the tunnel Editorial: Breakthroughs
Head of Greek Pomaks’ Association rips into Erdogan’s revisionist expansionism
All Greek governments since Andreas Papandreou's demanded the return of the Marbles Osborne: ‘Deal to be done’ on sharing Parthenon Marbles
All efforts toward a radical resolution of the refugee problem have failed Editorial: The end does not justify the means
France's centrist forces are rallying behind President Emmanuel Macron Editorial: The political centre
The Germans are returning, this time not to impose their will but to cooperate Editorial: Greece as a bridge between Western Balkans, EU
The demographic crisis must be managed swiftly Editorial: Demographic crisis
There was a Jewish presence in Thessaloniki even in antiquity, and the Apostle Paul preached in its synagogue Leon Saltiel: Glimmers of hope in battling Greek antisemitism
Investment will also play a pivotal role Editorial: The dynamic of the Greek economy
Universities will be given more control over their affairs Editorial: Reforms must be implemented swiftly