If the police are unable to isolate a small number of troublemakers, either they are incompetent or they are executing instructions unrelated to maintaining order issued by their superiors. 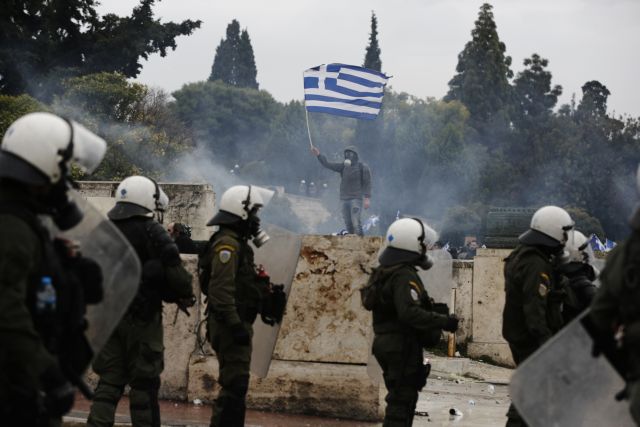 The Prime Minister changed his narrative this time about the protest against the Greece-FYROM Prespa Agreement. Now the story is that all who participated were not from the far right, but it was they who set the tone of the demonstration.

Even if that were true, nothing justifies the injury of dozens of protesters or the fact that the tear gas that was used targeted the crowd indiscriminately. Such tactics are simply a display of authoritarianism.

The extreme elements referred to in the statement issued by the Prime Minister’s office were indeed present, but they were only a few dozen. That in no way justifies the extent of the reaction by police.

If the police are unable to isolate a small number of troublemakers, either they are incompetent or they are executing instructions unrelated to maintaining order issued by their superiors.

Responsibility must be attributed at the political level for the excessive use of tear gas and injuries.

Instead of issuing statements to justify police violence, the government should account for what occurred and apologise to the demonstrators who gathered in Syntagma Square for a peaceful protest. It should also remember what it was saying about such incidents when SYRIZA was in the opposition.

That is the least that the government has a responsibility to do.

Ζέτα Δούκα: Δείτε τι έκανε μαζί με την κόρη της
TANEA Team 21 Ιανουαρίου 2019 | 12:37
Δείτε επίσης
Περισσότερα άρθρα για Αγγλική έκδοση
In the economy words can help shape the climate but deeds yield results Editorial: Profile
Democracy has a duty to defend itself Editorial: Adventure
Editorial: Pillar
Editorial: Crisis
Government and opposition are skirmishing over the rubble in Mati Editorial: Duty
As it turned out Mega was too big to die Editorial: The return of Mega Channel
The government cannot address the problem of school violence on its own Editorial: Wave of violence
Job creation is the overarching aim so that society can prosper Editorial: Automatic pilot
Right now there must be delicate diplomatic manoeuvres abroad and a solid front domestically Editorial: Consensus
Editorial: Delusions
Editorial: Readiness
It seems that freedom of speech cannot be taken for granted in our country Editorial: Fascism
At last it seems that reason is prevailing over belief and superstition about vaccines Editorial: Sirens
Dialogue must continue to be a basic pillar of Greek foreign policy Editorial: Dialogue
SYRIZA links Oruc Reis incident to Turkey's disputation of Greek sovereignty over Aegean islets