Tsipras also accused New Democracy of tolerating the attacks and death threats issued by ND cadres and sent to MPs who plan to support the government. 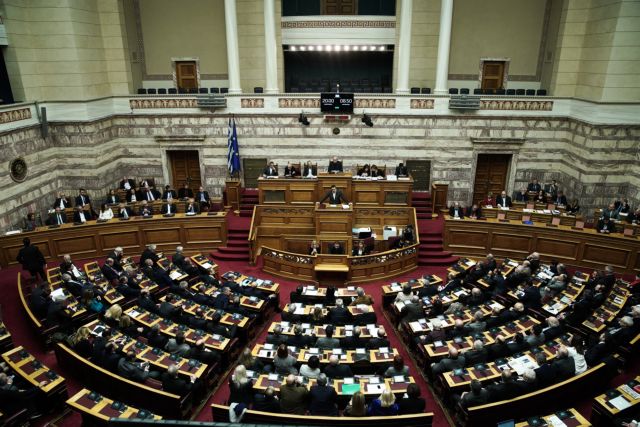 Prime Minister Alexis Tsipras and main opposition leader Kyriakos Mitsotakis crosses swords with furious rhetoric and shouting on a wide array of government policy from the economy to the Greece-FYROM Prespa Agreement, in the context of the debate on the confidence vote requested by the PM, which will be held at midnight on 16 January.

A central part of the debate consisted in mutual recriminations about the transfer of MPs from one party to another for the sake of personal political gain.

Tsipras said he disagrees with but respects Independent Greeks leader Panos Kammenos’ withdrawal from the government, even as Mitsotakis claimed that SYRIZA and Kammenos’ party have effectively merged, as two MPs of the ex-defence minister will support the government in two crucial votes that will determine whether the government survives – the 16 January confidence vote and the subsequent vote to ratify the Greece-Fyrom (Prespa) naming agreement.

Tsipras stressed that he is the prime minister that led the country out of the bailout memorandum era while tending to the needs of those in lower income brackets, who have been hit hardest by the decade-long crisis.

Mitsotakis and centre-left Movement for Change leader Fofi Gennimata, in turn, blasted the government regarding the over-taxation that has continued under the SYRIZA-Independent Greeks government.

“You have the audacity to speak of a patchwork government (due to the MPs borrowed from other parties for the two parliamentary votes). Apostates are those who leave and not those who remain in the government,” Tsipras shouted at Mitsotakis. He went as far as to call Mitsotakis to task about calling MPs who switched camps as apostates, an allusion to the fact that the ND leader’s own father was considered that in the 1960’s when he left Georgios Papandreou’s Centre Union party along with many other MPs to form a new government.

Tsipras also accused New Democracy of tolerating the attacks and death threats issued by ND cadres and sent to MPs who plan to support the government in the confidence vote and in the ratification of the Prespa Agreement.

He said photos of women with their heads crushed were sent to deputy public order minister Katerina Papakosta and he demanded that Mitsotakis condemn these actions.

The PM said that New Democracy at first tolerated and then organised an operation to terrorise MPs.

“A heavy responsibility burdens Mr. Mitsotakis, who wants to divide the people. In recent days particular colleagues (MPs) who want the government to remain in power were targeted with threatening messages,” the PM said.

The prime minister fervently defended the Prespa Agreement which was negotiated by ex-foreign minister Kotzias, as being in the national interest, as it resolves a key foreign policy  problem that has bedeviled the country for over a quarter century.

Tsipras said that the agreement is the second greatest accomplishment of his government, after shepherding the country out of the bailout era.

“With a sense of patriotic duty we upgraded the country’s leadership role in the Balkans and the Eastern Mediterranean in a difficult period, with great turbulence and major clashes,” he said.

He said he is certain that the bilateral agreement concluded with Skopje is right and patriotic.

TANEA Team 15 Ιανουαρίου 2019 | 16:10
Share
Δείτε επίσης
Περισσότερα άρθρα για Αγγλική έκδοση
Editorial: Audits of politicians' wealth
Mario Draghi has a prominent position in the EU architecture Editorial: Alliance
After a certain point, the necessary caution is a matter of personal responsibility Editorial: COVID-19 and personal responsibility
Extremists still constitute a threat Editorial: Threat
A consciously responsible stance is needed Editorial: Maintaining COVID-19 alertness
The late PM Constantine Karamanlis famously said, 'We belong to the West' Editorial: Contradictions
The end of EU enhanced fiscal supervision signals the exit from the tunnel Editorial: Breakthroughs
Head of Greek Pomaks’ Association rips into Erdogan’s revisionist expansionism
All Greek governments since Andreas Papandreou's demanded the return of the Marbles Osborne: ‘Deal to be done’ on sharing Parthenon Marbles
All efforts toward a radical resolution of the refugee problem have failed Editorial: The end does not justify the means
France's centrist forces are rallying behind President Emmanuel Macron Editorial: The political centre
The Germans are returning, this time not to impose their will but to cooperate Editorial: Greece as a bridge between Western Balkans, EU
The demographic crisis must be managed swiftly Editorial: Demographic crisis
There was a Jewish presence in Thessaloniki even in antiquity, and the Apostle Paul preached in its synagogue Leon Saltiel: Glimmers of hope in battling Greek antisemitism
Investment will also play a pivotal role Editorial: The dynamic of the Greek economy