Kammenos has been replaced by Admiral Evangelos Apostolakis, until now Greece’s Chairman of the Joint Chiefs of Staff. 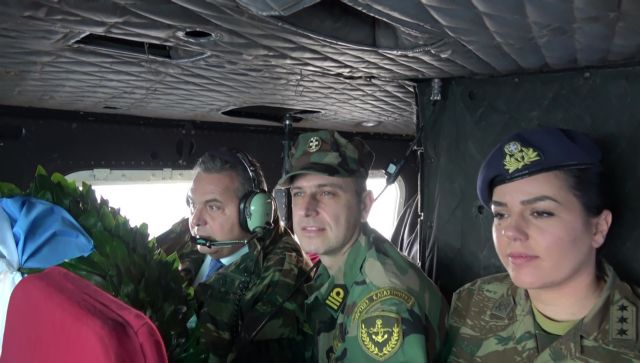 Prime Minister Alexis Tsipras is pursuing an express confidence vote in parliament after today’s resignation of his junior coalition partner, Defence Minister Panos Kammenos, whose Independent Greeks party, with the exception of two MPs, will not support the motion.

Tsipras had indicated before Kammenos pulled out of the government that if he loses the confidence vote he will call elections.

Kammenos made clear that he will support the government on other legislation unrelated to the Prespa Agreement.

Tsipras plans to rely on six MPs from other parties, including the two Independent Greeks members, to join his 145 MPs and form an absolute parliamentary majority.

The regular three-day debate period will be limited to two days.

Parliament Speaker Nikos Voutsis today received a letter from the prime minister requesting that he initiate procedures for a confidence vote and the Speaker will convene the Conference of Parliament (Deputy) Speakers with representatives of the parties to decide on the procedures to be followed.

The debate will begin on the morning of Tuesday 15 January as two days must pass between the tabling of the confidence motion ands the start of debate.

PM thanks Kammenos, ‘We did it together’

Earlier, the PM had issued a statement in which he thanked Kammenos for his service.

“For almost four years I had an honourable and earnest collaboration with Pano Kammenos. We all know that we come from different political families. We cooperated honourably and achieved many important things. We removed the country from the adventure of the (bailout) memorandums. For all that we achieved I want to offer my heartfelt thanks for his unparalleled contribution.”

His last flight in Imia vicinity

On the morning of his resignation Kammenos flew by helicopter to throw a wreath in the Aegean near where three Greek officers crashed in its waters during the January, 1996, Greek-Turkish Imia Crisis, when the two countries came to the brink of war.  He then tweeted about it.

“Final act from where the journey began at Imia now. Honour to the HEROES VLAHAKOS, KARATHANASIS, and GIALOPSOS and to ALL WHO FELL FOR FAITH AND FATHERLAND THE NATION BOWS BEFORE YOU,” the tweet read.

The ribbon on Kammenos’ wreath stated Defence Minister Panos Kammenos, and does not refer to the Greek government as a whole.

Kammenos has been replaced by Admiral Evangelos Apostolakis, until now Greece’s Chairman of the Joint Chiefs of Staff.
Turkish President Recep Tayyip Erdogan appointed his Joint Chiefs Chairman Hulusi Akar to the post of defence minister.
Apostolakis recently warned that if Turkish force were to land on a Greek islet or rock islet the Greek military would level the islet.

TANEA Team 13 Ιανουαρίου 2019 | 21:49
Share
Δείτε επίσης
Περισσότερα άρθρα για Αγγλική έκδοση
Mario Draghi has a prominent position in the EU architecture Editorial: Alliance
After a certain point, the necessary caution is a matter of personal responsibility Editorial: COVID-19 and personal responsibility
Extremists still constitute a threat Editorial: Threat
A consciously responsible stance is needed Editorial: Maintaining COVID-19 alertness
The late PM Constantine Karamanlis famously said, 'We belong to the West' Editorial: Contradictions
The end of EU enhanced fiscal supervision signals the exit from the tunnel Editorial: Breakthroughs
Head of Greek Pomaks’ Association rips into Erdogan’s revisionist expansionism
All Greek governments since Andreas Papandreou's demanded the return of the Marbles Osborne: ‘Deal to be done’ on sharing Parthenon Marbles
All efforts toward a radical resolution of the refugee problem have failed Editorial: The end does not justify the means
France's centrist forces are rallying behind President Emmanuel Macron Editorial: The political centre
The Germans are returning, this time not to impose their will but to cooperate Editorial: Greece as a bridge between Western Balkans, EU
The demographic crisis must be managed swiftly Editorial: Demographic crisis
There was a Jewish presence in Thessaloniki even in antiquity, and the Apostle Paul preached in its synagogue Leon Saltiel: Glimmers of hope in battling Greek antisemitism
Investment will also play a pivotal role Editorial: The dynamic of the Greek economy
Universities will be given more control over their affairs Editorial: Reforms must be implemented swiftly