Simitis has unwittingly been transformed into a symbol of resistance against all those who, armed with fake news and fetid propaganda, dream of becoming the Maduros or Erdogans of Greece. 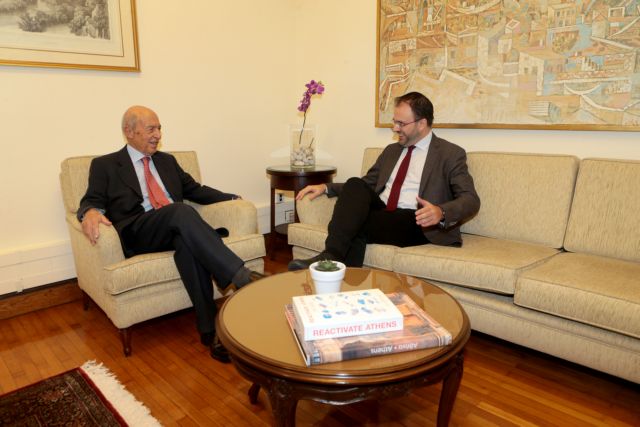 The phrase “Polakis Doctrine” has passed into Greek political argot.

Movement for Change leader Fofi Gennimata prefers to call it a “Goebbels doctrine”: Lie, sling mud, stir suspicions, and manufacture guilty parties. Even if it all collapses in the end, some of the mud will have soiled your opponents.

The latest victim of that doctrine is the Simitis family. “I hope he is proven to be totally clean,” said SYRIZA European Parliament Member Dimtris Papadimoulis, with more than a touch of hypocrisy, about the former prime minister.

He hastened to add that the former PM’s political responsibilities are extremely weighty, and that Simitis is one of the people who drove Greece to bankruptcy!

The political vulgarity of SYRIZA has exceeded all limits. The results of their efforts to stage another “Dirty ‘89” (the year PM Andreas Papandreou and ministers were put on trial) – using

selectively and arbitrarily various judicial decisions – are the opposite of what they seek.

As was evidence by yesterday’s meeting between Gennimata and Simitis, the amoral attack against the former PM resulted in the entire centre-left party rallying to support him. Simitis has unwittingly been transformed into a symbol of resistance against all those who, armed with fake news and fetid propaganda, dream of becoming the Maduros or Erdogans of Greece – jailing their opponents to remain in power.

However, in Greece the rule of law has not been abolished. Memory has not been obliterated, nor has common sense.

The former prime minister yesterday told Gennimata before the cameras that he hopes that the next time they will meet regarding more positive developments. He knew well what he meant.

TANEA Team 20 Νοεμβρίου 2018 | 14:17
Share
Δείτε επίσης
Περισσότερα άρθρα για Αγγλική έκδοση
Editorial: A calculated diplomacy
It is the duty of the government to immediately coordinate with the expert committee Editorial: Clarity
Greece's demographic problem is complex and requires political solutions Editorial: Anachronism
A businessman has the right to bar entry to his or her establishment of unvaccinated people Editorial: Reaching an understanding
Editorial: Privileges
The NATO Summit is bound to be newsworthy as it is Biden’s first Editorial: Lines
The government must ensure that the path toward modernisation will begin. Editorial: Changes
Covid free Kythnos island – 100% of the population vaccinated
Tourism minister in the Netherlands
There are strikes, like the one at the port, held just for the sake of declaring them Editorial: Conceptions
Ideally, we should fashion a new social and economic model for Greece Editorial: Model
The government must urgently undertake necessary initiatives to root out organised crime Editorial: Root out organised crime
COVID-19 vaccines and immunity: We are not among the lucky ones
Our era requires balances, seriousness, planning, and of course to defend one’s red lines Editorial: A coordinated foreign policy
The Turkish Foreign Minister confirms that the big goal is to convene a Mitsotakis – Erdogan meeting Exclusive Interview TO VIMA – Mevlut Cavusoglu: The “keys” for a solution