Medical doctor Pantelis Papistas, a member of the Pan-Hellenic Association for the Northern Epirus Struggle and a friend of Katsifas, said that the Albanian Special Forces encircled him, captured him, and dragged him for 70-80 metres and then shot him dead. 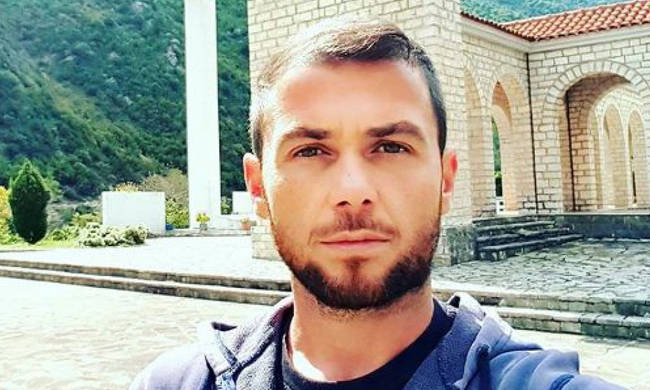 Albanian authorities have approved a request submitted by the family of Konstantinos Katsifas (Kacifa in Albanian), who was shot dead by Albanian Special Forces on 28 October, for a Greek coroner to perform an autopsy, following the intervention of the Greek Consulate in Gjirokaster, Albania.

The Katsifas case cast a chill over the entire Greek minority in Albania , which for decades has been the target (including Greek Orthodox Archbishop Anastasios)of nationalist political and media circles.

The killing took on an even greater emotional charge, as it occurred on the commemoration of the October 28, 1940, OXI Greek national holiday, commemorating the day when Greek dictator Ioannis Metaxas refused an ultimatum from Mussolini to surrender, and the Greek army pushed back Italian forces into Albania, forcing Nazi Germany to step in.

Ardiana Hobdari, the Albanian Ambassador to Athens, was summoned to the Greek Foreign Ministry, which delivered a demarche. Greek and Albanian Police, which have a longstanding cooperation, have also been in contact at the highest level.

The foreign ministry had issued a stern statement on the day of the killing, calling the killing “unacceptable”, and demanding a thorough investigation. That was followed by a tweet from Albanian PM Edi Rama, who described the deceased as an “extremist”.

Many Greek analysts and media have underlined that the Albanian Special Forces, which were brought in along with a helicopter to neutralise an armed Katsifas - who according to the residents of the village of Vouliarates (Bularat in Albanian) had been shooting in the air and according to Albanian police shot at them as well – had used excessive force and violated internationally accepted rules of engagement for police.

Several residents of the Greek village of Vouliarati have claimed that Katsifas was “executed at close range” following his arrest.

The Greek minority is recognised under Albanian and international law, and has the right to Greek education, to celebrate Greek national holidays, and to hoist the Greek flag, which according to some accounts was what triggered the incident.

Video shot during the incident

In a brief video that aired yesterday on “Open” television in Greece, and which was shot from inside a café in the village, one hears gunshots and sees Katsifas  holding with both hands what appeared to be a Kalashnikov, while reportedly  running to escape Albanian police, who were in pursuit, and attempting to hide behind parked automobiles, as continuing gunshots are heard.

The final act occurred at the village aqueduct, to which Katsifas had run. He  was encircled by heavily armed Special Forces and shot dead.

A number of residents of the village of Vouliarati have asserted that Katsifas was first captured and then executed in cold blood.

Medical doctor Pantelis Papistas, a member of the Pan-Hellenic Association for the Northern Epirus Struggle and a friend of Katsifas, said that the Albanian Special Forces encircled him, captured him, and dragged him for 70-80 metres and then shot him dead.

“On that mountain you find the way he was executed because we are talking about an execution plan. After he was heavily wounded, he must have been dragged for 60-70 metres, because there were blood stains on the earth over that distance. As the Albanian media reported, shortly before he was killed he shouted ‘Long live Greece! Long live Hellenism!’ That is when he was executed with the deathblow,” Papistas said.

‘They purposely executed my son’

Vasiliki Katsifa has told journalists that she is convinced that her son was purposely killed and that Albanian police had targeted him because he yearned for “mother Greece” and had expressed that sentiment by placing flags in the village over the last 5-6 years, when he was visiting from his residence in Ioannina.

“My child had had no problems with police. He simply raised the flag for Greece and decorated the village (where there is Greek military cemetery) for our heroes. They don’t like Greece here,” she said, noting that she had told him in the past that his life might be imperiled by his activity.

“I told him to be cautious, but he was not afraid and told me he was doing nothing wrong.”

The mother said that Albanian police broke down the door and raided her home shortly after her son was killed.

She said that the entire incident was designed “first of all to intimidate the Greek community”. “They wanted to break down my child…I will remain strong for Greece and Northern Epirus (as southern Albania is known in Greece).

Greek attorney Kostas Giovanopoulos has been hired by the family to assist them in pursuing their lawsuit against Albanian police.

The lawyer said that there have been conflicting accounts about the incident and that Albanian authorities have not formally released any information.

He confirmed that the family has blocked Katsifas’ burial pending an autopsy by a Greek coroner.

The initial lawsuit filed by the family against the police was dismissed by an Albanian prosecutor.

«Συγχωροχάρτι» από τους συνδικαλιστές για τον ένοπλο αστυνομικό στην ΑΣΟΕΕ
TANEA Team 31 Οκτωβρίου 2018 | 15:57
Δείτε επίσης
Περισσότερα άρθρα για Αγγλική έκδοση
Editorial: Pillar
Editorial: Crisis
Government and opposition are skirmishing over the rubble in Mati Editorial: Duty
As it turned out Mega was too big to die Editorial: The return of Mega Channel
The government cannot address the problem of school violence on its own Editorial: Wave of violence
Job creation is the overarching aim so that society can prosper Editorial: Automatic pilot
Right now there must be delicate diplomatic manoeuvres abroad and a solid front domestically Editorial: Consensus
Editorial: Delusions
Editorial: Readiness
It seems that freedom of speech cannot be taken for granted in our country Editorial: Fascism
At last it seems that reason is prevailing over belief and superstition about vaccines Editorial: Sirens
Dialogue must continue to be a basic pillar of Greek foreign policy Editorial: Dialogue
SYRIZA links Oruc Reis incident to Turkey's disputation of Greek sovereignty over Aegean islets
The state is obliged to determine which groups are serving humanistic ideals and which are simply exploiting human misery Editorial: Investigation
Electronic prescriptions a much-needed push toward digital modernisation