The Ruler of Dubai was received in Ankara yesterday as a messiah, with the hope that investment will save Turkey from economic disaster. However, few economists believe that. 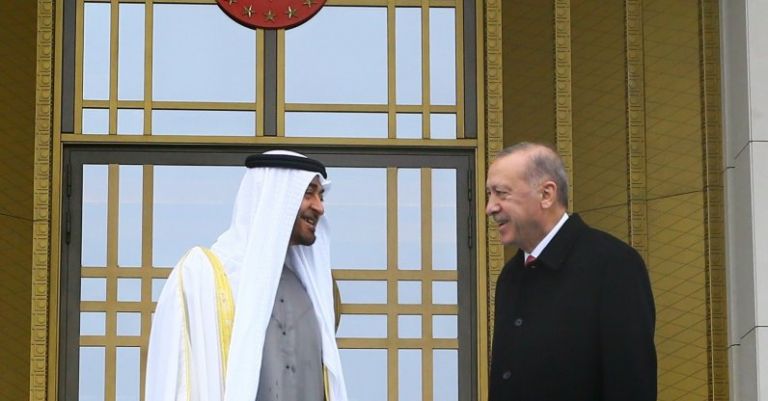 It is ironical, yet at the same time instructive.

The historic 23 November plunge of the Turkish lira was triggered by the decision of Recep Tayyip Erdogan the previous day to declare an “economic war of independence”.

The dangerously amateurish Greek government in 2015 sought to declare a similar war, and it almost sank the country.

The reason that Greece managed to stand on its feet – whereas no one can guarantee Turkey’s future – is of course our participation in the common currency.

Whether in order to avert a domino effect or in order to help our country, without which the European family would lose an important part of its identity, our EU partners hastened to support the embattled Greek economy.

Although the Greek people had to make great sacrifices, and despite the fact that the ideological extremes in the Greek political system were strengthened for some time, our country is once again secure and strong.

Turkey, on the other hand, is being held hostage to ignorance, paranoia, and fanaticism. Moreover, it stands alone.

It is characteristic that the Ruler of Dubai (photo) was received yesterday as a messiah, with the hope that investment will save Turkey from economic disaster. However, few economists believe that.

Erdogan’s insistence on keeping interest rates low, which led him to fire over time three of the country’s central bankers, will ineluctably lead Turkey, sooner or later, into the embrace of the IMF.

TANEA Team 25 Νοεμβρίου 2021 | 14:44
Share
Δείτε επίσης
Περισσότερα άρθρα για Αγγλική έκδοση
A coarse opposition stance is ill-advised Editorial: Seriousness
We have the weapons. We have fine scientists. We have the experience. We can. Editorial: Urgency
There were delays and tragic omissions in offering proper services to patients Positive Voice in a rough terrain: A look back at the history of HIV/AIDS in Greece
Greece has a multi-faceted policy in its foreign relations and that is how it should continue Editorial: Sobriety in foreign relations
We see irresponsible behaviours and an attitude that the virus is no longer with us Editorial: Behaviours
The virus recognises no geographical borders Editorial: Nobody is safe
Delays and foot-dragging have long led even to the denial of justice Editorial: Expediting justice
Turkey traditionally exports its domestic crises Editorial: Turkey's domestic, foreign crises
Nobody has the right to deny their share of responsibility in the common effort Editorial: Joining forces to confront the pandemic
Of intubated patients, 83 percent are unvaccinated or partially vaccinated EODY: 105 COVID-19 deaths, 7,287 infections confirmed in the last 24 hours, 608 intubated
We must continue to insist that the state is obliged to be citizen-friendly Editorial: 'Guinness World Record'
Behind Lukashenko stands Putin, who backs and assists him Editorial: European sovereignty
The pandemic is an issue of life and death, and the protection of public health is a common aim Editorial: Consensus on managing the pandemic, even at the last minute
The measures announced are tantamount to an at least partial lockdown on the unvaccinated Mitsotakis announces partial lockdown on unvaccinated citizizens, tougher enforcement
Greece accuses Sanchez of ignoring EU decisions after agreement to sell aircraft carrier to Turkey