Sanchez extolled the level of Spain-Turkey bilateral ties, noting, 'As my friend [Mr] Erdogan said, there are few countries that have such meetings at the highest level.' 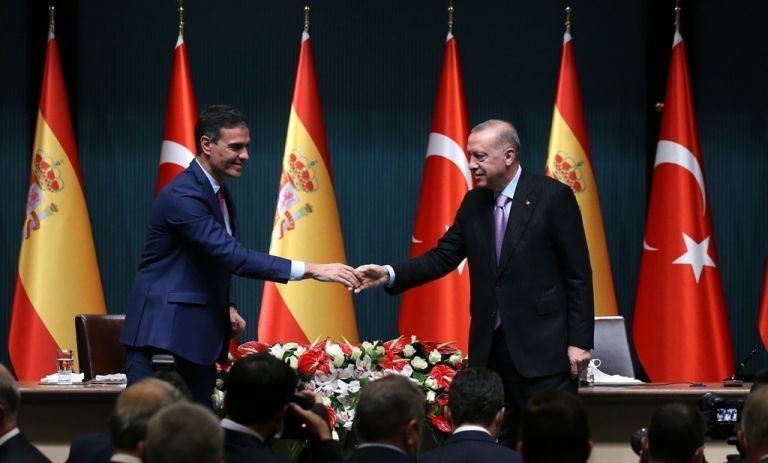 Greece has expressed its intense consternation over the stance of Spanish Prime Minister Pedro Sanchez in seeking an upgrade of Turkey-Spain cooperation, particularly in the area of defence, at a time when the EU and the international community have condemned Ankara’s provocations against EU member-states Greece and Cyprus and violations of international law in the Eastern Mediterranean.

Commenting on Sanchez’s talks with Erdogan in Ankara and an agreement for Turkey to purchase a large aircraft carrier from Spain, government spokesman Yannis Economou at today’s press briefing made clear the intense annoyance of the Greek government.

He underlined that the Spanish government is acting outside of the framework of EU decisions on the Union’s relations with Turkey.

“We were apprised of the remarks (of Sanchez and Erdogan) and we shall be monitoring developments…It is self-evident that (EU) member-states are bound by the decisions of the European Council as regards Turkey’s delinquent behaviour and violations of international law,” Economou said.

“The socialist prime minister of Spain was obliged to take into consideration the decisions of the EU,” Economou said, noting that the leader of Spain’s main opposition party has expressed his disagreement with a further tightening of Spain’s relations with Ankara.

At his joint press conference with Sanchez in Ankara, Erdogan stressed that with the procurement of a second, larger aircraft carrier, and possibly a submarine from Spain, the two countries’ defence cooperation will be strengthened

“The first aircraft carrier was not a large-scale one. We have agreed on the construction of a large scale (aircraft carrier), and perhaps, we will also enter into cooperation for a submarine,” Erdogan said.

“There is so much we can do in the defence industry, including armed and unarmed unmanned aerial vehicles,” he noted.

Turkey has expressed an interest in purchasing F-110 frigates, and Erdogan said that he wants to cooperate with Spain on other arms programmes as well, such as a new series of S-80 submarines that are being built by Navantia for the Spanish Navy.

The communique issued after talks between the Spanish and Turkish delegations, which Sanchez attended with a large number of cabinet ministers, refers to the two countries’ will to cooperate on joint projects for the construction of drones, land and naval weapons systems, and satellites.

Sanchez extolled the level of the two countries’ bilateral ties, noting, “As my friend (Mr) Erdogan said, there are few countries that have such meetings at the highest level.”

“This is our seventh meeting since the first in 2009, and there are important reasons for that. Turkey-Spain bilateral ties are very positive. More than 600 Spanish companies are in Turkey right now,” Sanchez declared.

Spain and Turkey over the last years have developed common interests in the Mediterranean region. They have strengthened diplomatic, defence, and economic ties that aim at Ankara garnering support within the EU and at Spain impeding France’s effort to have a dominant role in North Africa and the Near East.

In that context, the upgrading of Spain-Turkey defence ties effectively competes with the upgrading of Greece-France relations through their recent defence agreement, which includes a mutual defence pact.

TANEA Team 18 Νοεμβρίου 2021 | 18:35
Share
Δείτε επίσης
Περισσότερα άρθρα για Αγγλική έκδοση
We have the weapons. We have fine scientists. We have the experience. We can. Editorial: Urgency
There were delays and tragic omissions in offering proper services to patients Positive Voice in a rough terrain: A look back at the history of HIV/AIDS in Greece
Greece has a multi-faceted policy in its foreign relations and that is how it should continue Editorial: Sobriety in foreign relations
We see irresponsible behaviours and an attitude that the virus is no longer with us Editorial: Behaviours
The virus recognises no geographical borders Editorial: Nobody is safe
Delays and foot-dragging have long led even to the denial of justice Editorial: Expediting justice
Erdogan’s insistence on keeping interest rates low led him to fire three central bankers Editorial: Turkey’s lonesomeness
Turkey traditionally exports its domestic crises Editorial: Turkey's domestic, foreign crises
Nobody has the right to deny their share of responsibility in the common effort Editorial: Joining forces to confront the pandemic
Of intubated patients, 83 percent are unvaccinated or partially vaccinated EODY: 105 COVID-19 deaths, 7,287 infections confirmed in the last 24 hours, 608 intubated
We must continue to insist that the state is obliged to be citizen-friendly Editorial: 'Guinness World Record'
Behind Lukashenko stands Putin, who backs and assists him Editorial: European sovereignty
The pandemic is an issue of life and death, and the protection of public health is a common aim Editorial: Consensus on managing the pandemic, even at the last minute
The measures announced are tantamount to an at least partial lockdown on the unvaccinated Mitsotakis announces partial lockdown on unvaccinated citizizens, tougher enforcement
Anti-vax lawyer arrested for dissemination of fake news on COVID-19, then released