The agreement signed today includes a mutual defence pact and provides for Greece’s purchase of French next generation Belharra frigates, among other procurements. 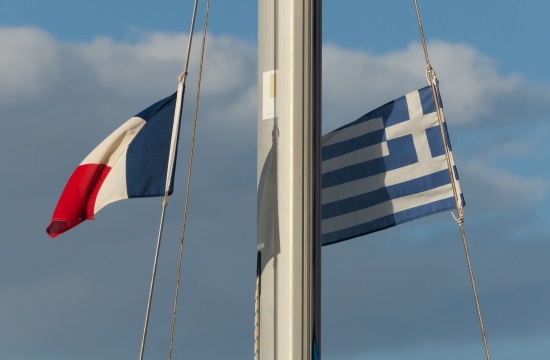 The further deepening of Greece-France relations is exceptionally positive.

The agreement signed today includes a mutual defence pact and provides for Greece’s purchase of French next generation Belharra frigates, among other procurements, in the framework of the new, revised proposal that was submitted by the French side.

No one can turn a blind eye to Turkey’s strategy of aggression and there is always a military component in deterrence.

Turkey has not abandoned its rhetoric regarding the so-called “Blue Homeland” (which poses a direct threat to Greek sovereign rights), and Greece cannot remain indifferent to Ankara’s effort to become a basic pole in the broader region.

The third and most substantial meeting in a brief timespan between Prime Minister Kyriakos Mitsotakis and French President Emmanuel Macron is linked to a parallel European signal that Turkish provocations are not just a unilateral Greek affair.

It activates a total European defence and exhibits decisiveness, especially due to the mutual assistance clause in the event of a threat to the signatories.

One might go a step further to say that in its entirety, the new Greece-France relationship that was sealed today with the signing of the agreement in Paris is a precursor to a real European defence in an emerging, new geopolitical terrain.

The agreement signed in Paris is a part of EU cohesion.

TANEA Team 28 Σεπτεμβρίου 2021 | 15:44
Share
Δείτε επίσης
Περισσότερα άρθρα για Αγγλική έκδοση
Meetings with President Katerina Sakellaropoulou, Archbishop Ieronymos Pope Francis to visit Cyprus, Greece in December
Evangelos Marinakis on CPLP’s bond listing at the Athens Stock Exchange: “Green investments are the future”
Washington concerned about religious freedom of the patriarchate in Turkey Vartholomeos has one-hour meeting with Biden: Religion, rights, and geopolitics on US visit
What a great thing it is to be fighting for your life even as you battle for the common good! Editorial: Standing tall
It is the greatest foreign policy crisis in Erdogan's 19 years in power Following domestic, international uproar Erdogan backs off on expulsion of 10 Western ambassadors
The UN Secretary has warned that humanity is already in a state of emergency Editorial: A duty towards our children
'The UK played a decisive role in achieving Greece’s independence' FM Nikos Dendias: Greece-UK bilateral cooperation agreement to include defence and security issues
Vartholomeos has fervently pursued inter-faith dialogue with the Muslim and Jewish faiths Religion, rights, and geopolitics on Vartholemos' US visit, meetings with Biden, Blinken, Pelosi
At Greek universities progress is battling regression. Editorial: Two worlds
Editorial: Opportunity
Angela Merkel – In Athens on October 28 and 29
If the pandemic is checked, we can hope for much better days Editorial: Turning point for Europe
Record-breaking over-subscription for CPLP bond issue
We have a duty to ensure for families a network of protection in our schools. Editorial: Maintaining balances
We have the power to leave behind this unprecedented crisis. Editorial: Exiting the pandemic